2014 Sept. 28: An emotional farewell for the recent victim of hate crime

It is a Sunday morning and like in most townships, the streets of Daveyton township are a buzz of activity.
Many carry bibles, making their way to different churches.

In the more quite section of Railway, a blue and white tent stands in a house at Victor Drive, and inside a handful of mourners have gathered.

Strangers, activists, relatives and friends came pay their last respects as they remembered and said their goodbyes. 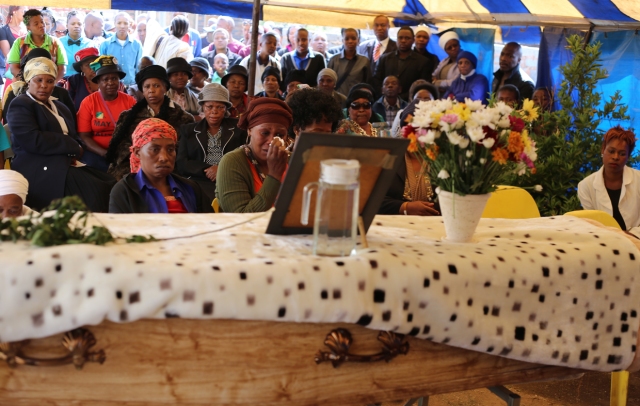 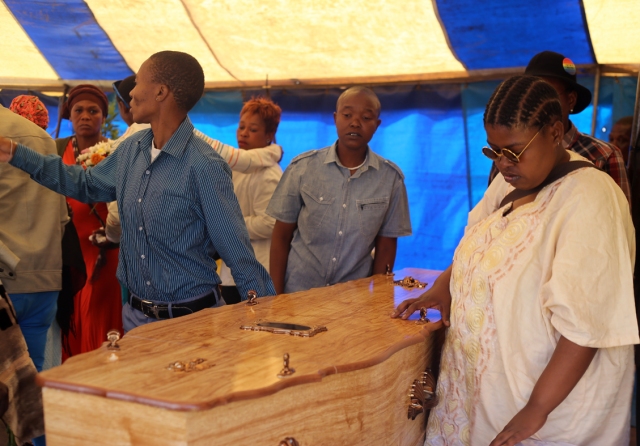 They came to bid farewell to Thembelihle Sokhela (28), the latest black lesbian, who was brutally murdered in a neighborhood she called home, after moving from her birth place in Kwa-Zulu Natal four years ago.

The funeral service of Lihle is led by members of Shembe church, dressed in their white regalia. They were singing their slow paced hymns. 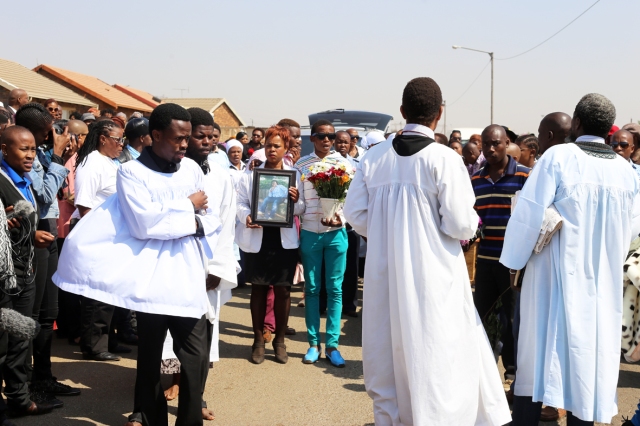 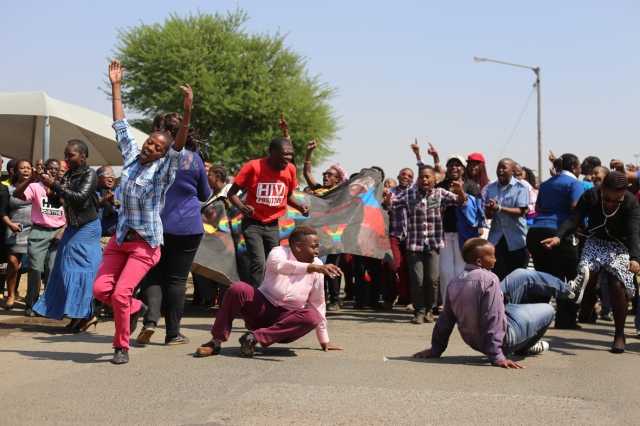 In the dying minutes of the service, some LGBTI members who had gathered outside the tent (having arrived when all seats were taken), started singing political songs, drowning out the pastor’s voice, while he tried to close the first part of the funeral service with prayer.

The group, much smaller in size compared with other South African funerals of murdered black lesbians such as Eudy Simelane (31), Noxolo Nogwaza (24), Mandisa Mbambo (34), Sihle Sikoji (19), Dudu Zozo (26) and recently Gift Makau (23), then proceeded to march halfway to Phumlani Cemetery.

The second part of the funeral still featured its share of competition between mourners who preferred to sing while others poured soil to close the grave, while the Shembe pastors wanted to read scriptures from the bible. 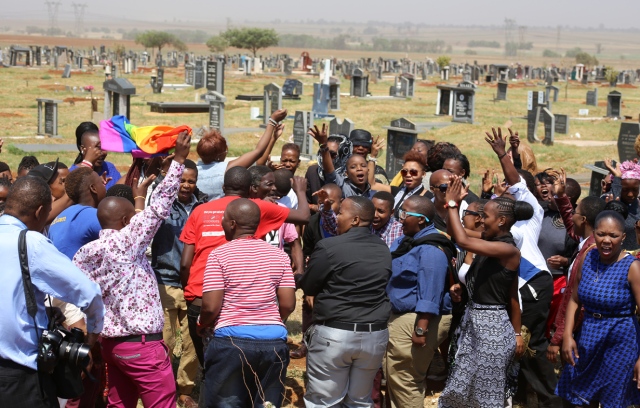 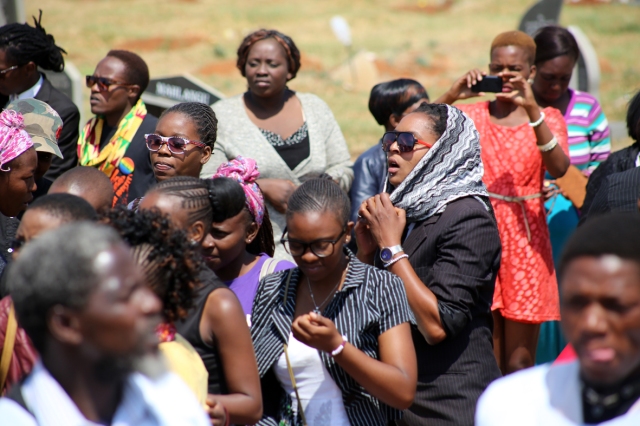 Lihle’s younger brother, Nkosinathi Sokhela (22) spoke after the funeral and said he had a very strong bond with his sister, having grown up together.

He describes her as a responsible person, who took care of them as younger siblings, and pushed him to study.

He shared his fondest memories of his sister and how she used to give him his baths as a little boy. Adding that she was currently taking care and looked after a relative who is ill. 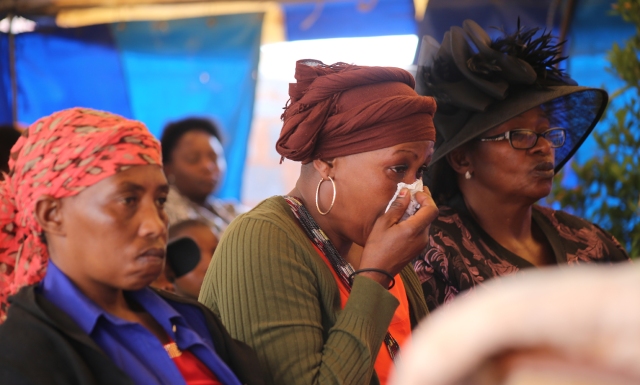 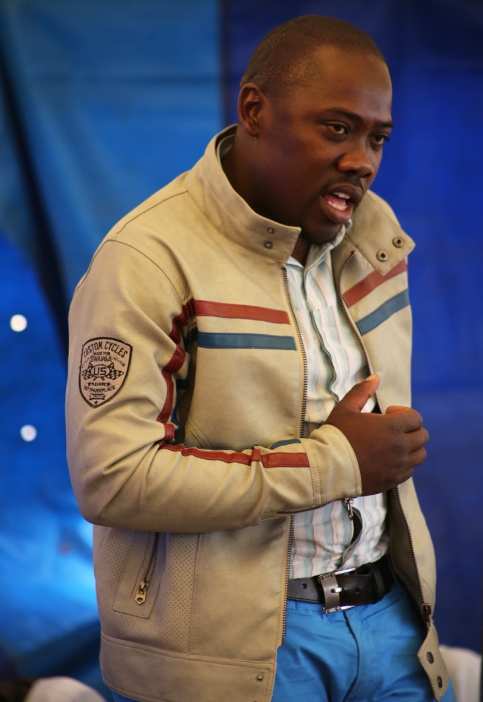 Nkosinathi also spoke about the different side he saw from his father (who was homophobic), the day Lihle eventually got the courage to come out to him.

“He just gave her a hug and told her everything will be well”, remembers Nkosinathi.

He said he was shocked to hear of Lihle’s senseless killing, five days after meeting with her at Carlton Centre.

“It was after her job interview, having completed her training for a security guard certificate,” he said and concluded by saying the family wants justice.

The funeral comes three days after a memorial service  was held at the same venue.

Lungile Dladla Skosana said, she is touched by what happened to Lihle as they share a similar experience.

Choosing to look at herself as a victor, rather than victim of hate crime. Lungi believes she survived to assist others.

Some members of the Women’s Ecumenical Conference, which is part of the South African Council of Churches, pledged their support for the LGBTI community.

The group is made up of mothers with homosexual and others with heterosexual children, among them Mally Simelane, mother of the late Eudy Simelane.

Representing the group at the memorial service, Thabisile Msezane said they educate and support parents who reject their homosexual children, because of being in denial.

She spoke about their campaign, “My child is my child, irrespective of sexual orientation” and reminded the LGBTI community that they are “fully protected by the SA Constitution.”

Thabisile said they are aware of the challenges faced by the LGBTI community.

She continued to say, “as mother, we say enough is enough, no more hate crimes.”

The mother concluded by saying it begins with parents and the names they call homosexual children in the community. 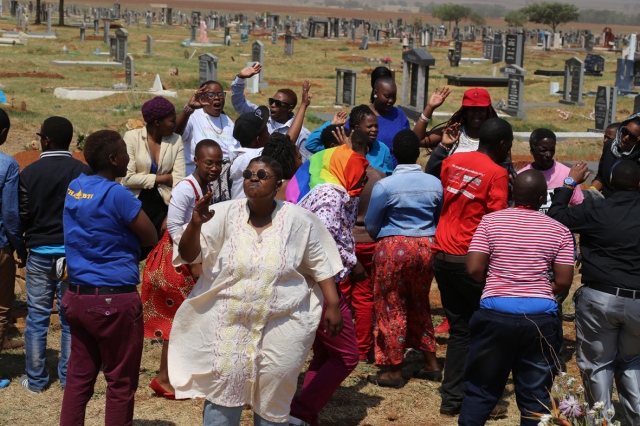 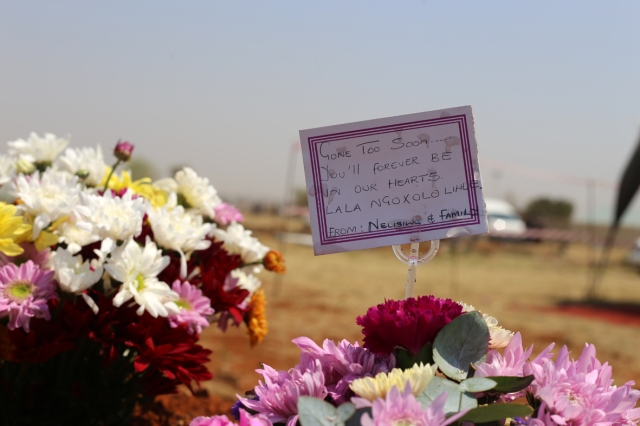 5 Responses to 2014 Sept. 28: An emotional farewell for the recent victim of hate crime