The group was invited to attend Faces and Phases (2006-14) book launch by Zanele Muholi held at the University of Cape Town, African Gender Institute on March 24, 2015. Thirteen group members  from the Silubala Safe Space, Kayamandi, Stellenbosch attended the launch and it was their first time to attend at such an event. Below are the views on the whole event from some members of the group. 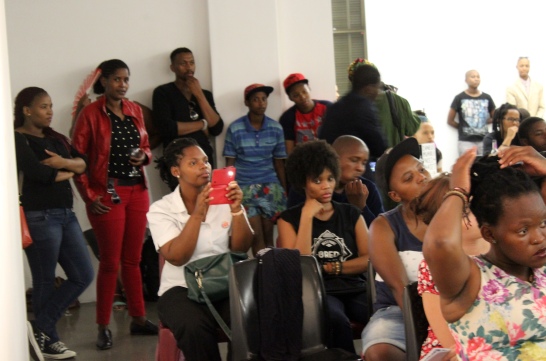 Nondi Vokwana (participant in Faces and Phases also an educator and author) of this vox pop at the book launch on 24.03.2015 Photos by Lindeka Qampi 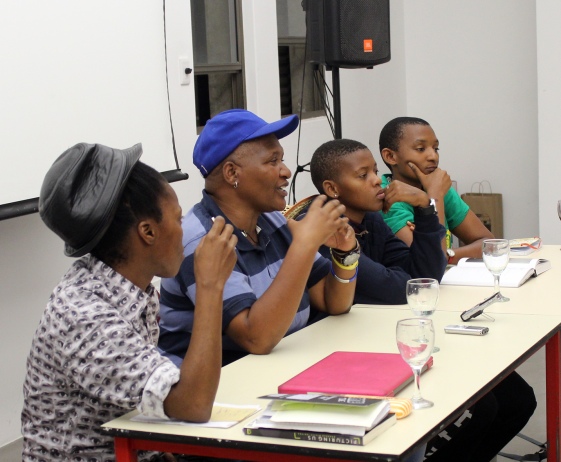 Four generations of lesbians: L-R. Muholi, Funeka Soldaat, Yonela Nyumbeka and Zethu Matebeni (who moderated the session of the launch)

“It was pleasant for me to be part of a high profile event with interesting dialogues, I find it fascinating listening to homosexuals voicing their views on our sexuality all in all it was educational”
– Khuliswa Mandindi

“To me the event was educational, encouraging and inspiring. One of the things I learned at the launch was when it was explained that you may see a butch lesbian and see a boyish looking girl, but if you look deep enough there is a story behind that good looking woman that looks like a “man”.
I think the reason it is called Faces + Phases is because lesbians go through a lot of painful and difficult things in life more than heterosexual people. I loved it when a woman from a homophobic African country said, “South Africans you are privileged because you can be united in one room and hold whatever event and still be safe, in my country all of us would be arrested or even killed.”
– Andiswa Nongenzi

“It was amazing to see good positive inspiring women in one place where no one was judged for who they are. I do not get exposed to such events and I was blown away from the event and to hear about the horrible things that happen to us homosexuals. I could not believe it. It is hard to understand how this country can be referred to as free, when we are prosecuted by fellow human beings on daily basis, for being who we are. I believe such events should be held often.”
– Bulelwa

I am happy to have attended the event in Cape Town as it was my second one after the December launch in Durban. I was grateful that we could come as a group, because Kayamandi is often over looked or neglected from such events when they happen in the Western Cape, since we are situated in the Boland region. Most of the group members come from disadvantaged homes and are not exposed to such events. I agree with Bulelwa that such events should be held often and especially in our township. Many of our community members need to be exposed to this and also know that we homosexuals are not animals but people. Just like the next person, we are blessed with talent and hunger for success regardless of our home situations. I felt so proud on our way home when the group couldn’t stop saying how excited and happy they were to attend such an event.”
– Nondi Vokwana

Thank you Faces + Phases for a great opportunity.