Our initial plan was to meet at Constitutional Hill, where we were supposed to do Faces and Phases 2016 follow up shoot. I ended up at Stevenson gallery in Braamfontein. I wasn’t sure if I should get in or wait outside because I’ve only been there when Zanele has an exhibition.

The security guard asked me why I’m there, I explained to him. I then asked if he knew Muholi. Security is tight there I must say, so I got inside and still I had to ring the bell so they could open another door for me. After they opened the door I went to the reception area, the were four people 3 females and a guy if I’m not mistaken. I told them I came to see Zanele Muholi and the guy told me to walk straight up and the 1st door on my right I should knock there. I don’t think I even knocked.

When I opened the door Muholi, Lerato and some lady were working. As always Muholi was all smiles and being her bubbly self saying Lesego ‘uswenkile’ we just laughed. I sat down, she spoke to that  which I forgot her name (not really good with names) about the follow ups while she was busy talking Lerato and I had our own chat she asked me where in Johannesburg do I live?
I explained that I don’t live there but I’m in a learnership in Johannesburg CBD, Zanele thought I said I live in Johannesburg but then I don’t blame her she has a lot in her mind.

Of course Muholi offered me something to drink and I took her coke. Put our bags in a safe place, she took her camera and put it in a strange bag saying abosikhotheni akafuni babone that she has a camera. It makes sense I mean, we live in notorious Johannesburg anything is possible to happen they can mug us especially if they saw that we had valuable  assets. Lerato, Zanele and I went out but Lerato was out to buy food as for me and Zanele we were hitting to New town that’s were my follow up shoot was going to take place.

I think Zanele wasn’t at ease with us walking, I could tell that she’s not comfortable. Whereas me on the other hand I was chilled and tried to make small talks for her not to think a lot about someone trying to rob her. On our way she kept telling me about her work, how she got to Market Photo Workshop where she studied photography.  We were meeting with another participant of Faces and Phases Phumzile Nkosi, while waiting for her Zanele asked me to standby the red lockers. She started taking photos of me saying she’s testing, said to me  ‘I want to break this fashion thing that you have’. The photos captured for testing looked perfect to me, I really love them. 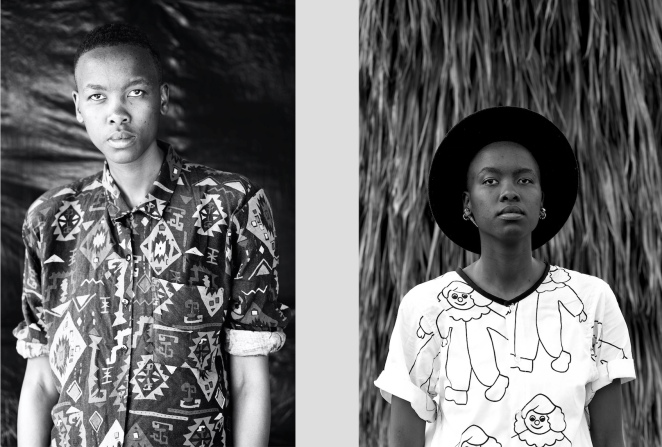 Lesego Masilela featuring in Faces and Phases series, photo on the Left was taken (2011) and Right one on (2016)

When Phumzile was done locking we all went outside, Muholi started taking more photographs of me, she instructed me on what to do. I struggled with what she asked me to do cause I don’t think I’m that photogenic. We moved to nearest place for more images took both me and Phumzile pictures. I don’t think she was satisfied about the photos cause she asked Phumzile to meet up with her the next day and the fact that the were dodgy guys passing were we were working I don’t think that made her comfortable at all.. Zanele loves joking and mostly we were all laughing at the things she kept saying.

Phumzile and her friend left and me and Zanele waited for an uber to come pick us up.