What a well organised and most dignified memorial service held at Bassline, Newtown for our dear friend Iko Mash. Transgender activist and media personality shocked many by her sudden passing. She passed away on Friday 21.07.2017. Friends and other personalities shared their tributes for Iko on social media and in the press.

The memorial service was put together by Quardrepublic, Thami Kotlolo’s communications company together with Iko’s close friends. The service was attended by many who knew her in person and those who did not know her personally. Most people took time off from work to attend the service as it was during the day. 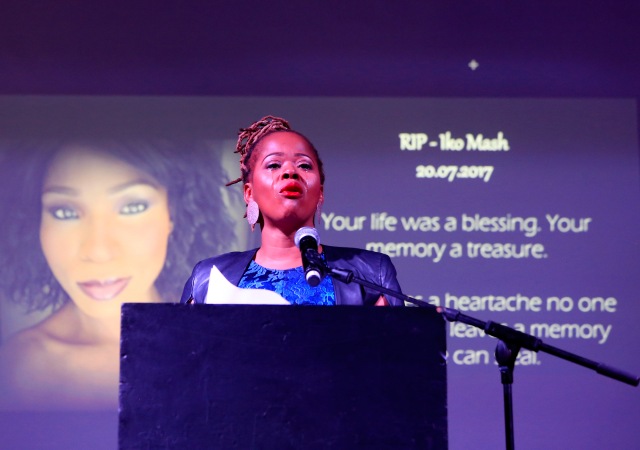 Andile Gaelesiwe couldn’t hold her tears as she read a eulogy by Lebo Kheswa, one of Iko’s friends…

On arrival we were given candles that were used during Kelly  Khumalo’s moving performance. First on the programme was my tribute video to Iko. It allowed me to share with everyone how I knew Iko. Memories with her and mostly what conversations we would have as South Africa’s most visible transgender people.

Mourners at the memorial service of Iko Mash

Immediately after my tribute video, there was a performance by Wanda Baloyi. Programme director for the day was Khumbulekhaya’s presenter, Andile Gaelesiwe. She was a close friend to Iko.
She then called upon the last remaining member of 3 Sum, Amstel Maboa to speak. Amstel contained his pain of losing his friend. He was so bubbly. After greeting everyone, he then shared his story of how he and Iko Mash met. “I met Iko 17 years ago through Koyo. Iko and I then became friends. I was never a person who uses make-up, but look at me today” shared Amstel.

Iko & Amstel’s friendship had it ups and downs. “We fought a lot, Iko was dramatic joh. You had to tolerate Iko” Amstel declared. He continued and mentioned that he was one of the people who did not see Iko on her last days but that does not mean that he wasn’t there for her. It also does not mean that he was less of her friend or did not love her enough.” When Iko found out that she was sick she shut the world out of her life, she chose not to be seen” Amstel concluded.

A journalist friend Sonia Motaung also spoke. “I met Iko 10 or 14 years ago, somewhere around those years. We used to go party at Kilimanjaro with Ikonand a lot would happen” cracking the crowd into so much laughter because of the jokes she made about the activities happened at Kilimanjaro.
She carried on about how having Iko in the public eye helped a lot of people to come out. Also how she also contributed as a friend to Iko to make sure that LGBTI people were featured in the media.
“Having Iko, Amstel, Koyo & Jeff helped a lot of people to come out, to be comfortable with their sexuality. I used to write about them all the time. I would take them with me every time I move to a new publication. I did it with Drum, City Press and Sowetan” – Sonia

Then there was Manaka Ranaka. A God sent individual to Iko’s family and friends. Manaka took care of Iko since she was diagnosed with cancer.  Manaka said she is devastated and traumatised by losing Iko. She was shaking on the podium. “It took me the whole week to write my tribute to Iko, and I still did not finish“. Said heartbroken Manaka.
She spoke of how their relationship was so strong and memories they shared together. Iko would even offer Manaka to help her with her script. This journey started from the soapie where they worked on together, Zabalaza and carried on to her current job on Generations; The Legacy.

“Iko treated me like her husband & wife. Today I choose to stand here and be her husband” said the sobing actress Manaka Ranaka. She went on to say that Iko taught her so much and she chose Iko over her children.

Emotional tribute from Manaka was followed by an amazing video inserts. The inserts took us through great memories of Iko Mash featured on Selimathunzi in the past years. Then the producer of the show spoke very fondly of Iko Mash. Even though he kept using the incorrect pronoun referring to Iko as a “he” in his speech. He was then corrected by a member in the audience Zanele Muholi to refer to our late transgender friend as “she”.

Joe went on to say Iko was very unapologetic and had so much power and presence. This is in support to everyone that spoke about her. “Iko had so much power, she would say do not mess around with me, I am here and you have to accept” referring to any situations where she would experience any type of phobias and harrasment.

Joe continued and said “She made unfortunate woman look beautiful. I am no make-up artist but I know it’s a hell of a job“.
Joe described Iko as someone who had a lot of dreams and he strongly believes that she made a mark. Some of her dreams did come true.
Joe was than followed by a very emotional performance by Kelly Khumalo that got people in tears. Kelly sang a song tittled Themba from her new album “My truth”.

Other speakers that went up to pay their tributes are Iko’s brother Sello Mashiloane. He was followed by Deputy Minister of Arts & Culture, Ms Makhotso Sotyu who unfortunately did not know the late Iko in person.
She was then followed by fag hag ANC NEC Member Ms Nomvula Mokonyane who spoke so fondly of Iko. She mentioned all the great things they did together. She went on to refer to Iko as the best. “Iko did my make-up and hair for the 2010 world cup gala dinner”, “even Basetsana Khumalo was jealous” she joked. She added saying that even the clutch bag was a gift from Iko that she had promised her long ago.

“All she wanted in exchange was from me was to distribute her business cards. She then concluded her speech by saying she can’t lie and say she understands what is Iko’s mother going through. “NO one will ever understand your pain unless they have lost a child. There is a biological connection between you and your child” words of comfort directed to Iko’s mom.

The service was wrapped up by Iko’s uncle and a sermon by Pastor Moema. Then light refreshments were served.

Iko Mash was born on the 31st of May 1975 and passed away on the 21st of July 2017 in the presence of her mother and close friend Ranaka Manaka.