I departed from South Africa on the 8th of July 2017 and arrived in London on the 9th of July. It had been a long trip and the body was naturally tired but was still functional.
I had to find my way around Heathrow Airport which is the largest airport I’ve ever seen.  Then I moved to the space with internet connection so I could get connected and be able to communicate with the team that was already in London after a successful opening of Zanele Muholi’s  solo exhibition of Somnyama Ngonyama at Stedelijk Museum, Amsterdam that took place on the 7th July 2017.

When Lerato arrived, we made our way into the city and upon catching up, I was updated about a tragedy that transpired in Amsterdam on 8th July 2017.
At the time, the video had already been posted on line and it had gone viral.  The faces and voices in the video were familiar to me.  It was our friends(names of the survivors are reserved because the matter is with the lawyers).  Muholi had invited to join her in Amsterdam at the opening of her solo exhibition. At first, I could not bring myself to believing that the video was true.  I kept asking if it was real. I could not understand how a human being would be so brutal to a group of defenceless young women.

My mind and body were in so much shock that I felt a little lump on my throat that blocked all the words that wanted to come out. It took us an hour to arrive in London where we would be residing for the rest of the trip. I kept looking outside the window to see the grand and colonial buildings. When we finally arrived at the station after we got lost and could not find our way, I was welcomed in London with open arms by Muholi. There was no time for catching up, we had to get ready and make our way to Rivington Place at the Autograph ABP Gallery to meet up with up a few locals so we could make our way to the UK Black Pride. It was an absolute delight, seeing people of colour gathered in one place to celebrate blackness and queerness was beyond satisfying.

Later that night when we arrived back at our residing place it dawned on me that something tragic had happened as calls and texts flooded Muholi’s phone and Lerato’s phone and the video of the Amsterdam incident continued to do the rounds on social media. The following day and the next couple of days, we spent indoors, the atmosphere was sombre for everyone and the team had to communicate with those left in Amsterdam. Things were spiralling out of control in Amsterdam and back at home. Each day something new came up and had to be attended to immediately. On the third day, we had to get out of the house to clear our heads and attended an exhibition on the Soul of a Nation: Art in the Age of Black Power at the Tate Modern, London.
It is always soothing to experience black art and it was exactly what we needed, to be out of the house for a few hours. The team (Lerato Dumse, Muholi & I) had to constantly adjust and continue with what we had to do in London whilst staying in interaction with what was going on in Amsterdam and back at home in South Africa.
Preparations for the opening on the 13th July 2017 had to ensue.  The artwork had already been printed and the displaying process was underway. Amidst the groundwork at the museum, interviews had been scheduled with media houses as well. 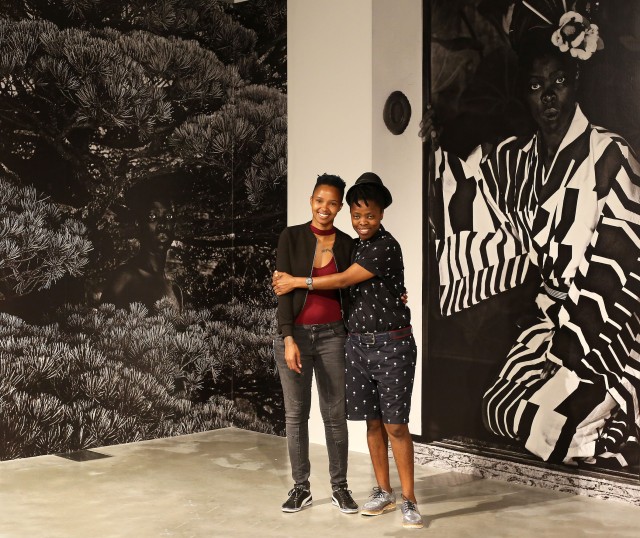 Portrait of the activists, Thobeka Bhengu & Muholi by Lerato Dumse at Autograph, London (2017/07/13)

Finally, the day of the opening of Somnyama Ngonyama had arrived, and the opening was sold out. I had to prepare my mind to focus on the opening and the important work that had to be done that day. I was ready to let the body communicate the injustices and discrimination that a black body has to constantly endure across the world. Using black latex gloves depicted in Muholi’s captivating portrait titled Phila, Muholi created a costume that I was wearing in the performance and the music created by two South African LGBTI artists Annalyzer and Genius Illusion. The music spoke directly to the moving body in that space and the context of Muholi’s work. Audiences gathered at the Autograph gallery to experience the breathtaking work of our very own Zanele Muholi. The opening was remarkable, the audience was left in awe of Muholi’s work and we had done what we set out to do. The opening raved of brilliant reviews and media coverage. 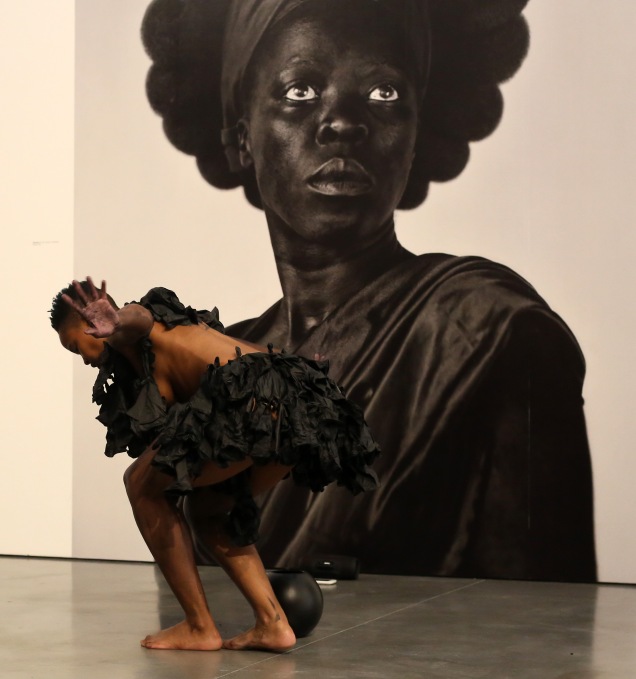 The next few days were more composed with talks, media interviews and walkabouts at the gallery. The highlight of my stay besides the opening had to be a casual and informative meeting with several queer artists in the UK, where we shared our background and the important work that we do. The meeting arranged by a queer activist and friends was held at an old church that has been turned into a residential area. It was a fruitful meeting that is yet to bare more fruits in the future.

A day before our departure from London, there was an artist tour of the exhibition and a closing ceremony that was arranged. I had to deliver my last performance, a lot had transpired in the week and we were all looking forward to get back home and be in our safe spaces for a few days.  As much as I did not get a chance to explore England, I am eternally grateful for the opportunity to have been a part of yet another historic display of Muholi’s work.

Thobeka Bhengu is a performance artist, activist, choreographer and an artistic director of the Rainbow Theatre Group in Pietermaritzburg, South Africa.

‘I’m scared. But this work needs to be shown’: Zanele Muholi’s 365 protest photographs

My year as a dark lioness – in pictures