It’s a Sunday afternoon as we hit the road departing from Johannesburg South Africa, destined to Maseru, Lesotho. Afrika is very beautiful and rich. We see mountains, lush and cattle everywhere. Who does all this land belong to though? Tambu Muzenda behind the wheel and Lerato Dumse taking shots from the front seat. I am providing a beautiful music Playlist to accompany the smooth ride. The weather is a mixture of hot, cold and rainy conditions.

Saturday January 26 I am told that we are going to Lesotho tomorrow. I say “okay” then after a while I think “tjo” – I was not ready for this. In fact I thought we would be going to Lesotho in February because we had postponed it before. We were supposed to have travelled to Lesotho on the 14th of January. We postponed due to funerals that occurred and also completed work we documented in Durban throughout December and early January.

The thought of going to Lesotho hits me again. I haven’t told my family that I’m going to Lesotho. My mom is cool but my grandmother is still under the impression that I am a drug smuggler. She cannot understand how anyone can be skipping the country so frequently and going as far as Europe for only a few days. To her this is painful and scary that her grandchild is doing a very dangerous job. Apart from her concerns, mine are travel anxiety and the thought of what I had planned for the rest of January.

I am supposed to be attending my cousin’s 30th birthday celebration. I featured on the program to speak on behalf of the family and also shoot the event. I managed to get fellow Faces and Phases participant Nonkululeko “Sicka” Mthunzi to cover the event on my behalf. The reason I asked Sicka is because just like my cousin, she lives in Daveyton and they met when I introduced them in 2016 during Sicka’s event Rock The Shades. Faces connect…

Sunday morning I tried to relax before facing the journey ahead. I open my eyes and find Glenda is sleeping here, when did she get here. We are supposed to travel with her and so I decide to rest as well. I didn’t sleep well because of distractions at night. I had to open for Lerato and later on for Thembela “Terra” Dick. I was concerned of their whereabouts and also wondering who is actually part of this trip to Lesotho. I’ve been asking myself if people are certain of this journey and why the sudden rush. I was concerned and confused and couldn’t verbalize it.

When I eventually wake up and take a shower it’s around 11am. Lerato said we need to get ready and I woke Glenda. In all the organized chaos that was taking place in my head I decide to meditate upon a safe travel and gave Terry Dhlamini, Prof Muholi and Terra tight hugs as they wished us a safe journey. I felt a dependence on their positive words and comforting embraces. Then I had to pick up my bags together with my mind and psych myself ready for the road ahead.

We listened to Metro FM the music blends allowing the mood to be calm. It’s green land left and right, healthy looking cattle are visible in numbers. Suddenly after hours on the road the radio just changed and the good music was replaced by a male voice speaking Afrikaans… The shock!

In the car we start talking about it. “That’s how they took the land,” I said. “The system works,” says Glenda. So much beautiful healthy land and cattle owned by who? I wonder…… We take the route via Ficksburg, it’s full of potholes. We saw someone stepping out of their car to examine the tires and we also saw an Audi that was being towed out of the weeds with the car body damaged. I hope no one died there, worry creeps in but I quickly dismiss it. Let’s keep going. Through all the potholes and different weather changes we made it safe to Lesotho.
Jah bless! 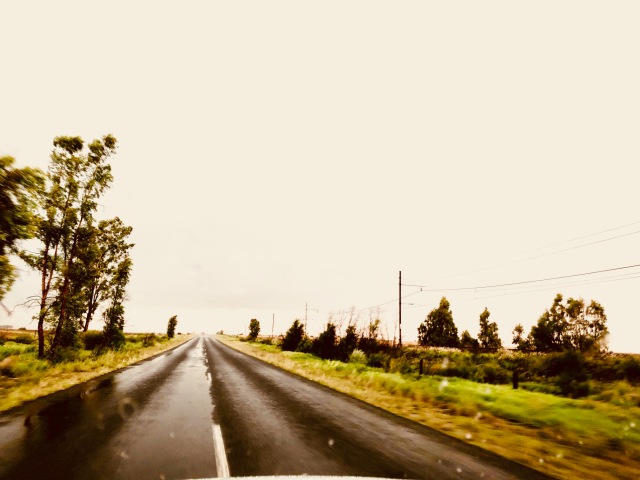