The schedule was reworked on the third day of Lesotho Photo XP and started with breakfast at Mohokare Guest House in Maseru. We shared the meal over some of the written pieces that the participants had done the previous day or work that they had from before the training.

It was an honest exchange about the power of our voices, being creatives and being celebrated. While some participants shared poems they had written the day before, others including Ts’episo Mahooa, shared previously written stories. Ts’episo shared a story that tugged at everyone’s heartstrings, a story which she was courageous enough to share with many other people through a publication called WordPower. We continued to go around the table sharing thoughts, ideas and art.

After the check-in, Prof. Muholi challenged everyone to write assignments that would help each participant own their voices and really produce something out of their experiences. Still encompassing the theme of Gender-Based Violence, some of the topics that participants were asked to write about included Scars: how we get them and heal from them, The Clitoris, and Who am I and What do I want.

Lerato Dumse and Letuka Mamohlakula who had spent the entire morning searching for images in Maseru joined us later. Letuka’s concept was on telling stories about male victims of Gender Based Violence.

Using the concepts that they had come up with on the first day, the rest of the participants took to the field to produce photographs out of their ideas. The facilitators worked with participants in groups according to where each person wanted to shoot. One group, facilitated by Lebogang Mashifane drove to Masianokeng, which is on the outskirts of town. 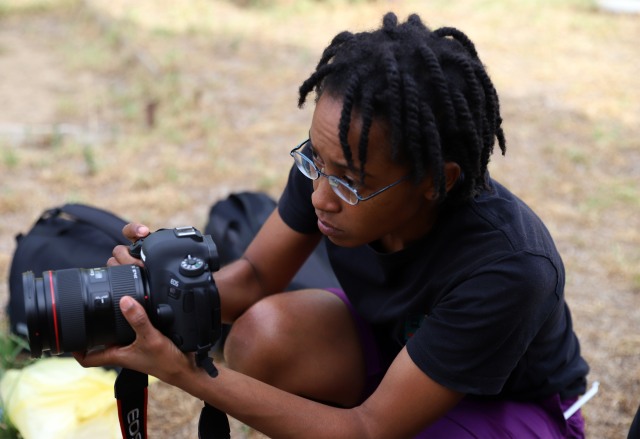 The group featured ‘Matlali Matabane, Ts’eli Motsoane, Tsebo Phakisi and ‘Maleballo Mokhathi, were able to capture some images that spoke to the concepts they had all come up with. They shot in and around a river called Phutiatsana. Each of their ideas showed themes like confinement, healing, violation and others. There was the challenge of time constraints in terms of the light needed to have a good shoot as the sun was setting. Another group went into town with Thobeka “TK” Bhengu where they went to search for faces for Ts’episo’s portraits.

The day ended around 21:00 after everyone’s memory cards were backed up for archives.

A group photo was captured to mark the halfway mark of the photography training week. Image by: Pro. Z Muholi