Ukuba: The journey of becoming, is a collaboration between Thembi Mthembu and Thalente Khomo who are both members of the Amasosha Art Movement.

Thembi Mthembu holds a Bachelor of Technology Photography Degree from the Durban University of Technology (DUT). Thembi’s work speaks about “being still in the midst of turmoil.” She also prefers not to interpret her work but the viewer to interpret it themselves.

Thalente Khomo holds a Diploma in Photography from Durban University of Technology. She is studying further toward acquiring her Bachelor of Technology in Photography Degree also from DUT. Her work speaks about reflections of the past and present but this specific work below is called Umthunzi Wesithunzi Series 1. The black and white signify the past and the blue represents the present. This piece below is about a shadow of shadows, how scary shadows can seem.

Below is the interview with Nomusa Musah Mtshali curator of Ukuba: The Journey.

Wendy: Why were the body of works arranged the way they were?

Musa: For those who haven’t been at the “The Office 97”, the space is small and intimate, which to me meant the works need to tie and link together to tell a solid and bold story. That was not difficult since all the works were already in the exhibition space by the time I had to exhibit them. I aimed at showing the audience two perspectives to one story, in accordance with their message. We paid more attention to colour and style so each work is placed in accordance with and a compliment with the other.

Wendy: As a curator of the Ukuba – The Journey, how did you plan for the exhibition?

Musa: “I have known Thembi Thembu and Thalente Khomo since year end (2018).  In November 2018 we all took part in IsiZukulwane exhibition, which took place at Ikomkhulu Art Space. During the isiZukulwane exhibition, I got introduced to their works and concepts. I found that they both talk about their relationship with the spaces they exist in, what they love about themselves and their surroundings. When I heard about The Office 97, I thought it was a great idea for both of them to collaborate.”We were all out one day, Thembi and Thalente were talking about the exhibition procedures and at this point, they haven’t talked about who would curate, exhibit and how. I only knew a day before the exhibition that I would curate the show. Since I have known their works from November 2018 I knew there will be a cohesive theme, which meant to keep the exhibition in that theme.

Wendy: How many people were at the exhibition?

Musa: The office 97 is trying to integrate a working environment with the arts culture that already is there in Durban and all three of us are members of Amasosha art Movement based in Durban. Most of the audience members are friends and alliances of Amasosha and since The Office 97 is still new we didn’t have much of an audience.

Wendy: What was your target audience?

Musa: I believe art is for everyone who co-exist with it and those who want to invest in it.

My target audience is open-minded people who are acceptable to empathy and the value in one’s story, people who challenge the norm and open to change.

Wendy: Why did you specifically have those performances?

Musa: We had those performances because of their spoken word and the ability to take a person from where they are into another place and they are talking about the journey of being .

Wendy: According to you, did you achieve your objectives and what were they?

Musa: Thalente and I had a talk about how we as human beings we are learning in the school of life. How as a person, you learn and re-learn everyday.

This exhibition to me is a tangible result of that conversation. It shows how important it is to know your story and be able to tell your story without fear; also trust that in this journey of being and becoming you are not alone but with people who understand that “indlela ibuzwa kwabaphambili” and every story deserves to be heard. 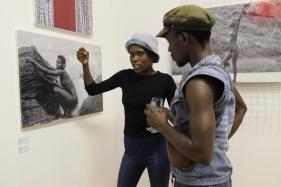 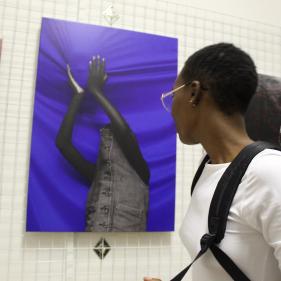 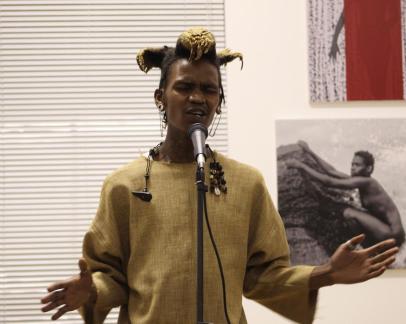 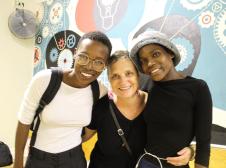 The performances were electrifying, they all came from an honest place. We were serenaded by Zintathu, Lindo, Lisoh and Bright who all performed in isiZulu with background music that set the mood. One of the poems performed was about death (ukufa) and fitted with the order of the day, which was The Journey. I still get goosebumps just from thinking about the performances.

First Thursday Exhibition, which was a collaboration of two young photographers who are taking big strides. This Exhibition was mostly attended by Young African Creatives, Amasosha Art movement and Inkanyiso Media team. The support Thembi and Thalente received from the Durban art community was totally astounding.

Amongst the attendees Osmosis Liza, who is a Lecturer at DUT (Photography Department) and she is also Project Manager of PhotoBooth Collective that Thembi is a part of. Prof Sir Muholi also graced us with their presence and congratulated the young photographers and gave some invaluable advice.