A review by Thobeka Bhengu

Today we visited Gugulethu Primary School where we were supposed to interview the principal and colleagues. However, the principal had to decline to speak on behalf of the school without the consent of the district office. She fully supported our visit and suggested that we return as soon as she gets consent. The principal also arranged interviews with Khuzwayo’s former HOD, two colleagues and a student for Inkanyiso team to interview.

The team interviewed Nonhlanhla Mthimkhulu who has worked at the school for 17 years as a cleaner. Mthimkhulu spoke about the kind of person that Khuzwayo was at the school and still is; she mentioned how loving and caring Mam Khuzwayo was and still is. She recalls how she wasn’t just a teacher but was more than just an educator to the pupils she taught. Mthimkhulu witnessed Khuzwayo go an extra mile for pupils that are being abused or going through hard times at home.

The second interviewee was Mbalenhle Qumba, a Grade Seven pupil who was taught by Khuzwayo in Grade Three. Talking about Khuzwayo as her former teacher, the student became very emotional as she spoke about how there has been a vacant space since she left and how she made them laugh.

The team interviewed another colleague Duma Mkhonza-Khanyile, who started teaching at Gugulethu Primary School in the year 2000. Mrs Khanyile and Mam Khuzwayo were allocated to share a class. Khanyile spoke about learning a lot from Khuzwayo and recalls how when they shared a class she was disciplined and encouraged teachers to always be active and committed in the classroom. She also spoke about how Khuzwayo donated and helped students with buying them uniforms, groceries and worked closely with the social worker. 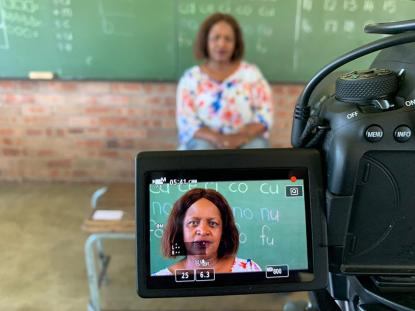 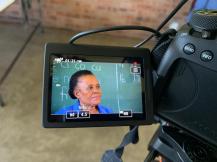 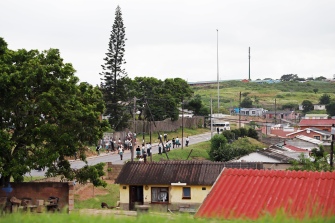 The needs of the school raised by the interviewees were as follows:

All interviewees spoke highly of Mam Khuzwayo’s dedication to her former profession and going an extra mile with students who require extra help. They also spoke about the difficulties facing the school, amongst the common issue of no libraries and little resources. They also spoke about access to taps and sinks around the school and inside the toilets. Having taps and sinks will help with accessing clean water from the tap and hygiene issues. The school also has a huge security issue, with the fence broken down in other parts of the school and also the issue of electricity in the classrooms where cables were stolen.

As we celebrate 25 years of democracy, it is important to reflect and also find ways to empower ourselves and play an active role in the betterment of our schools as we look to address the lack of basic amenities in some of our schools. Partnerships, collaborations, fundraising initiatives, sponsorships and community participation are some of the effective strategies to develop our schools in our disadvantaged communities.