It’s the 4th of April 2019; I woke up feeling excited about attending the concert. We left the house and made our way to Constitution Hill where the concert was held at the Women’s Jail. This is the same place where women in the struggle where jailed, ill-treated, threatened and tortured; yet here we are two decades post democracy, celebrating our Mother Winnie Mandela with a beautiful concert that consists mostly of women. This concert is happening on a Thursday evening, now Thursday is a day in which a lot of women gather for prayer (umthandazo womama) and many others attend ladies nights.

The concert started with a series of images of our late mama Nomzamo Winnie Madikizela Mandela, which were shown on the screens. The images were of uMama in the struggle; police confrontation, her children, Mam Winnie and her then husband Nelson Mandela. These images gave us a clear indication that uMama suffered a lot under the apartheid government and yet she still loved and cared for her children. The images showed us the Power of a woman who makes sacrifices.

Rorisang Thandekiso who was the M.C. for the day spoke about the importance of wearing iduku (head wrap), that as African women iduku is a sign of respect and honour. We were requested to have a moment of silence and in our silence we needed to think about the change we want to make in our communities, country and the world, to think about our impact in society. This really got me thinking about my own contribution to my community and what I could do that will have a positive impact in my community. 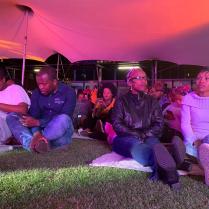 We enjoyed an open mic session that was opened by Zulu Boy, who reminded us that we are Black and we should be proud of who we are. He then sang a song from the struggle that reminded us that our ancestors died for this freedom that we enjoying today. Right after him we heard from a woman called Maritjie who is white but considers herself as a black woman because she resonates. She shared a glimpse of her story and highlighted that her own race didn’t take care of her when she was on the streets but it was the black race that took her in and gave her a sense of belonging. She spoke about doing away with segregation in our spaces and finding a way to work together as women without looking at race.

We enjoyed music from Morena the Squire, he sang a song dedicated to women, mothers and all those who’ve made sacrifices for their families. In this melody he was speaking of all the sacrifices women make daily and saying how he appreciates everything women do. He then made us dance with his dance song saying ngihlanyiswa wuwe (I’m driven crazy by you).

Shortly after his performance Rori announced that Buhlebendalo was about to come on stage, the crowd got really excited and shouted with joy. Buhlebendalo walked in chanting welele welelele carrying a metal cup that reminded me of my grandparents’ home. She then appraised her ancestors as a sign of respect since she is a traditional healer and needs to acknowledge their presence in the space. She sang a song saying lalela abantwana and another that says uNomzamo uwanyisile amabhunu uNomzamo we could just see her ewanyisa amabhunu during the struggle. Her strength and endurance is proof that indeed ubanyisile. She then sang a song that says ‘’Ndingu Nolwazi, Sphokazi, Mandlakazi, Thembakazi” she spoke of how we can speak for ourselves as women, how we can ask if we need help and how we are capable of doing things for ourselves. She then saluted Mam Nomzamo with a song and did a cover from South Africa’s most talented singer, the late Brenda Fassie titled Too late for Mama. With this song she had us all feeling really emotional and remembering how women are killed on a daily basis and how they struggle to fend for their families daily.

Busiswa then came on stage and called on all the queens and saluted them. She proceeded to say “If we can learn anything from the legacy kamam Winnie is that if uyistarring you must be a starring.” She brought the house down chanting she’s alive, she didn’t die, she multiplied, we danced and did the vosho dance with her in celebration that indeed Mam Winnie dint die but she multiplied in us all.

Berita took to the stage singing thandaza mpefumlo wam, siphinde sidibane. The song moved us deeply and sent us to a new trans that made us think about our departure and what would happen to our souls, if we’ll meet on the other side or not.  She did a Neria cover by Oliver Mutukudzi. She moved our spirits, we remembered all the fallen music heroes who didn’t just give us music but gave us soul.

Wanda Baloyi (African cocktail) sang “Ngiyekeleni ngihambe, ngibuyele ekhaya, sengikhathele, ayikho into engiyihlalele lapha. Baba ngthi wee thathi inkomo zakho, uyithathe la oyibeke khona, sengikhathele, ngibuyele ekhaya” This song evoked a lot of emotions from within, thinking that at times when Lobola has been paid a man starts to think he owns you and you are his property. She sang about how we must do away with that culture in not so many words.

The legendary Candy sang xhiloyini wani tsikelela moradzuwa. Impilo ifana nevili, namhlanje yimi kusasa nguwe. She invited Nonidee from Nigeria to join her on stage and sang together. Nonidee sang his new single called fix me. Dj Olwe took to the desk and made us shake what our momma gave us. We danced and laughed as he played. His movements and actions just told you how much he enjoys doing what he is doing. 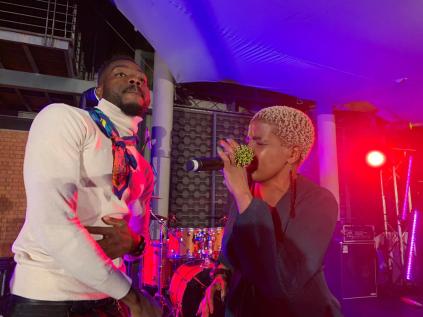 Zoe came in with her soulful, spirit filled sounds. She sang about Mama Winnie and had us all sitting on the floor of Con Hill Women’s Jail. It was right after midnight and we could feel the spirit of mama Nomzamo coming alive through Zoe. Haibo wavuka owesfazane ngengoma. She sang siyolobola ngani iinkomo zobaba zemuka nomoya, she rendered it so well that she had us all singing along. She has soul in her singing. Her song I’m not alone reminded me that I am not alone, but I have angels surrounding me day and night.

This was not just a musical concert but this was the second coming of Mam Winnie. This was her rebirth and she has indeed multiplied in the spirit and souls of young and old women in South African and beyond. Her/Story is the foundation of a new type of women in our times, the type that says we will not look down but we will empower and encourage one another in our different capabilities. Oh our Mother lives, she is alive in us all and we too have the power that she possessed, the power that drove her and directed her to becoming one of the most prominent women in the world.