I was preparing to go to bed when I realized that the SABC1 was broadcasting the feather awards. I decided to stay up and watch. It was very exciting to see the Lesbian, Gay, Bisexual, Transgender, Intersex (LGBTI) community present such a great platform to showcase the immense talent available in our community.

When the awards ended an hour later I felt like I had missed an hour’s sleep and to some extent even embarrassed. I admit that I am not familiar with the feather awards and what they are about, but one or more of the presenters mentioned LGBTI and how the awards are for this community. I was surprised when the awards were presented by and to people who are not members of the LGBTI community. Some of the recipients didn’t even bother coming. Not that I blame them or think they are homophobes. They were probably just as confused as I was as to why they were being honored in an event that has nothing to do with them. It is like hosting women awards and presenting them to men.  We might be a minority group but if they searched they would have found sports people like Chosen FEW a team of outspoken black lesbians soccer players who for many occasions have represented our fellow female footballers abroad and won many trophies. We should that Chosen not only represents but also use football as a ‘right’ to human rights – activism. There are many other out queer artists, activists, and professionals who have dared their lives for the benefits of many who are LGBTI individuals.

The awards failed to provide LGBTI people, from presenting to performing with the space, opportunity and voice to demonstrate the wide variety that exists. In this country we always have the debate of how we value and appreciate outsiders especially in entertainment more than our own. How we prefer and request radio stations to play international music as opposed to our local music.  I wonder if the planners and organizers of these awards followed the same trend in choosing to use “celebrities” instead of less known LGBTI people who would have benefited from the exposure.

There were some parts of the awards that were good and made sense, like the award presented to Beverly Ditsie for her tireless work in fighting for our rights and against discrimination.

The award for most embarrassing performance has to be given to Somizi Mhlongo together with a fellow drag queen, who came on stage unruly and that came across as confusing to me as a viewer at home.  I love Somizi and look upon him as an out spoken gay, talented person and member of our community and most of all a public figure but I don’t think that using vulgar language and insulting people would provide some entertainment as he and his friend did there. They came on stage mean and rude to people and that act might confirm the many stereotypes about our LGBTI brothers and sisters in the community.

The awards have come and gone and hopefully they will improve in future as they posses a lot of potential. This should serve as a lesson especially to us young people that we should seize opportunities given and make the most of them. 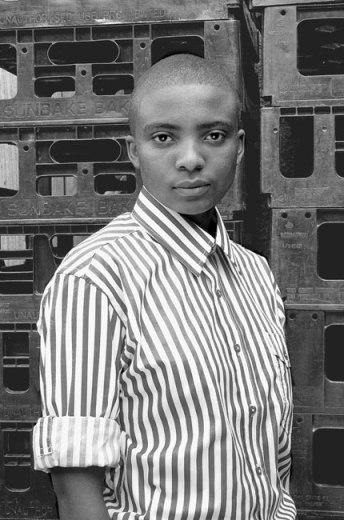 About the author
Lerato is a young journalist, activist who is passionate about documenting LGBTIS lives in KwaThema and surrounding areas.
Lerato studied Journalism at Tshwane University of Technology (TUT).
Also worked as a reporter for Ekurhuleni News; Springs and Brakpan Advertisers.

My name is Lerato meaning love. It was given to me by my mother when and I asked why? She says it’s because she loved me deeply and wanted me to experience love in my life. Its 24years later and I still have a lot of love in my life including intimate love for women, leading to society throwing me in one category and limiting my identity to “Lerato the lesbian”.

I refuse to be defined by people who don’t know where I come from, where I am and where I’m headed. I love helping others, which puts activism top of my love list. Activism which includes but not limited to LGBTI issues, women and children’s issues because my family consists of six women making me a loved daughter, sister and mam’ncane (aunt). I also have an immense love for writing; which motivated me to study journalism as that also provides a good platform for activism. I grew up in very hard socio economic circumstances, but with the Love and blessing of God I have been fortunate enough to be able to study and would like to use this education to help those still faced with those circumstances.

This is me, at 24 years old different from when I was 14 years, and I’m anticipating more change when 34 years, but what will never change is the abundant love in my life, my love for others and wanting to make a positive change.

I am a member of the Soshanguve poetry and book club, love reading and creative writing. I enjoy playing Cricket and Soccer. I also have an interest in filmmaking. I attend LGBTI events and write articles some are published in various websites like black looks, Free Gender, and Gender Dynamix.

Previous articles by Lerato featured in Blacklooks and Freegender sites