Wearing our Sunday best, with bags filled with cameras, recorders, notebooks, tripods and equipment batteries fully charged, we left home ready to work.
The destination was Kyalami Theatre on the Track, where the 5th Annual Feather awards took place on the 14th of November 2013.

The event was scheduled to start at 7pm but many guests took full advantage of African time.
Others were excited strutting on the red carpet to have their photos taken by craving journalists who were pushing each other for the best celebrities’ shot.
That commotion delayed the starting time by more than an hour. South African celebrities and partners, some with friends were dressed elegantly, looking beautiful. Only those with invites were allowed. 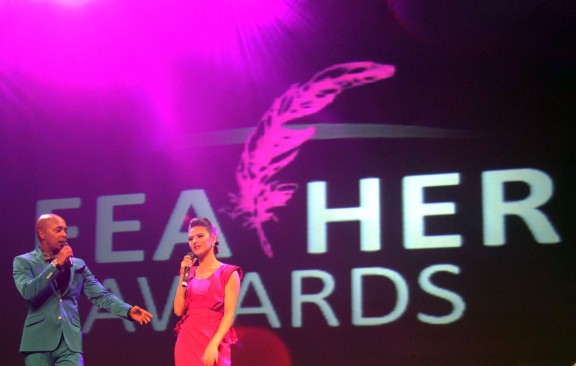 The best hosts of the evening were Lalla and Stoan who kept the audience captivated…
Photos by Nqobile Zungu (14.11.2013)

Vuzu’s Lalla Hiyarama and Stoan Seate were the hosts for the evening and when he walked on stage wearing what looked like a speedo the audience unleashed wild screams of excited female and male voices. The pair reminded everyone that same sex marriage was legalised on this day back in 2006, making South Africa the only African country to recognise same sex marriage and the fifth in the world.

Founder of the awards is 28 year old Thami Kotlolo, born in Mamelodi in Tshwane (Pretoria).

“I started the awards due to my passion and interest in the entertainment industry and a need for more fun and funky awards” said Thami. When asked about the selection process of nominees and winners, he explained that they come up with five names which are given to the judges, mainly journalists who then select the most deserving.
“The recipients are not necessarily gay, it is the gay community giving a pat in the back to individuals who continue to empower the gay community in whichever industry they represent” he explained.
The active youth added that being broadcast on national TV results in the dialogue continuing and people will love the engagement.

The ceremony commenced with a spectacular performance by dance group Vintage Crew.
The awards provided a good dose of witty humour and a few awkward moments, which included presenter Akhumzi Jezile nominated in the Fag hag of the year category walking on stage. Pearl Thusi was announced as the winner instead of him and snatching the award before leaving the stage.

The ever confident Bujy Bikwa reminded everyone that, ‘it gets better’ after collecting his award for Socialite of the year.

Tamara Dey was wearing something that looked suspiciously like it was inspired by Lady Gaga, it hugged her bum or rather the area where her bum should have been. The song was a total flop, luckily the dancers and rapper Reason salvaged the situation. While trio, Kelly Khumalo, Brenda Mntambo and Thembisile Ntaka gave a heart-warming performance of Michael Jackson’s Earth song which got the audience on their feet.
The final performance was by KB Motsilanyane with her hit track ‘Rock Lefatshe.‘

Collecting her award for Diva extraordinaire, Gauteng Premier Nomvula Mokonyane said: “South Africa belongs to everyone who lives in it, including lesbian, gay, bisexual, transgender and intersex (lgbti) people. Being given this award, is a sign of tolerance and a sign of respect for diversity. This token of appreciation is not for Nomvula as an individual, it’s for what I stand for and believe in” the audience erupted in loud applause.

The main award of the evening was Feather of the year which is presented to an individual whose work and actions have uplifted the gay and lesbian community. In receiving the award, photographer/ visual activist Zanele Muholi gave a two minute speech part of which said:
“Girls love girls and boys love boys. There is no need for people to be killed.
Just give us an opportunity to be visible, love each other, marry and not be discriminated against.”

Palesa Kadi, works in the communications and partnership department at the Film and Publications Board (fpb). They, together with Chevrolet sponsored the feather awards.
In an interview with Inkanyiso, Kadi discussed the campaign run by fpb on cyber safety.
“We have seen overtime that there are a lot of cases involving the gay and lesbian community. There’s a lot of vulnerability and sexting in the lesbian and gay community and when people breakup, their pictures are spread. We need spaces where we can find organized communities, if we talk one on one we are not going to make impact, here we are able to pass our message.”
When asked about the criteria for those looking for sponsorship she explained that they partner with people who have proved themselves, “this is our second year with the feathers in their five years of existence.”

Beverly Ditsie was like a child who has overdosed on sweets, her mood was jovial and she couldn’t keep still or contain her excitement.
Speaking in an eager tone she said “I love the feathers, it’s the one time in the year where there’s no politics involved. Almost every lgbti event has some politics involved.
Politics of pride and ‘who owns pride and this is black pride’ and I’m not disputing any of that. Pride went short left and this year it came back to short right, it’s very clear that we have issues and we are not addressing them. This is the one time were we don’t have to have any addressing of issues. We are here, looking fabulous to have a good time.”

Bev as she is affectionately known said receiving an award at the feathers last year was awesome. “I was very excited, nervous and humbled, all at the same time. When you go for so many years without any recognition for the work you’ve done. It becomes normal not to be called for anything. Now I’m seeing all these young people, awesome looking. When I was coming out at 17 years there were no visible lesbians. When we started the organization Glow in 1988 there was only one other black lesbian. Now when I see these young people visible, there’s a thick sense of pride and sometimes I look at them and it’s sad because they don’t know their history and the people who paved a way and laid the ground work.”

When asked what fellow comrade Simon Nkoli would have thought of the awards if he was still alive. She responds with confidence and a broad smile. “Simon was a typical queen, he would be laughing and screaming and calling everybody to say hello, just having a good time.
However, he would be heartbroken at the way things are in our broader LGBTI community.”

When all the formalities were done, people moved from the hall to the reception area where a serve yourself supper was available.
With stomachs full and drinks in hand from the open bar, and a Dj who knew his job.
Faces were full of smiles and people unleashing all sorts of dance moves with help from Johnny, Jameson, Captain Morgan, and many others.