On the 19 April 2013, Inkanyiso.org celebrated 100 blog postings in less than three months of being active. The blog was created on the 4th February 2013, and has items ranged from news articles, creative writings, poems and personal stories from different individuals who have contributed to the blog. 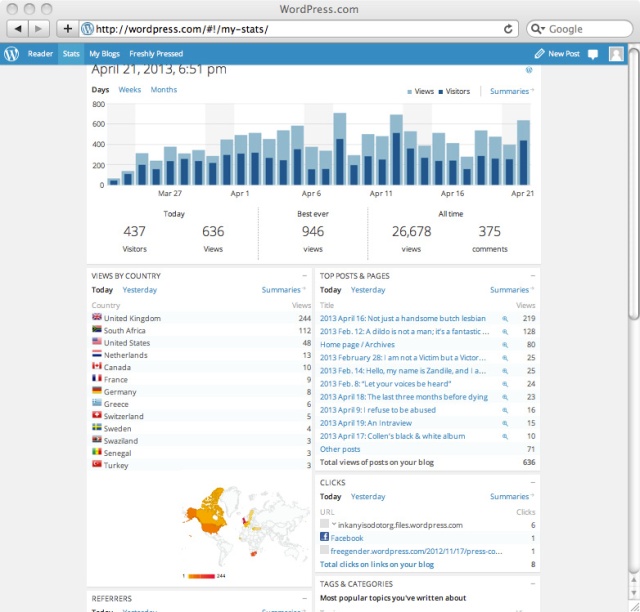 I asked the Inkanyiso crew members about the achievement and this is what they’ve said:

Collen Mfazwe: “from the numbers, it’s clear that there’s a lot of commitment from the members.
It shows that we can achieve more than 300 posts in the next 3 months time if we keep working as hard as possible and we don’t lose focus. I’m hoping the members remain energetic as we carry on this”.

Charmain Carrol: “Personally I feel that it’s a big achievement for us that we have reached a 100 posts in less than 3 months and the fact that we have worked together and we have accomplished this without any funding we have accomplished by just working together and creating a bond and a relationship with the people we have been working with and that’s the most important thing that has caused us to be where we are”.

Kopano Sibeko: “Well, first and foremost it clearly means there’s growth and that is a statement.
It also means that individually we are being recognized. We are working hard to ensure that we creates names for ourselves and our readers especially those who are members of LGBT can identify with what we write about. I’m happy and excited I want to see us progress even more in the next months.

Lesego Tlhwale: “for me as a writer and someone who’s contributed to the blog it is quite a milestone. I mean in less than 3 months we have reached a 104 posts not even a 100 which means we are working hard. The articles that we are writing, receiving and publishing means that people are recognizing what we doing. We’re trustworthy and relevant so for me it is a great achievement and I wish we could do more than a 100 posts.  We should reach a 1000 posts in the next coming months which would be a great thing”.

Maureen Majola: “this achievement means that as Inkanyiso members we tried our best and we have worked so hard.  We did not anticipate 100 posts in 3 months and I’m so happy that we actually reached that before that period which means we are dedicated and we are willing to do this as one.

Nqobile Zungu: “I’m happy, I don’t have a lot to say, I’m happy we are progressing, I don’t know much about blogs but I’m assuming if it’s 100 posts it means its good and it’s a great achievement. So I’m happy”.

Thekwane Mpisholo: “It’s a way forward on tackling things on a different level and angle. People have been writing before, ok. I’m not going to mention names but other organizations have been tackling stuff. They have been doing it by the book, following the norm, the principles of writing. We do follow the same thing but on a different angle so that people stay tuned.  You know reading for some people is a bit boring. We’re trying to make it much more interesting and to have different writers writing their own style. It is very important to note that everybody has their own way of writing, some people were taught how to write . Some people write cause they have to, we write because we love to”.

Zandile Makhubu: ” Hard work and perseverance does payoff I mean that’s all I can say. We have just been working as a collective trying to make it work, doing our thing. Working hard and making sure the word is out there. I think this is a great initiative and it’s giving so many people the platform to speak their voices, speak from the heart not being judged, we are not biased, every story is welcome”.

Zanele Muholi: “Its been such a great period for me to be working with the collective. Inkanyiso has revived the culture of reading. I’m excited that we have reached this far but it’s very important for me to say that we have done this, we have reached a 100 posts and we have reached so many other places which we educated people using visual media – using documentary and film which were previously produced in South Africa over the past 10 years.
It is easier to educate different Lesbian Gay Bisexual Transgender Intersex (LGBTI) communities through visual media especially people who might not have had the chance to watch them at queer film festivals. Previously, we have screened Raped For Who I Am by Lovinsa Kwavuma. It is quite an important documentary though directed and produced in 2005.

We shared the documentary with the communities in Daveyton, KwaThema and Alexandra.  We are planning to showcase many more documentaries that feature our own LGBTI individuals and share it with communities who do not have the privileges of being at film festivals that are hosted annually in places like Johannesburg, Durban and Cape Town. This is a milestone at it best and I’m happy we could do it as a collective”.

Gathering from all the positive perspective of the team members and by judging from the work that has been presented on the blog plus the efforts that has been put forward, Inkanyiso is a growing media organisation and it is going places.

Baitiri is a law student, writer and poet. She is a lover, sister, friend, daughter and life skills co-ordinator. She is also one of Inkanyiso members.