Odidi Mfenyana born in Bo-Kaap, Cape Town, describes himself as a trailblazer, someone who is the physical manifestation of a human bridge between the past, present and the future – a living embodiment of South Africa’s miracle, that is a robust and powerful energy for renewal and transformation.

He calls himself an Arts Practitioner and heads Odid! Arts & Entertainment Solutions, a company he owns.
He is also a performing artist, social activist, social commentator, creative artist, musician, etc.
The undeniable Mfenyana studied at Tertiary: Waterfront Theatre School and the Cape Academy of Dramatic Arts, earning the Trinity College Performer’s Certificate in 1999.
In 2010 he earned a Certificate in Business Acumen for Artists from the University of Cape Town Graduate School for Business.

His energy is unstoppable and his sights are set far.  His future endeavours include studying at Kaospilots in Aarhus, Denmark, helping a new South African political party become a force in South African politics in time for the 2014 National Elections, growing his company to become an important Arts & Entertainment Company that will impact and help transform the syllabus for all Performing Arts at Tertiary Institutions in South Africa.   His overall vision is to change South Africa “into a proud and united nation that masters a fluency in human potential.”

This may sound like an eclectic mix of things for one person but Mfenyana lets you know in good time that he is driven.  In his words he says he wants people to know about “my talent, my stage presence, my ability to draw in an audience and hold them captive – both a gift and a curse, like having the calling of the ancestors to be a sangoma.
Its purity can never be diluted the commune of magic, the hand of God, but its effects are not always welcome or understood, the jealousy, envy and cruelty that can come from those whom it frightens can have really damaging effects on me” he says.  But that awareness does not slow him down, it only spurs him on.  He however had to learn to deal with it after realising it was taking a toll on him and his thoughts taking a dip.
He states “I once had faith in poison and that it could release me of the darkness but now I have come to understand and care for myself and respect my gift profoundly!” 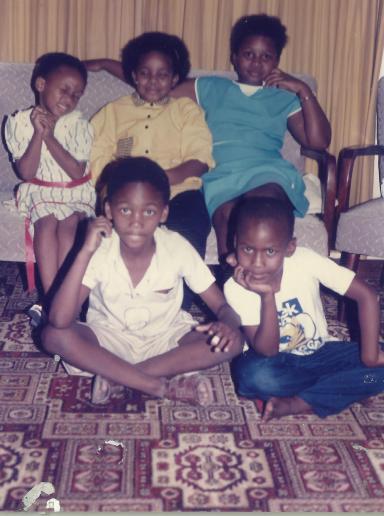 Born into a family that consisted of both his parents and 2 siblings.  He was treated as laatlammetjie (the baby of the family).  He and his now retired parents, whom he lives with, have always gotten on very well.
Because he identifies as a gay man, his siblings seemingly have a problem with it.  He says of the matter “My sister thinks she’s okay but subconsciously it’s apparent in her behaviour and some of the things she says that it does not sit well with her completely.
My brother never quite reconciled with the idea or dealt with it.  Subsequently, we not very close.  My parents accepted me a long time ago, because I pretty much have been the same personality since I was a child.”

He says that is not to say they were not afraid for him though.  His mother once told him that she wept when he came out to her.  Upon inquiring why at a much later time, she said “my son you are already a Black Man in South Africa.
Now why would you want to be Black, African & Gay?”
He thinks back and remembers that “it was internalised for us that white was right.
I grew up knowing that to be white, blonde with blue eyes was the epitome of living the best life.  Looking at it today it is not even true.  Most white people are not even blue eyed blondes.
Sad as it is some African children could not be convinced that white was not always right.”
He says that remnants of those internalization/s still linger in his subconscious especially when trying to find reflections of himself in society at large.
That however does not make him shun diversity –he thrives in it.
He still asks “but really how many times can I find Black Gay Men on Television living my life?”
Everyday my life is an example that you can be successful, well-spoken and fabulous even as a Black Gay African.

Mfenyana who identifies as gay, says he can butch it up if needs be.  As a performer he gets to straddle both sides.  He says of his sexuality and gender identity “sexual orientation is my sexuality which is mostly homosexual but not completely. Gender identity is the difference between Odidi and ODIDIVA. Odidi is a gay man. ODIDIVA is female even if she does have a penis tucked away and fake boobs, her gender identity is female.

He says he lives according to the fabulous RuPaul’s sign off: “IF YOU CAN’T LOVE YOURSELF, HOW THE HELL YOU GONNA LOVE ANYBODY ELSE?,
CAN I GET AN AMEN?”

He also feels that it is important for one to have self-awareness and self-love in order to love another. “I am finally learning to love myself, learning that I don’t need to hide my true self or change and modify it for people to love or like me.  I am learning to value myself, my work, my body and my soul.”

The violence in the county is making everyone take pause.  Mfenyana laments the state of affairs by noting that “what Apartheid did to us IS a crime against our humanity that manifests itself in so many violent ways. Africans from other parts of our continent marvel at our anger and violence. We are a hurt nation and black men especially feel this. It’s scary, it’s painful to see it happening so much in our country.”

He was moved to say something about this shameful culture taking root that he did a Public Service Announcement (PSA) with Jack Lewis, which can be viewed by clicking this link http://www.youtube.com/watch?v=5z-grpZOwRU

He did it because he is afraid it could happen to him, his family and especially female relatives like his sister and brother’s daughters, his nieces.
It is important to understand the past he says, in order to better understand where the future is taking the populace.
“We must not regret the past nor wish to shut the door on it.
We need to see how our collective experience can serve to benefit us in a symbiotic vision of our future.”  He believes the struggle will continue until everyone has the same opportunities and basic human rights.
“We need to belong to a nation where we ARE all BORN EQUAL.”

He currently lives in Plumstead, a former white middle and working class Suburb, where several gays of different walks are visible, no one is bothered about or by that too much.  He says the neighbourhood is a melting pot with many “characters” such that LGBT doesn’t stand out much at the end of the day.

That does not mean he has not seen his fair share of spirit breaking happenings. He is not broken though, only fired up.  “I will tell you that even though life in South Africa is tough, it is still the best place for me. I have travelled to over 16 international cities and stayed and lived in some 10 cities in Europe, Australia and Africa, and I will tell you that South Africa is not easy but it’s better than anywhere else in Africa.
I have a passion for my country, a love that runs deep, my life is lived so that it may continue to rise from the vomit of white supremacy and become the true rainbow nation of God.
If I were a leader of this beautiful country, I would focus on true and comprehensive reconciliation as well as transformation.”

Mfenyana was introduced to Zanele Muholi by Joost Bosland, (Art curator/ Director) who happen to be their friend.
Bosland thought they would really get on and true to form they took to each other. Muholi challenged him to take himself, his life and his work, seriously and he took heed. He had previously been scared to reveal his ambitions beyond the comfort of family and close friends.  Although having partied the previous evening with friends, he made the early morning photo shoot.
In his vivid description while reminiscing, he shares “I looked like a Courtney Love’s African coke whore sister after she’d been sucking cock in the rain all night.
I cleaned myself a bit (plastered the base) and kept my Afro wig on for the shoot.
My body was fit from 2 classes of Muay Thai kickboxing a week, so we shot me topless in heels.”

The rest is history. His poster accompanies his poem THE AFRO IS AFRICAN.
“…the Afro in order to keep growing it needs nourishment,  plaiting, placating but most of all it need uThando, love…”