Four days after the opening of the 2013 Carnegie International. An exhibition at the Carnegie Museum of Art in Pittsburgh, Pennsylvania (USA), which features 35 artists from around the world.

Photo by Raquel Rodriguez of Queer and Brown initiative

Muholi gave a talk on the evening of 8 October 2013, attended by more than 100, mostly local residents who came to hear what the renowned artist had to say. The audience consisted of both young and old, queer and straight. Most encouraging for Muholi was the mixture of different races, a real novelty.

However, it was not by chance or a miracle, it was because of collaborations made with Bekezela Mguni and LA’Tasha Mayes from the organization New voices of Pittsburgh, women of colour for reproductive justice. Together with Human Equity and Art (Heart).

Ayanah Moor, an artist and associate professor at the school of art at Carnegie Mellon University, introduced Muholi and also facilitated the Q&A process.

She said Muholi’s work, “makes visible, the lives of black lesbians and trans man with a dignity and pride that can’t be denied.”

Faces and Phases is the black and white series of black & white portraits featuring black lesbians and some transmen, was also described by Prof. Moor as, “disrupting the violence that aims to silence and control the black queer community. It records and immortalises just as it takes a defiant public stance, including work done by inkanyiso media.”

When she got on the podium Muholi explained the film work is an artistic response against homophobia and ‘curative rapes’ that are ongoing in South Africa.
Including the short documentary film titled: Isililo (Outcry from the nation).
It was produced on the 16th of July 2013, three days after the funeral of Duduzile Zozo, who was brutally murdered in June 2013 in Thokoza township, Ekurhuleni (Johannesburg).

Before it was screened, Muholi gave background into the making of the film and said she was thinking of all the mothers mourning, after losing their homosexual children to hate crimes.

The artivist also spoke about a wish for a space where everyone will join forces and fight hate crimes, even those that are not lesbian, gay, bisexual, transgender and intersex (lgbti). “We are all connected to an lgbti person. Whether through a service one provides, school, work, church” and informed educators that It’s okay to have a queer student.

Then a longer documentary was screened, although it also tackles serious issues, it has a much lighter tone and approach.

It shows Muholi as a hairstylist. 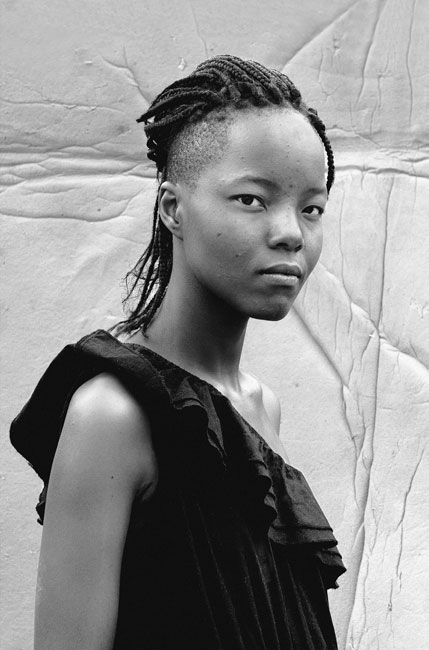 Participant, Tumi Nkopane shares that after shooting her faces and phases portrait, she discovered that she’s actually photogenic and hasn’t stopped taking pictures of herself since.

The more serious issue of hate crime was then tackled, speaking about the children being orphaned by the senseless killing of the parents due to homophobic violence.

The doccie then makes a 360 degree turn and explores issues of intimacy.
As “an intimate being”, Muholi produces intimate pictures. She believes It starts with the same sex love, that is disorganizing the mindset of the homophobe, that leads to lesbians being killed.

“Projecting positivity can sometimes lead to that change, projecting brutality can lead to more violence, we should strike a balance in the way we project these realities,” said the photographer.

One of the questions from the audience was: what can international people do to assist?

To which Muholi replied: how can we collaborate?
For us to kill the notion that Africa needs to saved.
The exchange of skills and knowledge is vital” she concluded.

After the talk, members of the audience shared their thoughts and feelings.

Lerato asking members of the audience questions after the artist talk was over.
Photo by Raquel Rodriguez

Michelle and Winter said word spread around Facebook and they wanted to attend because, “its hard to find something worth experiencing in Pittsburgh.” The concept of Archiving stood out for them. Watching Muholi’s documentary Difficult love a week before, gave them a fresh perspective, instead of the vulgar images usually shown. “You even forget its two women” said Winter, “the love just stands out, because everyone understands the language of love” she said.

While Raydan Surack loved how Muholi talked about everyone being connected and how we can assist one another globally.

Key and Prin-cess: Key works at the museum as a security and couldn’t meet Muholi even though she spotted her at the opening, because they don’t get the one-on-one with the artists, and also has a passion for photography. “I learned a lot today meeting with members of the gay community” said Key.
Who also revealed that until the talk, she had never been to the library, because she stays in one little area and doesn’t travel too far. Key also confessed that she wasn’t aware of the violence and hate crimes happening in SA.
“Even though we don’t experience the violence there are similarities to the struggles faced. On the surface we are accepted as just ‘flamboyant people’. But we are capable of doing anything that heterosexual people do, and we can produce work good enough for the international” said Key proudly.

Tenisha Sengilterry had a mix of emotions. She said “I’m feeling overwhelming love, I’m feeling great sorrow, mournfulness in a hopeful way, a useful kind of mournfulness, where you absolutely want all of the injustices to be ended as in yesterday, through the power of this work.”