Oyama Mbopa is a freelance artist who specialises in acting, dancing, singing as well as stunt performance.  She was born in the Eastern Cape in November of 1981 and grew up with her mother and three siblings.
She is a self-proclaimed lover of arts and sports.
Some of the activities that she enjoys partaking in are; rock climbing, hiking, and athletics.
She is also into reading. 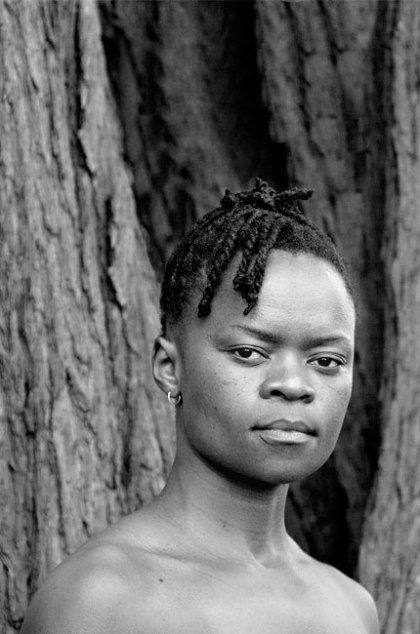 Oyama, who currently lives alone in Cape Town in the Western Province, attended the Durban University of Technology where she earned a National Diploma in Performing Arts, which was perfectly in line with her love for performing arts.

“I am a beautiful young dyke, a woman lover. In between I have my days of wearing skirts even though I look like a cute little boy” says Oyama.
She is currently not in a relationship but she quips “and if I was it would be with a woman.”
She believes that love is a feeling one shares with only one person. She believes in monogamy and safe sex and says “I, as an individual have no problem to same sex love making, as long as both parties have agreed about it and take the necessary precautions.
Her family has no problem and have no judgement against her nor her sexuality.  In her last relationship her family was supportive but her ex partner’s family had a problem of accepting who she was.

Oyama’s future plans are aimed at tackling ills that her community is grappling with.   The violence towards lesbians is in her eyes undermining lesbian relationships.  “We are not safe in our own communities.  People need to be educated that we are not just a bunch of people who are just playing house – but are serious about life and our sexuality, and the fear of the unknown is what kills our people, they are so closed minded”

She would like to eventually run for public office and become a politician where she can create a platform for other young people who come from disadvantaged backgrounds. “Though we might say we are a democratic country, when it comes to the LGBTi rights which are human rights often taken for granted and we need a serious intervention.
Corrective rape is a very big issue in our country.
Lesbians are murdered day in and day out and still the government and our so called Constitution does nothing for the LGBTi community.
I have future plans revolving around homosexuality, same sex marriage, women and children’s rights and rights of transgender people with disabilities.”

On why she decided to work with Muholi, she imparted that “I’ve known Zanele since I was 16yrs old.  She’s one of those out spoken activists that had felt that enough was enough and if someone didn’t take a stand and challenge our country’s Constitution and fight for her human rights.
When she told me about the Photo Project I was looking forward to the 2nd edition because I also felt that my picture would help assist other LGBTi people to know that they are not alone in this struggle.”