I have been in good spirits the whole day I can’t wait to get home, it feels like forever and it feels good I can’t wait to see them. I have not been home since October 2012. See I always made it a point to go home at least once a year, since I moved to Johannesburg from Mpumalanga. When I got sick I had appendicectomy done and then I got worse when it went septic about 4 times. My family was not at all supportive, that was when I stopped going. What they did just broke me. Of course I missed them, but a phone call just seemed enough. I did not seem to be able to get past the hurt.

However they had been reaching to me because they are missing me.  Even my mother, whom I can describe as being stubborn is said to be staring at my pictures. My father such a loving man, but not very expressive when it comes to his feelings, even called to say he loved me. I admit I have missed him the most. My baby sister sent me a picture of herself last December and I hardly recognized her!  She had morphed, her hips and all. In my mind, I thought she would always be 12 forever.

My cousin has been nagging me, asking when was I coming home. I know my parents are going to insist I go see my grandparents.  I did not like going to my grandparents’ house because I don’t like being paraded around.

I cannot say I am looking forward to that visit. Oh yes then there is my brother and his wife both whom I have on my Facebook and by now they know I’m coming and yes I would have preferred if they didn’t because they are just too much. Oh but I miss my nephew, yes the niece too but I don’t know her that much. They bought a house and as the first aunt, I have to go and set foot there. I hope they do not get ‘kidnapped’ by them like last time when I visited. They live in areas that are not accessible to public transport so one has to depend on them for transport, which can be so frustrating because you will be operating on their time

So much has changed though. There are so many people in this taxi who speak Sotho, though I can tell the difference from it to Pedi and Tswana, and I can hold down a conversation. Makes me wonder though what happened to Ndebeles, Xhosas and Swatis?
The taxis are still too expensive for an hour ride at R90.

It had been just two weeks since I had been last home, when I got a message on April 25, 2014, that my grandfather had passed away.

He was not my paternal grandfather, but my mother’s only living brother, making him technically my uncle. but we were very close. On the April 23, during my lessons, one of my grade six girls, Paige was busy asking silly questions and we all ended up laughing, then I told them about my very funny grandfather who gave two of his sons a name that meant the same thing.  One is Phepha and the other is Khasi – which both mean paper. He was an interesting man.

Getting the news couldn’t have come at the worst time ever. I was still angry about something plus I had so much work.  I was with one of the grade 7 girls when I received the call. The girl had upcoming auditions at the National School of the Arts in the room with me when I received the news.

The first thing that came to my mind was denial. My mother sent me messages about four times. She probably was not sure if I had received it. Each time I would look at the messages I would pass out and eventually I broke down and cried.  The student hugged me but she did not know what was going on.   I explained why I had just had a breakdown like that, and assured her I would be fine. It was still early in the morning and I did not want to upset her. I told her that I needed to calm down and did not want to upset her and that she should probably practice during one of her breaks and sent her away.

We called my mother’s uncle Mkhulu Kaiser, loosely translated to mean grandfather Kaiser.
So many memories of him just kept flashing through my mind.  I remember that after my father suffered a stroke he got very depressed, probably from the feeling of helplessness. Mkhulu Kaiser always came to visit with him; this would leave my father jovial for days. Mkhulu was a very funny man.  My dad would always ask him “umkhukhu of umjondolo ukhetha ini?”,
It was funny when he said it in his husky voice. Of course we would point out that they both meant the same thing which is a shack, and we’d chose non.Mkhulu was a very educated man. After getting injured at work he had to stop working while at his peak. He always insisted that we studied hard.

After my grandmother got married, they never did umhlambeso, which is the exchanging of gifts between the two families, so we wanted to do that for my grandfather because everyone else who has been married after that cannot do it until my grandfather has fulfilled his requirements. As the grandchildren, we took it upon ourselves to do this on his behalf.
Mkhulu Kaiser is the last blood relative of my grandmother.
So what now?
I don’t know why I am even thinking about this now. I just wish he could have lived longer.

I eventually called my mother who said, he had passed away around 3am in his home.  During the mourning and burial, I had to appear strong as I had exams coming up.

I called my grandmother, who just broke down and cried, the softness of her voice just breaks my heart. She lost the last member of her family and I felt her hurt and pain. I know how fond of each other they were.

My grandmother calls my father umkhwenyana (son-in-law) or Nkosi.
In my family when a child is born, that child would be sent to her for naming. My grandmother would name the newborn (this is my maternal grandmother as my paternal one passed away long before we were born).
After my birth was I was taken to her and before she could name me, she took a look at me, and then my father said ‘uSebenzile Nkosi’ (which means you have worked Nkosi).
Everyone thought that was the name and they just loved it and do I.

Sebenzile Nkosi was born in 1985 in Witbank, Mpumalanga.
My parents got it all – a son/a lesbian and a daughter, I’m a lesbian.

I am a tenor saxophonist teacher and music arranger. I write to easy the pain, cope and find hope.
I moved to Johannesburg to study music in 2007 my dream was to play for one of the bands in the South African Defense Force. I attended one year at the Funda Community College in Diepkloof, Soweto. With no money to pay for fees, I kept my marks high and became the spokes person of the students there. That awarded me with a scholarship.  I later joined The Johannesburg Youth Orchestra Company that year and trained as a music teacher.
In 2008 I started teaching music to primary school pupils focusing on grades 4-7, while still teaching advance recorder for the Johannesburg Youth Orchestra Company.
I am currently completing my degree in education through University of South Africa (UNISA) focusing on Intersen phase (Grades 4-9).

Intersen phase refers to grades 4-7, whereas Foundation phase are between grades 1-3 and Senior phase is from grade 10-12.

I became section leader of the tenor saxophones in the South African National Youth Orchestra in 2010.

My dream is to have an Orchestra Company of my own that will do more than just teach kids to play instruments. I will motivate them to write their own music. South Africa have initiatives like Idols and SA’s got Talent, there should also be big bands showcasing in those platforms for the youngsters with music instruments to be given an opportunity to play and fully realize their talent.
I would move and inspire education department to employ individuals who are capable of reading music to be the ones teaching at our schools and beyond. 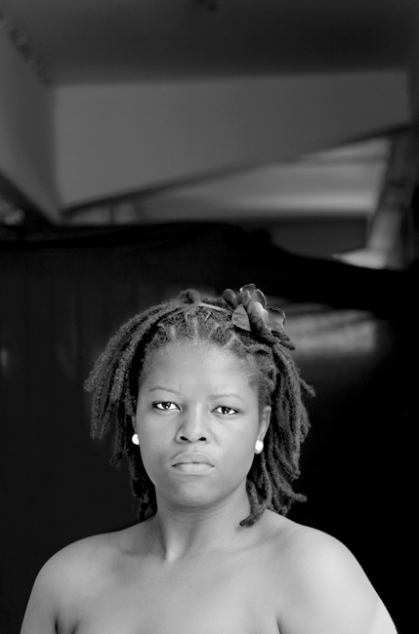 I’m featuring in Faces and Phases portraiture series by Zanele Muholi, my portrait included here was taken in Parktown (2012) at the place I shared with my partner, Sade. She actually introduced me to Muholi.

2013 July 9:  Living in and loving the lesbian boarding house

4 Responses to 2014 April 30: Good spirit dampened by my grandfather’s death