‘The best part was the last act, specifically when there was a war between a man and a woman. The woman had three dogs while the man had one. The man’s dog ended up concurring all three dogs making the man show that he has spirit’, said 15 year old Siyabulela Colephi from Qwaqwa, who came his family to see Full Moon, the dance performance of Vuyani Dance Company (VDC) on Friday the 2nd at the Joburg theatre.

Full Moon is a contemporary piece choreographed by Gregory Vuyani Maqoma with the help of artistic director Luyanda Sidiya and Lulu Mlangeni – first recipient of the Sophie Mgcina Best Emerging Voice Award – as the rehearsal director.
Music is composed by Isaac Molelekoa and played by  The National Youth Orchestra. Costumes are inspired by the synopsis of the whole story and designed by Black Coffee.  Make up for the cast was applied by the House of Queen.

Before the performance starts all I see is the live band, and I wonder if that was what’s in store for night. Then the curtains open, the lights go on and I start seeing dance movements.
The music starts playing, which is visible in the lower stage, it so intense that I got goose bumps.
The next scene on stage I see a man and a woman, dressed in all white and they start dancing. I notice a light from the back of the dancers, the light forms a moon on the rising and eventually ascends.  This process happens again but this time the moon descends.
‘The first act is a bit challenging for me in terms of genre and the putting together of the whole thing. I like how they illustrated the good and the bad and eventually, no matter what happens the good will always come through’ says Charity Mohlamme, a member of the audience.
She went on to say ‎she liked the whole idea behind ‘Full Moon’ because the moon itself cuts through the darkest night and that is exactly what is depicted in the performance. 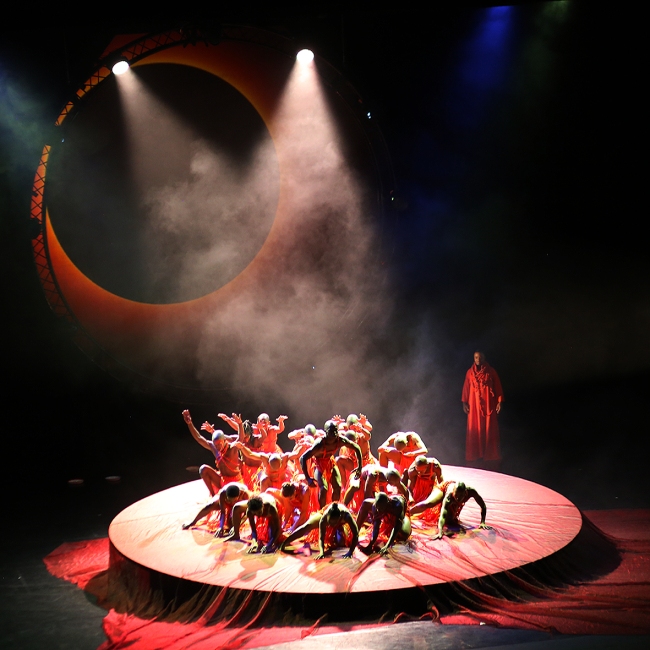 ‘‎It is a great experience, and lovely too. It wasn’t easy but at the end of the day everything came together. We had to research about full moon, purity, rebirth among others, there was also inspiration from Thabo Mbeki’s poem, I am an African, says Phuti Mojela, one of the VDC cast members.
When I asked Lulu Mlangeni how she feels about having achieved this much as South Africa celebrates 20 Years of democracy, she said ‘It is not about proving a point, it is about what you love and making sure that it is being recognised out there, no matter what. Yes it comes with a lot of hard work but you need to push’. She was referring to her love for dance.

The second act is a change of scenery from the first. The costumes changed and the orchestra picked up the tempo.‎ This is where we saw the bad and the evil.
The hour long performance ended with lead dancer Lulu eventually reconciling with all the evil that had happened. She, along with her fellow dancers were celebrating their victory.  At this point I was overwhelmed by the motion and the movement was so healing.

‘In this performance we see how one can go through a period of darkness where they have to face those demons. In so doing, you face your own calling’ says Vuyani, the choreographer of the Full Moon. He went on to say, ‘within our chaos and within our contradictions as a black nation we have the ability to succeed. We can put up works of this magnitude. I hope people will get a sense of possibility from this’.

Smanga is an Alexandra resident and upcoming film director.
Recently completed a project with Global Girl Media.
She is an active member of Inkanyiso’s Black Queer Youth (BQY 5) initiative.