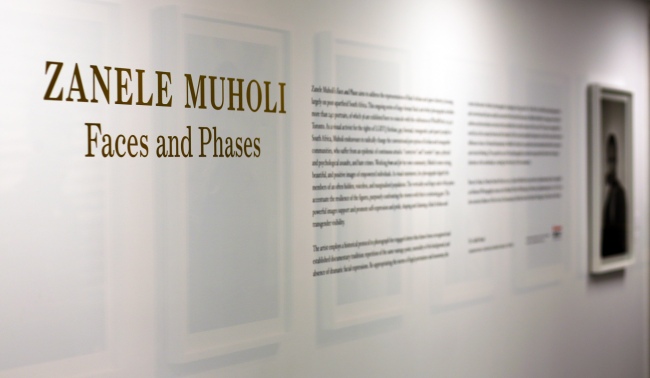 36 of more than 240 black and white portraits that make up Faces and Phases (2006-2014), hung in the Ryerson Image Centre as part of an exhibition meant to coincide with Toronto’s World Pride celebrations.

Zanele Muholi, a Ryerson University documentary media alum turned visual activist, was at hand to give a talk about her work, and this particular project that radically challenges the conventional perception of black lesbians, transgendered peoples and their visibility in South Africa and beyond.

After tinkering and setting up, the ever self-assured but humble Muholi opened up her lecture by acknowledging those that had shaped her academically, spiritually and otherwise.  The room was almost to capacity and it included; the curator, Gaëlle Morelof the show whom she acknowledged for the opportunity to exhibit in that space.  Whilst also challenging the limited number of black lesbians who would follow suit after the 2014 World Pride Toronto brouhaha had died down or indeed those who had exhibited before her.

Politics of visibility are what birthed her entire work and most importantly the F&P project.  While preparing her thesis, she faced a let down upon realizing that even in the Western world, there was still a stark invisibility of African black lesbians in the scholarly world.  She acknowledged Kamplex, one of the participants in F&P series, whom she had shot while in Toronto in 2008.  “I told myself that I am not going to be angry at someone else for not acknowledging my existence.  I told myself that I was going to create my own history and visibility”.

Muholi’s work may sound easy but it is not as black and white.  She explained that to date she has shot over 500 portraits but she commiserates with her work first and has to feel he connection spiritually, for the portrait to make the cut.  During question time, a concerned audience member queried if she was not outing people by showing them internationally.  She explained her work process and ethic stating that she carefully chooses who to work with because she understands the gravity of her subject.

There are three things that she would not do; out someone – because that was not her skeleton, engage with underage lesbians because she did not want to seem to be coercing anyone or for members of the society to assume that she was promoting lesbianism and would not put up anyone’s portrait with no consent form in place.  Soon after she showed a short documentary entitled “We Live in Fear” of how she engages the participants, whom she refuses to call subjects, as well as her process of shooting.

Her talk shifted to the daunting topic of ‘curative’ rapes, detailing how, as much as South Africa decriminalized homosexuality on paper, it was still a raw subject culturally because it is very much a patriarchal institution and one that will not change soon.  She wondered if the men who were committing heinous crimes of rape, murder and disfiguring lesbians were feeling threatened or we were seeing the after effects of apartheid that had left many uneducated and under or unemployed and thus on the prowl.

Another audience member asked why a woman of colour would verbalise the word ‘curative’ rape to which Muholi explained the context of where she came from saying “in South Africa we do not usually use the term ‘a person of colour’ due to our Apartheid past, there are four classes of race –  White, Indian, Coloured and Black. The person of colour expression does not apply there but perhaps the society that we live in shapes how we term these things.”  Always inclusive, she asked another South African activist, Phumi Mtetwa, to speak to that, to which she explained that it was a term used to explain a situation in a place that demands a man be with a woman, that the woman is violated under the guise of ‘curing’ them of lesbianism.

It was a night of uncomfortable truths, but ones that had to be spoken on nonetheless.  With anything, if you must take people on your journey, there will always be turbulence and then a settling down of the flight.

Muholi showed other works that she had produced over a period of time.  While the issue of black lesbians being killed in South African townships was very real and raw.  She also wanted to showcase that there was life on the other side of the spectrum.  She presented photographs from her Of Love and Loss (2013 -2014)series.  It showcases the 2013 first township lesbian wedding in Katlehong as well as a gay wedding that took place in Daveyton township, 2013.
She spoke of the ZaVa series in which, she and her partner, Valerie are co-producing.  They explore their being, they juxtapose their contrasting selves as well as tastefully share their intimacy. 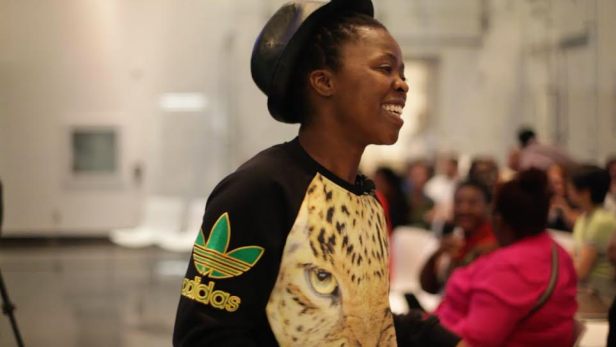 Closing comments with a smile… Photo by Zinnia Naqvi

The talk ended because of time, but the audience was still very much captivated and wanted hear and learn more.  She thanked all those that had made it possible for her to exhibit at this space and reminded them, once again that it was important that they make black lesbians a part of their roster.  I think she was saying that, to move away from tokenism, this space needed to be accessible to all.
She asked “Where do the queer youth from Regent Park go?
Where do the queer youth of Rexdale and Galloway go?” speaking on youths who live in these marginalized communities, who struggling to access such august spaces because they have never been open to them.

Her work is not always welcome and recently an exhibition featuring her work, amongst other artists, called Dak’Art, Dakar Biennale, Senegal – was shut down by authorities.  When asked if she got any support from home, she did not mince her words. “It is lonely where I sit and only this year was I asked to exhibit  at Wits Arts Museum at theWits University.
Sometimes I just want someone to ask me how I am doing”.  Support, according to her, came mostly from the people she worked with in her projects.  She never got any awards from home until she became internationally acclaimed.  Besides winning numerous prestigious prizes, Muholi is also an Honorary Professor at the Bremen University (Arts & Design Dept.) in Germany.

A project dedicated to her late friend, Busi Sigasa (1982 – 2007), Muholi had vowed to not be silenced by anyone.  Even though she lost a lot of her work through a theft of her hard drives in her Cape Town apartment in 2012, she did not slow down and when an elected official called her work porn, she was not daunted either.  Earlier in the night, Muholi had spoken of how she had borrowed her professor’s magazine that had a lesbian on the cover and she had vowed to put a black lesbian on a magazine cover one day.  I would dare to say this Prince Claus laureate is well on her way. 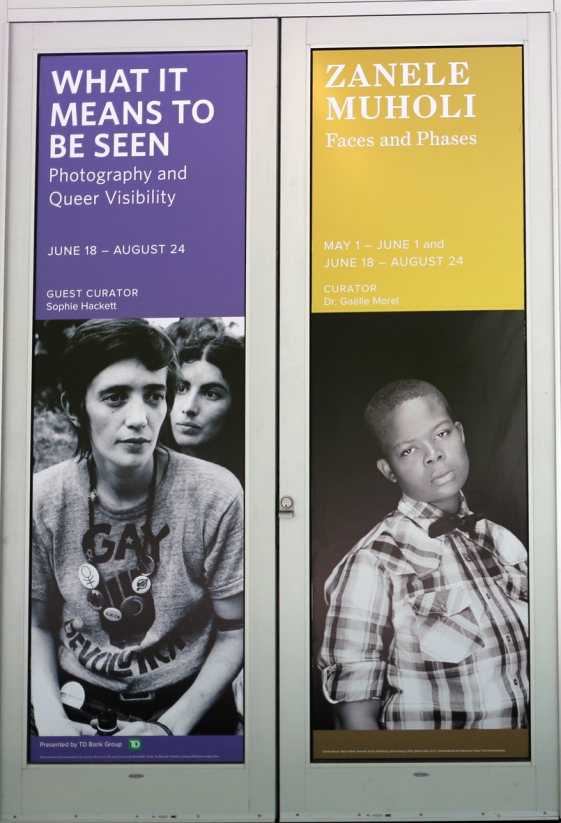 On the 18th of June, 2014 there was an opening reception of Faces and Phases and What It Means to be Seen: Photography and Queer Visibility exhibition.
After the talk the audience was able to mingle with her and get more of her one on one time.  Previously on the 16th of June, 2014 she was interviewed on Canada’s state radio CBC1 as well as on CP24, a popular television news programme, on the 18th of June.  Not forgetting GlobalNews.ca 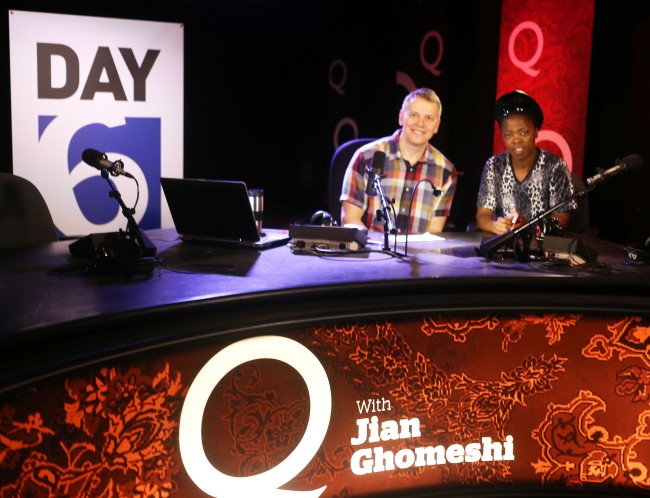 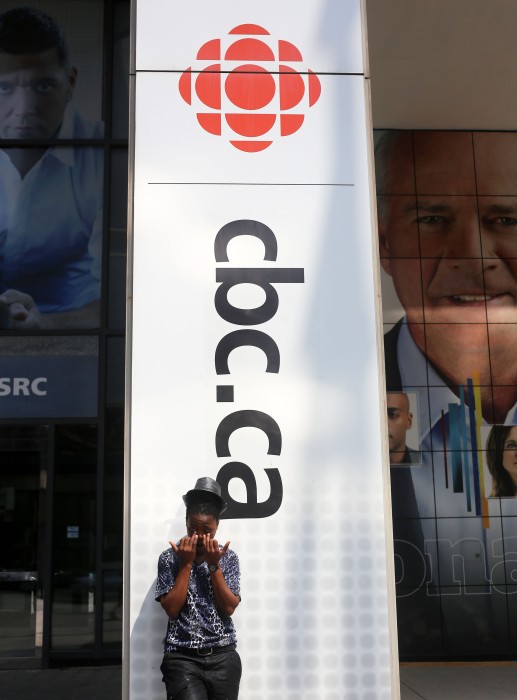 Just as she came, she was gone, for her next exhibition at the Singapore International Festival of Arts O.P.E.N.
(Open. Participate. Enrich. Negotiate), which will be opening on Thursday June 25, 2014.