On Friday, 5th of June 2015  we had our first conference called Yithi Laba, it was one of many more to come in the future which will involve Faces and Phases participants from different fields hosted by Inkanyiso.
The conference took place at Constitution Hill, in Braamfontein Johannesburg. Few Faces and Phases participants were selected to share what they do for a living and also learn from others. On day one we had a Con Hill tour, which used to be a jail during the apartheid era. 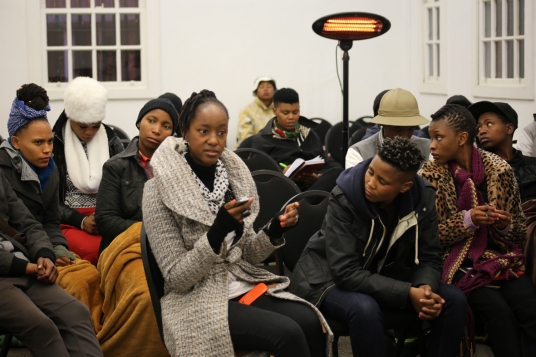 After the tour,“Kea” Refilwe Modise Moloto, who is the founder of Bontle Bame, blessed us with a presentation. It is a project that motivates girls between the ages of 11 to 19 years.
She also told us about her life experiences and left the room with emotion and motivation. Later that day Lebo Mashifane‘s mother Mabifu Mashifane had a few words to say about living with her lesbian daughter. We then returned to Melville, where we were booked at Saffron guesthouse for the duration of the conference. When we got there we had supper, documentary screenings followed by Q&A session.

On Saturday, 6th June 2015 we woke up to very a cold weather, got ready and headed back to Con Hill  where we were joined by guest speakers: Dean Hutton, Fadzai Muparutsa, mothers of lesbians, Mally Simelane, Mabifu Mashifane, Linda Mankazana, Bukelwa Dumse and my mother Mapaseka Mthunzi. They all shared their experience and reactions from society on having lesbian daughters, giving advise on how to tackle some issues we face.

Later that night we had screenings of Terra Dick and Christie van Zyl‘s work, which were very moving and inspiring.
On Sunday, 7th June 2015, which was our last day we all had to present and learn from each other. Although we didn’t have much time, we managed to present. I was excited to present about what I do and got carried away with talking because that is one of my specialties.

I personally think that the conference was a success and I have learnt a lot. I am hoping that all that I have learnt will benefit me in the future. I also made new family and friends, I wish the youth of South Africa would appreciate some of the privileges we have. While were lucky to be invited to the first Yithi Laba conference, another youngster was hungry for knowledge, while another was raped and murdered. We all have to work hard and appreciate what we have.