The 2014 festive season was quite memorable as opposed to 2013 December holidays. Just like the first climax (orgasm), it was quite a revelation – so was my virgin experience. I mean my Durban experience.

Being in Durban for the first time was immensely exciting to my personal exploration. It came with cleansing, clarity and closure. I marveled the sublime lush that brought peace to my soul. The serenity of nature was the most calming sensation; I was breathing fresh oxygen. I was also able to observe personal behaviors from the 9 other people I had travelled with from Johannesburg and spent December 30 – January 5 with, and deduced thereafter as to how to react. My way forward comes with limitations that will benefit my path and journey in this year and beyond.

Zanele Muholi’s family warmth was quite sincere, I felt welcomed and at home. It was lovely to see family members who have also heard of me but have never met me in person, with Nhlakanipho “Nhlaka” being the intermediate. I met Nhlaka Muholi (Zanele’s nephew) in Cape Town when I was still living there, and he lived with Zanele. It was lovely to see him again, he’s like a brother to me the last time I saw him was in 2013 we lost contact when I relocated to Jozi. Closing off the year 2014 with him at his home was remarkable. As much as I have spent time with Zanele, from Cape Town to Jozi, there I was in Durban still learning more about her. Not only from her professional aspect but also from her family background.

Umlazi is the township in Durban that sheltered us for the entire duration of our stay. The unleveled ground portrays its heaped hill landscape where you can see houses that are on other hills, miles away. A slope walk around P Section in Umlazi is accompanied by corn, banana and mango trees. When we entered into the new year, it was a beautiful scenery to watch the fireworks. There are no big buildings obstructing your view and living at the peak of a hill exposed the area vastly. 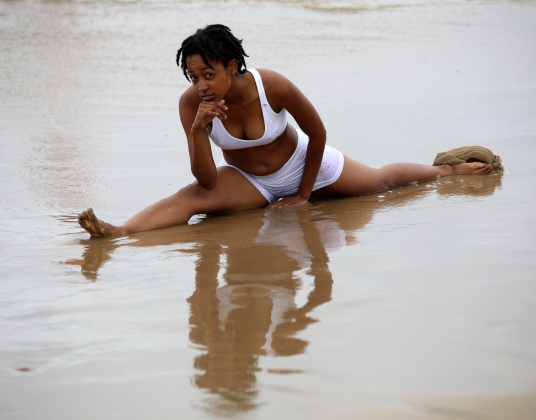 The author at Durban South Beach…

We went to the beach on our first morning in Durban which was the 31st of December 2014. Durban water is warm, unlike what I’m used to in Cape Town. As I was about to enter the water I prepared myself for a cold rush, only to receive a warm welcome. It was quite a satisfactory approach because the weather was chilly. Those who stayed longer in the water got stung by sea creatures known as lue bottles. Fortunately or unfortunately I was never stung by a blue bottle so I don’t know what it’s like. Those who had the experience say it feels like a little cut or a shock sensation.

The beach is a 10 minute walk away from uShaka Marine. We went to check it out. We didn’t have money to access the rides so we just walked around the shopping centre. We got to watch and listen to a Marimba band perform live and we got to play at least one game at the game shop. Each person got 2 tokens from Lerato to self-entertain. It was great to meet Bathini Dambuza and her lovely friends who came to see us. I was looking forward to meeting Xana, I guess that will take place when the time is right.

On the 1st of January we went to the beach again. It was so crowded, as if the entire population of Durban was at the beach. It was as if every person who was in Durban wanted to get rid of all the 2014 tension, a significance of washing away bad luck. The life gaurds notified us of possibilities of unleashed sharks. People refused to get out of the sea water and dared the shark(s) to come. They gathered at quite a depth of the sea and howled “mayize” (let it come). Well Inkanyiso media was there to document. Reporters Lerato Dumse and Sharon “Sicka Star-ban” Mthunzi with myself rolling the camera had the moment captured.

In other words, we went to explore Durban, only to be hindered by a shark. The sea waves were rough and we were summoned out of the water just as we entered.

The following day Lebo Memela invited us to her home in Kwa Mashu (another area in Durban). We had a lovely lunch prepared by such an amazing mother. Lebo’s mother loves and supports queers; she has a gay son and a lesbian daughter. In my perspective, Kwa Mashu is more Kasi (township) whereas Umlazi has a plazi (rural) feel for me. When we were in Kwa Mashu I forgot a tad bit that I was in Durban, for a while it felt as if I was back in a Jozi kasi. Whereas Umlazi made me feel like I was in a different place from what I’m used to and I enjoyed the feeling.

The 3rd of January 2015, Lebo and I went to a shopping mall called Workshop. It has market stalls outside where one can buy crafted items such as beads, sandals, garments, ornaments, etc. The rest of our crew went to Verulam to visit a lesbian couple that is in its 60’s. Lebo and Lebo enjoyed seafood session at one of the restaurants at the beachfront. After the 20 feasting we went to chill with Lebo’s family at the beach and met up with Katiso Kgope and Luyanda Mzimela, our other crewmembers who also didn’t go to Verulam. Luh Cele had invited us to a braai at her home that evening. It was lovely to meet some of Luh’s friends and enjoy good food and music.

The beauties at the beach, Luyanda & Katiso.
Photos by Zanele Muholi (2014)

On our second last day in Durban we went to Victory Ministries Church International (VMCI), which is a gay church in Durban. It was something out of the ordinary for me, from what I know as church. Back home I have to “dress” for church, at Victory I can “drag” for church. I have always felt that church is missing “gay-ness” (happy-ness). The last church service I attended in 2014 (at home) the pastor spoke of how he will never officiate a gay couple’s wedding. The first church service I attended in 2015 was at a gay church, Hallelujah. The pastor also announced a gay couple that is going to get married soon. Then we had the last supper at Musgrave Mall.

Its been 4 days since we have returned safe in Joburg from Durban. It is lovely to be back home to my family, it’s been a year. Hugs and kisses accompanied by words such as “complements of the new season” and “happy new year” has been a daily transaction since I have returned.  It was difficult saying goodbye to the Muholi’s, however the Mashifane’s were there to conciliate.

It was an astounding and settling come-back and welcome-back to see the people I love most. It is peaceful to receive

my lover’s kiss,
my mother’s bliss,
my friends’ art,
my family’s heart,
my home – my hut.

As I reflect on my Durban experience, I realised that I ate a lot of meat. The meat overload has caused a great craving for fruits for me. Yeah Zulu warriors know their way around their meat. I couldn’t say no to their meat because it was really scrumptious and well prepared. Anyway I love food so I indulge and devour.

I felt like a tourist being in Durban, thanks to Fane for driving us around taking us places. It was also interesting to take a taxi when Fane was not available for individual tours. The weather caused a bit of a disappointment for me. I guess I had high expectations of heat and as a result I left my warm clothes in jouburg – smart me. I only had shorts and sleeveless tops. When we got to Durban it was cloudy, chilly and drizzling. Something I didn’t expect. Lesson learned to always carry warm clothes as well, especially in South Africa.

If I was to express my discontent of watching human beings allowing themselves to be engulfed by melancholy then my expression will take one to the left. My response is filled with disappointments, I am appalled by the immature behaviour of adults that are even older than I am. It is quite shameful to watch souls waste away at such an older age. Souls degenerate themselves instead of meditating upon their own wellbeing. It’s a disgrace that we meet to succeed in the same course yet the segregation amongst us introduces animosity. To witness such impetuous disrespect is utterly despicable, especially if it’s coming from the person you respect.

There was unnecessary impudence taking place amongst some of the crew members. Being the pacifist that I am I seldom caused a riot; instead I followed nonsensical orders. It is good to know your place because then you know your limits. I am proud of myself for being able to stand up for my rights and not allow heavy hearts walk all over me. I stood my ground even though I was jaded by how futile was the entire inanity. I could not be intimidated by any inflictions, people need to grow up and realise that to spite a certain someone is to spite on your own face.

I really wish that as lesbians we could stand together at all times. We are already facing homophobia, sexism (from male chauvinists), racism, etc. why do we still have to oppress each other – our own kind? I find it quite dreadful to write about this pessimism that has become a dull reality to such flamboyancy. I hope souls will learn to appreciate themselves and mediate upon self.

Gratitude to the well wishes from my loved ones to enjoy Durban and to really have fun. Those words dwelled and manifested in me through it all. Thank you to all those with good intentions from the crew and from the hosts, your benevolence is well appreciated.

I will forever cherish the tranquillity of Umlazi, the warm sea and the Muholi family’s hospitality.

Like the incision of the umbilical cord, independence and life begins; so is the joy of starting a new year.

Here is a translation of what is above mentioned in isiZulu.