As one of the highlights for the Malmö Foto Biennal 2015, talented South African Artivist Zanele Muholi, will open the 10-day event. Muholi will be exhibiting her award-winning series, Faces and Phases, as well as her menstrual art.

234 black and white portraits of her much loved project, which features black lesbians and transgender individuals is installed at the Vasli Souza gallery. The blood series will make another one of its rare appearances at this biennal, which runs from the 11th to the 20th of September 2015. Other “galleries, museums and outdoor community spaces will host over 40 exhibitions, by more than 50 international artists and photographers.”

Contemporary artists such as Muholi, who use photography to tackle social and political issues, are the special focus for this year. The aim is to, “have a forum to broaden discussions on the role of photography in society, while creating dialogue about activism.”

Doing final touches to the title of the show is Hazuki…

“We Live in Fear” is the title of Muholi’s exhibition, which is detailed in a short documentary with the same title. The documentary was shot in South Africa in 2013, and features the artist, Faces and Phases participants as well as members of her collective Inkanyiso. The documentary will be projected at the gallery, accompanied by text inscribed on a cloth, detailing testimonies of victims and family members of victims of hate crimes, and other forms of prejudice directed at the LGBT community. 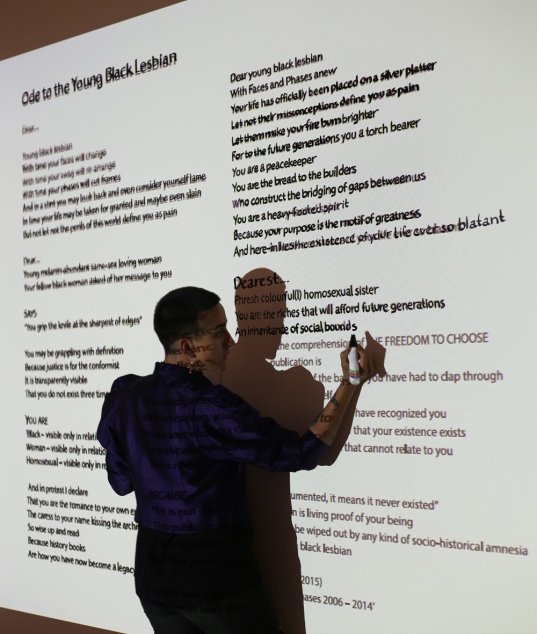 Vladica inscribing Ode to the Young Black Lesbian by Christie

On Sunday (September 13), Panora cinema will host a seminar, another one of the Biennal’s highlights. It will be a full day event with artist talks and a round table on activism, visual art and photography. Muholi will share the stage with moderator/curator Pontus Kyander (Sweden) and artist, Kent Klich (Sweden).

Muholi’s work is currently part of a group exhibition by Deutsche Börse Photography Prize, at the Museum of Modern Art, Frankfurt (20 June – 20 September). As well as a solo exhibition titled, Isibonelo/Evidence, Brooklyn Museum (1 May to 1 November 2015). 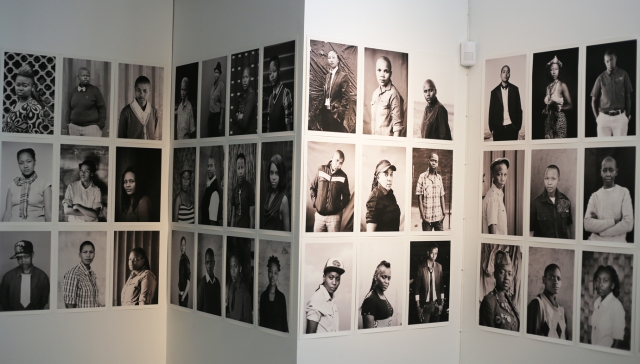