Between signing books and figuring out the Johannesburg vs Pietermaritzburg (PMB) versions of IsiZulu, Faces and Phases (F&P) participants and attendants caught on like a house on fire during the latest F&P book launch. This is despite the fact that some people were meeting for the first time, while others are old friends who reconnected at the PMB Gay and Lesbian Network Centre on Freedom Day (April 27 2016) for an intimate launch of Zanele Muholi’s Faces and Phases 2006-14 photo book. Freedom Day in 2016 marked 22 years since South Africa (SA) became a democratic country, with black citizens able to cast their ballots for the first time.

Londeka Xulu who works at the centre was instrumental in making the launch happen, as she was the primary contact who organised the event and informed participants of the event. Rotating people’s books between the eight participants made for an interesting exercise, as books kept getting mixed up. It was also interesting to note the dominating presence of feminine identifying lesbians featuring in this award winning series of black and white portraits showcasing black lesbians and transgender individuals from different African countries.

The femmes had a bonding session while going through their books and picking out their favourite eye candies. Muholi opened the reflection session by giving background on the Faces and Phases project and the late Busi Sigasa, who is the first participant and to whom the series is dedicated.  She also reminisced about the period when she documented in PMB mostly in 2010, when SA hosted the soccer world cup. “Sunday Mdlankomo’s image wearing a striped jacket and cap has since become one of the iconic images of our time,” declared Muholi. The photographer acknowledged South African laws when it comes to LGBTI rights, make it possible for artists and activists to produce work such as Faces and Phases. 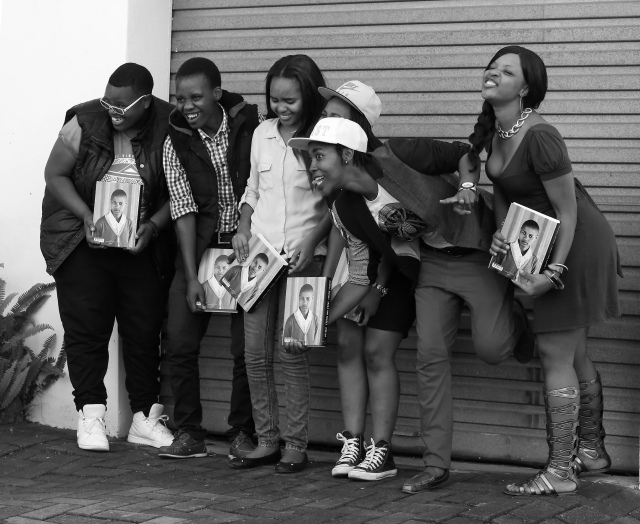 Participants showing off their books. Photo by Lerato Dumse (2016)

“This picture shows the beginning of the journey,” are the words of, Londeka Xulu who said her F&P portrait is a reflection of “another part of someone’s life.” Avoiding identifying herself as an activist, Londeka said she is “a passion pusher who likes to see the results of what I do.”
Fiona Young, one of the event’s attendants who conducted the Q&A session asked whether “people feel like they have made history or they gave someone the ability to make history,” Cassandra Dlamini volunteered to answer the question. “Me specifically I have made history, said Cassandra. “I was part of the gay and lesbian network, a drama group which really made history and went to places,” she continued. Dlamini shared about going to Johannesburg and further making history by becoming a feminist after she studied political education on feminism, allowing her to confidently fight for women’s rights.

Phila Mbanjwa remembered how excited she was when she paged through the first Faces and Phases publication, just before becoming a participant herself. “After seeing our picture on the Queer African Reader, that is when I realised this is ground-breaking.” Mbanjwa admits that when she reads the book and sees what she wrote and promised herself, it helps her to map her path, personal journey and allows her to stick to the goals she set for herself. Shirley Ndaba said she was still young when she met Muholi through an ex girlfriend. Shirley was asked what she would say about the book, to a black lesbian child in 2022. “This book represents a child who is free to be who they want to be, at times as a young lesbian society breaks you, Christianity breaks you, so you never know what is right and wrong. Eventually you are able to find yourself, despite the struggles,” Shirley expressed herself.

Before the intimate gathering ended, Cassandra proposed for an event with all the participants of the book present. Fellow participants, who are determined not to let the absence of a budget deter them from visualizing that day, welcomed her suggestion. The group challenged themselves to investigate what funding opportunities might be available to make the event possible. With the discussion session complete, it was time to take a group photo, to mark the moment. However what was supposed to be one self-timed group shot, turned into a full photo session, including the countless selfies captured by participants.

Freedom day was ended by a meal accompanied by laughter, tackling the topic of sex in lesbian relationships and reminiscent stories by some of the old friends.

Having started the day before sunrise rushing to the airport, Shirley, Muholi and I were exhausted when we arrived back at the Studo B&B, where we were booked for the next three nights. By the second day we were still in awe by what PMB has to offer, namely Ubuntu, safety, hospitality and friendliness, at cheaper prices, compared to major cities such as Johannesburg, Cape Town and Durban.

Follow up Faces and Phases shoots were set up for the remainder of our time in PMB and we invested much of our energy to making sure it happens.