The first Lesotho Photo XP in Maseru commenced on 2019 January 28. The facilitation team arrived in two small groups. On the first day Lebo Mashifane, Tambu Muzenda and Lerato Dumse representing Inkanyiso.Org met the group for the first time. The proceedings of the day included ceremonial introductions between facilitators, participants and our hosts Lineo Segoete and Zachary Rosen from Ba re e ne re a literacy organization. The hosts met with facilitators at the guest house where we were staying for the duration of the training and made their way to Ouh Lala where sessions will be conducted.

Before engaging with the participants, there was a brief meeting with facilitators and hosts. They discussed logistics as planned by Ba re e ne e re supported by Alliance Francé. They also discussed the schedule and program for the week ahead. 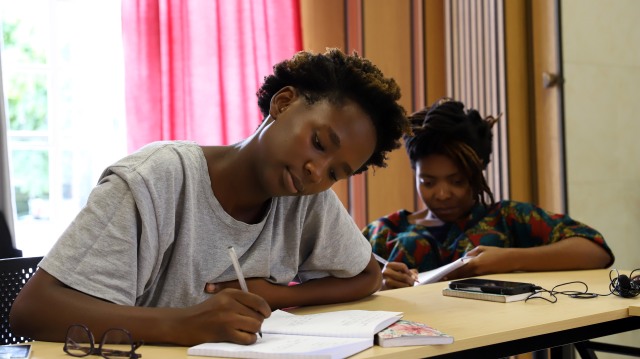 The participants wasted no time and started collecting and sharing their thoughts on the chosen theme. Image by: Lebogang Mashifane

With technicalities sorted, facilitators finally met with the dynamic and eager team of young Basotho women. The group consists of creatives who are already doing work around their communities ranging from research, volunteering, journalism with the majority being academics, writers and poets.

With introductions complete, everyone wrote their names on the board and received notepads and cameras to be used throughout the experience. Tambu was handling the program and gave the participants a few questions to answer. The questions were focused on self-appreciation, the community (including the creative community in Maseru), ideas around success and navigating through violent spaces. Tambu eased the group into the discussion around the theme of this particular experience which is Gender-Based Violence and how GBV can be articulated through visuals. The session for the day was rooted in understanding the group and understanding the views of participants on issues relating to their country, their communities and an introduction of the Photo Experience to the participants in Lesotho, Maseru.

Day one was short and sweet and ended with a group photo. Image by: Lebogang Mashifane