Lunga Maphumulo, treasurer of Kwenza Malembe spoke to us in April about the protest action happening at the City Hall in Durban CBD. Mr. Maphumulo informed us that officials are failing to implement decisions by political deployees from their structure. Budgets are being passed, but officials in power aren’t starting projects. These projects, dating back to 2014 and 2016 have approved budgets; however, relevant persons in power haven’t signed the necessary documentation.

Mr. Maphumulo expressed further disappointment with the government as they have been promising houses for the masses but haven’t delivered. He further stressed that officials employed by the municipality should take action, as the empty promises are leading people to lose faith and distance themselves due the governments’ poor performance, in terms of being efficient with service delivery. 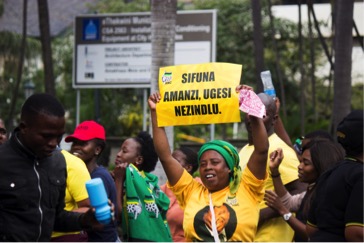 The majority of the gatherers, which were ANC supporters, say they are not against the political party, however they are urging officials to be more active and show results when service delivery is concerned, and stop delaying approved projects. Incompetence leads to the collapse of structures, which delays tasks to be completed they alleged.

In another incident at the City Hall, there was a group of gatherers that had their own complaints. Phumlile, from Chatsworth– a town that is about 24km away from Durban City Hall, claims that seven companies were brought to the township that employed them to do a contractual job, however they haven’t been paid for the past three months. Phumlile, and other employees say they have been trying to contact one of the leaders but to no luck, hence they have decided to come to his office that is a walking distance away from the City Hall. The group claimed to have waited to see him for more than four hours or get an appointment at the least. Their request is for the company to pay them for the job completed.

Its saddening that these employees worked and completed their job as expected, however when it comes to the time for them to get paid, they are given the run around.