For some weird reason I am not overwhelmed, it feels so normal, like I have done this before, very weird for a first time experience, the last time I attended pride abroad was in 2014 in Belgium.

One thing for sure is that I am excited that with this trip everything is just going so well.

What’s more interesting is that this is a decision that was made yesterday (Wednesday 26/06/19) after I received my USA visa, which has been a mission for me to get, not that I have failed the Visa, application, I just never made it to the embassy.

Halfway through the trip, the excitement kicks in, I am going to New York!
I start thinking of all the possibilities and things I am going to get up to there.
I am dying inside to research about World Pride, sadly, with SAA there is no internet connection on their flights. This means I will only have to finish the 14 hour flight then can access the internet and start research.
I keep checking the flight map to see how long we have travelled and how long is it still going to take us to get to our final destination.  Thank goodness I was not connecting, it was straight flight from S.A to New York. Finally, at some point I fall asleep for a few hours. When I wake up, I played some local music Zonke, Shekina, Kwesta, Thabsie,and fell involve with Berita which I played on repeat until arrival in New York.
Have you ever been at a place for the first time and feel like you have been there so many times? That exactly how I felt. On arrival I reconnected with Ras Silas, we were on a same flight and he was travelling to New York for his residency. Ras Silas is an artist I met at the Winnie Mandela concert at Constitution Hill and fell in love with his work.
I introduced him to Metro FM breakfast show with DJ Fresh and he got the opportunity to sketch Lindiwe Mazibuko like during her interview on Famous Fridays, I was proud.

View from Williamsburg by Lerato Dumse

On arrival we went to customs and went to get the yellow cab to take me to Brooklyn where I was gonna be staying with Lerato Dumseand Terra Dick. Lerato and Terra were already there as we all travelled differently. I forgot to tell Lerato or Terra that I have arrived and they should expect me so they can open the door when I arrive. I arrived at the accommodation, there is no WiFi  downstairs so I cannot communicate with them to open for me. Yes I knew the address but I did not have the room number. Believe it or not, I guessed the apartment number of where we were staying, I got it right for some reason, thanks God it was correct and I found Lerato who then opened for me. Immediately when she told me I must come to the fourth floor, I said a little prayer that I hope there is a lift. I was so devastated to find out there was no lift and the staircases are very long, mind you my luggage was so heavy!
Managed to get to the apartment and reconnected with Lerato. The apartment we were staying in was so, so nice with a massive couch which I abandoned my room for and slept on until we left for Seattle.
A few hours later after refreshing we took a walk with Lerato to go see Muholi where they were staying which was a 15/20m min walk. It felt so good to be with everyone there, as always, Muholi fed me a lot of food. Reconnected with everyone and planned our weekend and headed to Brooklyn downtown to do some shopping for pride.
As part of supporting pride, in the US and other countries abroad most retail shops, brands and companies have something that speaks of pride, be it having a flag at their establishment, branding their venues and brands usually have special collection dedicated to pride. We went to H&M first which I was not really keen on, and I found a few items that I liked, one of them is a body suit with rainbow colours that I ended up wearing at pride on Sunday. We also went to retail shops where ADIDAS, Michael Kors, Dr Martin and many other brands had very interesting pride collection and shopped a few items.
I had never used a dollar before, understandably so. The shock of my life when I found out how much I was paying for everything, my heart at first sank. Imagine paying $32 for transport valid for a week, which is a bus and subway train.
Many other things got me worried, this is after I paid $55 from the airport to the apartment. I realised the cost of living in New York is really expensive.
Food, a place to stay, transport  and hot beverages are really expensive.
Come Saturday we went to the 10th edition of Harlem Pride which is an alternative  pride event that happens day before New York Pride march. It was nice and intimate and happened on a street, with the stage situated under the bridge. We had so much fun, reconnected with Lady Phyll who is a co-founder of UK Black Pride and have fell in-love with since 2018 when she attended Muholi’s major exhibition “Homecoming” at Durban Art gallery. I also got to meet Dominique Jackson from the popular series on FX Now and NETFLIX, POSE, who is my older sister from abroad as many who watches series would say.

Yaya in Harlem by Zanele Muholi

Yaya in Harlem by Zanele Muholi
I’ve never seen what people are talking about but it is said on the show she is a version of Yaya Mavundla, all we can do is admire an accept the compliments. The rain had to spoil the day and we left, went back home to freshen up and go dance!
Though I was warned that I should always carry my ID with me if I want to go to a club or go to a bottle store, I didn’t take it serious, got to a club and was denied access, even though I had an electronic copy on my phone they refused. After we got in with Morgan Mohape, we got drinks, which a cider cost me $10 and trust me when I say it was not worth it. We stayed for just one drink and decide to leave, the space was so boring and there were no black people. We were the only ones. It was boring. 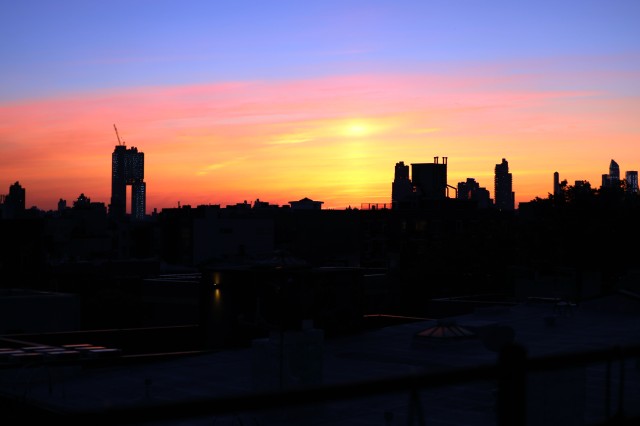 We decided to leave and try another venue, thanks God for the 24 hour transport system in New York, we took a metro bus and went to another place that was suggested by our contact in New York. Immediately when we got in, we felt like we are at home, and we were not asked to produce our IDs. The club was a vibe and we had so much fun.
The music was the one, had a few drinks and so we are fresh for the big day, we went back home to sleep.
The World Pride 2019 Stonewall 50 takeover! At around 14h00 on Sunday the 30th we left the apartment with Lerato Dumse, everyone else had left already. We took a train to the venue, and immediately when we got the train, we met so many queer people and friends/supporters going to the march too. Our first stop was at Madison Garden Park and asked security which was was the march heading to. My pride outfit caused a stare, imagine isicholo (A Zulu hat for women) with a rainbow body suit. Those who are familiar with it would greet me in IsiZulu.
We took a lot of pictures with those who admired my outfit, it was something so unique that one wouldn’t really expect at pride.
Well, they say, once a Queen, always a Queen regardless of where you are in the world.
I knew there was no way I would walk such a long route, so I got myself into the BUD LIGHT float and was one of the girls to lead the float, that was much fun!
With an estimation of about 5 million people who attended, I can safely say that was indeed a successful pride ever, rightfully so, it was World Pride. Those are the memories I will keep forever and I do hope one day South Africa will have such major and successful pride event, but it all starts with unity.
After we all reached the finishing line, people were exhausted, I lied to myself that I will go dance,I couldn’t. I was so exhausted, after I got home I had a few drinks and fell asleep. I missed out on all the thousand massive partied that took place around the city. Which I do not really feel otherwise about.
My wishes to meet up with Thami “Dish” Kotholo who was also there were unsuccessful, a very sad moment, its always great to connect with people from home in a different country. To console myself, I went back to reality that chances of meeting were slim as there was just so much happening in between, worse at pride there were zero chanced to meet unless there were prior arrangements of where would be the mutual meet up spot and time. It was fulfilling though to see through pictures that Thami was able to attend pride with Makho Ndlovu and Phedra Fifi. Sithi VIVA LGBTI VIVA!

A few days before we left for Seattle, Washington, we did some last minute shopping and met up with our beloved Christina Mavuma who is based in New York, she came and fetched us with Lerato Dumse to her place in Staten Island.
We did some shopping, we slept over and the following day she took us back home and got to experience the ferry which was a beautiful experience and you get to see the famous Statue Of Liberty. Later on went to Times Square to meet up with Muholi and Dr. Bajabulile Dhlamini, just like you see in the movies, it as hectic, akulalwa.
I got home in the early hours of the morning, around 2am, had to pack and we had an early flight to Seattle. For me, packing is always a nightmare. I managed to finish and got an hour sleep. Got up and was ready to hit the airport and my morning was spoiled, felt so disrespected and made to feel so small by one of the team member, which reminded me why I am never really keen to travel with people, I really am one for peace.
Nonetheless I carried on with life and to date it has been like nothing ever happened, one of those experiences I rather not chat about.
Story of our lives, a group of six we missed our flight because of racism in America. Yes we had too many bags, which one of my luggage was 2 pounds overweight and had to re-arrange but the treatment we received at JFK International airpot by the officials and staff members at jetBlue airline was uncalled for. Luckily there was another flight traveling to Seattle at 17h30 but that meant we had to wait at the airport for 9 hours for the next flight.
Between me and you, don’t believe everything you read and see on TV about New York, they have many flaws too just like any other countries, but it is a beautiful country to live in. If you never been there, try it, but you need to get your visa approved first.