The long awaited theatre play I Stand Corrected that has been said to showcase the corrective rape pandemic in South Africa opened at the Soweto Theatre on the 28 of March 2013, a day that commemorates the death of Nokuthula Radebe.

Radebe’s body was found in an abandoned building in Everest Tokoza, Ekurhuleni two years ago on the 28 March 2011 with her pants down and her face covered with a plastic and had been strangled with her shoelaces on the neck, again another brutal killing of a young lesbian woman.

For the LGBTI community, the day was very significant as it reminded some of us of the brutality that black lesbians in the townships go through for being openly gay.

It was quite disappointed that the performers did not mention anything about the death of Radebe, even though they indicated in their pamphlets that they had some interaction with Forum for the Empowerment of Women (FEW). I would assume that FEW might have mentioned something to them about the importance of the day in relation to LGBTI history as they are the organisation that has been monitoring the case of Radebe and they even had a commemoration event the day before the opening of I Stand Corrected.

Maureen Majola, a member of Inkanyiso, had to stand up and remind everyone who attended the opening about the significance of the 28th of March and enlightened those who did not know what happened. 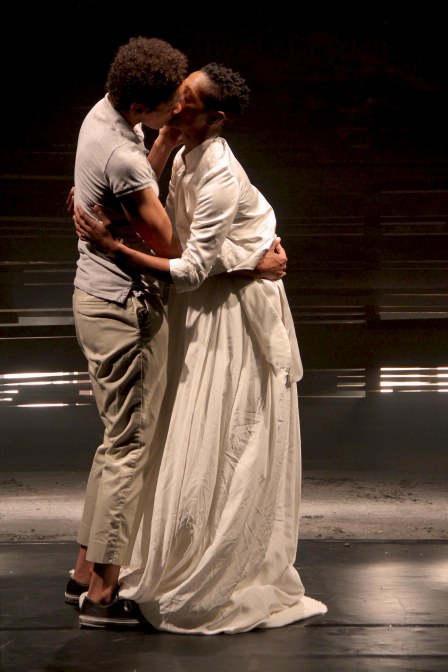 The two talented artists came together to put a piece that addresses social-ills experienced by black lesbians in South Africa. Also, because of the artistic talent and the thought provoking script, the play has since been nominated for five awards in London only, “I don’t know how many awards they won from those nominations”, said Remo Chipatiso, Head of Projects and Partnerships Team at British Council, Johannesburg.

Mamela Nyamza explained that, “the story was inspired by a host of challenges informed by extreme prejudices and discrimination daily faced by the LGBTI community both in Africa and in the Diaspora (Black people living outside Africa), and the hope and triumphs of this community in the midst of these extreme challenges”.

Nyamza further said that, “in South Africa, we have a glorious Constitution that protects everyone, including people with different sexual orientation; however, we have seen so much hate crimes in the Black Townships and In England, for instance; the politicians are still debating to legalise gay marriage, as it is still not legal. Therefore, as artists, we are trying to recall the power of ART to CHANGE social ills, just like during APARTHEID the best way to speak about the challenges the country faced then was through ART”.

The kind of activism used by these artists was very unique and I felt that as LGBTI activists in South Africa we can learn a thing or two from it. Such initiative moves away from the traditional activism we are used too; such as marching the streets and hoping to be heard by the communities we live in.
Nyamza said that, “there are so many ways to do advocacy for a good cause and there are different kinds of activists who have the same goal of changing the world for the better”.

She elaborated her statement above by saying that, “academics do their activism through writing books, holding academic workshops, and attending topical and progressive conferences. Then, there are performing artists (theatre, dance, movies, etc.), who uses their trade of tools to advocate for a good cause.  Then there are photographers who will have to trot all over the show to get that perfect picture to convey his/her message”.

The Soweto theatre during the course of the I stand corrected play also hosted an exhibition by Zanele Muholi called MO(U)RNING. The exhibition was recently featured at the Walker Street Gallery & Art Centre in Australia.

British Council in partnership with Arts Cape funded Mojisola Adeboyo to bring her script to life.

In a statement British Council said that, “I stand corrected was supported, not only for its artistic excellence, but its relevance to human rights, South Africa and it’s direct link to our diversity policy and commitment”.

Productions such as I stand corrected are a must in South Africa and I have no doubt in my mind that we have talented artists with a wealth of knowledge who can create theatre plays, films and documentary about LGBTI issues. However, the lack of funding from our own country and less interest shown by the Department of Art and Culture to support initiatives that address social issues, seem to be the biggest challenge and a setback for our artists.

Nyamza mentioned in our interview that she struggles as a South African artist to get funding for her work here at home, and that she survives on international funding.

I think many artists and NGO’s in South Africa would attest to Nyamza’s statement as they might be going through the same thing.

One example of an NGO that is struggling with funding is Out In Africa (OIA) an organisation that showcases queer films and documentaries came out publicly and said that without funding, the Annual South African Gay & Lesbian Film Festival they host runs a threat of coming to an end.

The organisation that is now surviving through donations and the my MySchool MyVillage MyPlanet fundraising initiative by Woolworths wrote on their website that, “Asinamali (we don’t have cash) OIA’s in trouble (this may be the last Fest for a while), the country’s in trouble, Police and thieves in the street, scaring the nation with their guns and ammunition (Lee Scratch Perry), the abuse of women, the targeting of black lesbians, what is the government doing with our tax money? NGOs, that do their work, are foundering for lack of funding. So, who’s going to fix it? We must. Get up, stand up, stand up for your rights (Bob Marley)”.

Like OIA said, I think it’s time LGBTI Organisations stand up and take ownership, fundraise for their selves and stop waiting on funding that is non-existence.  While they sit around waiting for that funding, our black lesbian sisters are being raped and murdered because our grief is not heard by the outside society.

2013 March 24: Recognition of LGBTI Activist should be a culture