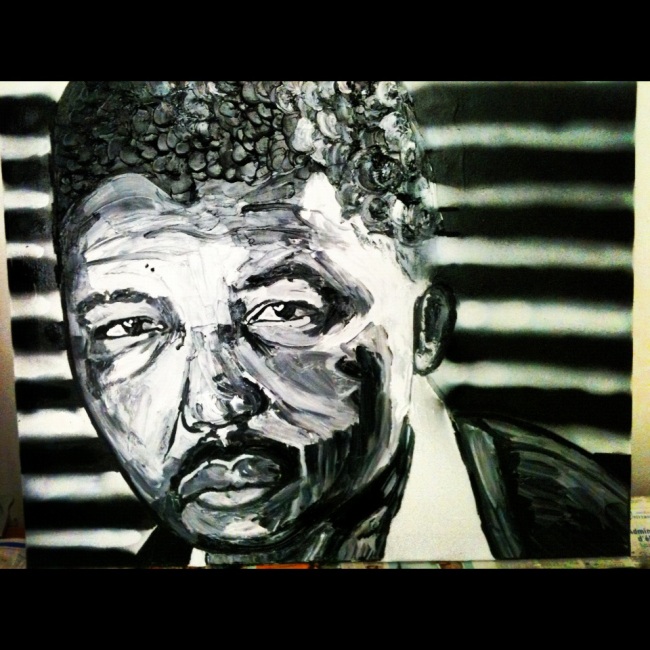 I am an artist who likes to use art as a mirror.
I am a fraternal twin and as a child I thought that everyone had the same set of circumstances!
Being a twin made me aware of my own identity very early because I was always being compared to my sister, who is very different physically and mentally speaking.

I started drawing when I was 7 and my first “models” were cartoon characters from my favourite comics.  You can still see the influence in the way I draw today.  I did not attend an institution for art but my mum nurtured my skills and bought me different kinds of materials to further explore.
At 12, I drew my sister’s profile.  She was my first human model.
Despite being surrounded by loved ones and getting the support that one needs, life can still be lonely.  That is part of our conditioning. Thus painting is like meditation. Not necessarily spiritual but gives me quietness.

In junior and high school I did not get much exposure to influential black leaders.
I discovered the black leaders mostly through reggae music instead of school.
I introduced Chinese ink to my art in 2000.
I made posters to express this identity that did not exist/lacked in my history books back in high school.
In 2011, I commissioned my first black and white oil portrait of Frantz Fanon.

It is up to us to speak about ourselves while shining the spotlight on French history and especially the French colonial past, as it is not widely known in France.  This just breeds more racism that continues to get more and more complex in the community.
I drew my influence from the essay” black skin, white mask”, which was written in the 50s but it very much relevant in our this day and age.

Love led me to oil paint.   My ex encouraged me after seeing a portrait I had made in ink.  I followed her instinct and never stopped.  That was 2 years ago. The insight she gave me allowed me to get more confident and after 3 or 4 paintings, I had found a style that I finally stuck to.

Visual arts especially painting really changed my life. I never thought that it could be such a huge part of me. Just like my sexuality, I did not need to label it before.  I believe that is the way in which I express my humanity, that despite our differences we are really all the same. When I approach my paintings eyes are my starting point followed by the rest of the face.

Early in 2012, I created a whole series and it was a collaboration between
DJ – a poet/writer – and I. The first was Basquiat’s portrait.
She wrote an extract from “chaos” on the first wall that I painted as a background.   Since it worked, we stuck with that method.  DJ wrote “Solitude” on Billie Holiday’s portrait and I also illustrated her poem “Strange Fruit”.  We named our work “To see eye to eye.”

My family and friends supported me a lot and am grateful to them because I managed to organize four exhibitions in one year.
The last two last shows were in Paris, which was quite a nice experience and opportunity because it is the biggest city in France.
It was even more significant because the City of Paris supported my work.  It was also really a great to share with large audiences. Some people wondered why I painted brick walls in the background but I let them interpret it according to their realities. 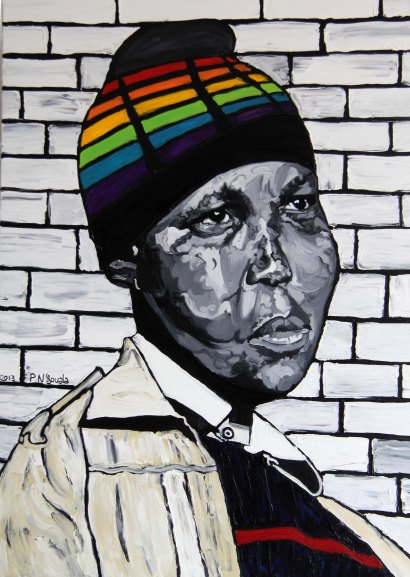 I was very moved by the stories of Busi Sigasa & Buhle Msibi when Zanele Muholi requested me to paint them.  The opportunity came by at a time when I wanted to focus my art on Human Rights related issues.  Their commemoration gave me an answer to a crucial issue.  I was very willing to be part of the project neither as an African nor a lesbian but just as a human being, an artist.
I threw my whole being into this work.

I am so passionate about my work that sometimes I wonder whether I am bordering on sin.   I believe in God and sometimes I wonder if I’m in the right path, since passion can be read as a sin.   I wonder if I am supposed to sacrifice my art as proof of my faith or see my skills as a gift from God and therefore a tool, a weapon to fight at my own level.

Painting is what allows me to feel alive.  It is more about letting the pain, the anxiety and negative feelings out in a positive manner, using my brushes and sometimes expressing it through the eyes of the models.   The viewer is given a chance see all the oppositions on paintings, color, shape and contrasts in harmony together and it makes me feel balanced, happy and accomplished.

My friend Sebastien Onomo commissioned Nelson’s Mandela portrait after seeing my first show in October 2012.
I chose a picture taken before Mandela was put in jail.
A way to remember that its part of his youth that was sacrificed early in the struggle for freedom. The portrait is in oil and the background is in acrylic bomb. I was selected for a contest which happened in late September in the western suburb of France.

I chose the Jean-Michel’s Basquiat portrait and the winners will show their piece in Grand-Palais for the Autumn Salon and we will see the results in October.

I am currently working on Baldwin’s portrait commission by a friend, Keira Maameri.
I also started a Prince’s portrait in a series where I would like to underline the so called gender ambiguity.
Sadly because there are many victims, Buhle and Busi’s portraits belong to a series that is still to come, a tribute to homophobic murders victims in South Africa, first collaboration with Zanele Muholi.

Why I stand on Busi and Buhle’s shoulders

I was wondering how I could address them considering the tragic circumstances. I felt their shoulders were a good part.  It reminds me of a ritual at the end of a prayer, where  you turn your face right and left to send a peace salutation of  “A Salam Aleycoum” to your Djins, spiritual beings in Islam.
When I was painting I became one with them.  It occurred to me that it could have be me.
It happens in so many countries even in France too.  No one is safe from homophobic hate crimes.

Even when we have these laws, it is important to be aware that the struggle continues and never forget that it could happen to any of us even though we think we are protected.
So I thank the Lord that I am here, expressing a dream of peace in my own way.

In the future I plan to be everywhere, exhibiting and sharing. It’s true that I will be happy to exhibit in the US in the future.  I will also be happy to work and show in South Africa.
I am trying to work on a collaboration for next year.