When two men from two different worlds redefine what it means to be a man, to show emotions and express oneself, their worlds collide through dance and they create a powerful piece that shows emotions one could never imagine a man showing.

Lucky Kele and Ronni Maciel got on stage and positioned themselves on top of the small stairway that formed part of their stage. I kept my eyes on both of them, wanting to catch every moment of their performance, because this was all so exciting for me, seeing a South African man share a stage with the profound Brazilian dancer as they were about to perform for an audience at Constanza Macras DORKYPARK, Studio 44 in Berlin.

They started moving, looking back as though someone was calling their names. Their moves got aggressive, hitting the stairway in a rhythmic way. They went down the stairs as though someone was pulling them down, like a struggle happening between two people. I stared at both of them as they got off the stairs and started running, running as if there were being chased by an invisible force.

I immediately thought to myself that this piece could be interpreted as being about love and violence or about love between two men.

They danced around the stage, pulling each other like they were in a lovers fight. Their facial expressions showed love and resentment, pain and happiness. I saw two men connecting so intimately, I could have sworn they are dating or just brothers’ in love.

The dancing moved to the bigger stairway where Lucky stood atop of them and Ronni was on the ground as Lucky threw himself towards his dance partner. Ronni caught him before he hit the ground. He did this a couple of times until they switched places but this time around Ronni was not caught by Lucky, he fell to the ground each time he threw himself over the stairway.

I thought to myself, this is what happens in relationships, sometimes you will be there for someone but that does not mean they’ll be there for you. I could relate with the pain in Ronni’s eyes each time Lucky didn’t catch him when he fell off the stairway.

They struggled with each other, engaged in something like a lovers tiff, wanting answers, needing to be touched and held, both of them showed so much emotion in this piece that it felt real. I could see the pain in their eyes. They were in touch with their feelings in an incredible way.

The play ended at the stairway where it seemed like they were making peace with each other, making love to each other and finally reaching an agreement.

Then it was intermission to prepare for the next performance.

After an hour break, Mamela Nyameza’s performance started. During that period as the audience waited, I visited her backstage to see how she was doing.

She was a bit nervous as this was a new piece and she was exploring her new friend (the puppet).
She got dressed and calmed down a little. I left her back stage and took my seat on the top row. I wanted to see everything clearly and make sure I don’t miss anything.

Mamela asked me to play with the flashlight each time Makgosi Kgabi started flashing with her camera.

She made sounds and facial expressions that showed us how one can go into their defense mechanism and become a puppet, just to survive. Her puppet Miranda did everything to survive, for example, she took on shows she did not feel comfortable with, simply because she needed to survive. Mamela would constantly disagree with Miranda who was what people saw on the outside and her true self was hidden behind Miranda.

Mamela found her voice and she was able to only do what she felt was right and not do things only to survive. She started understanding that wanting to survive doesn’t mean you should compromise yourself. 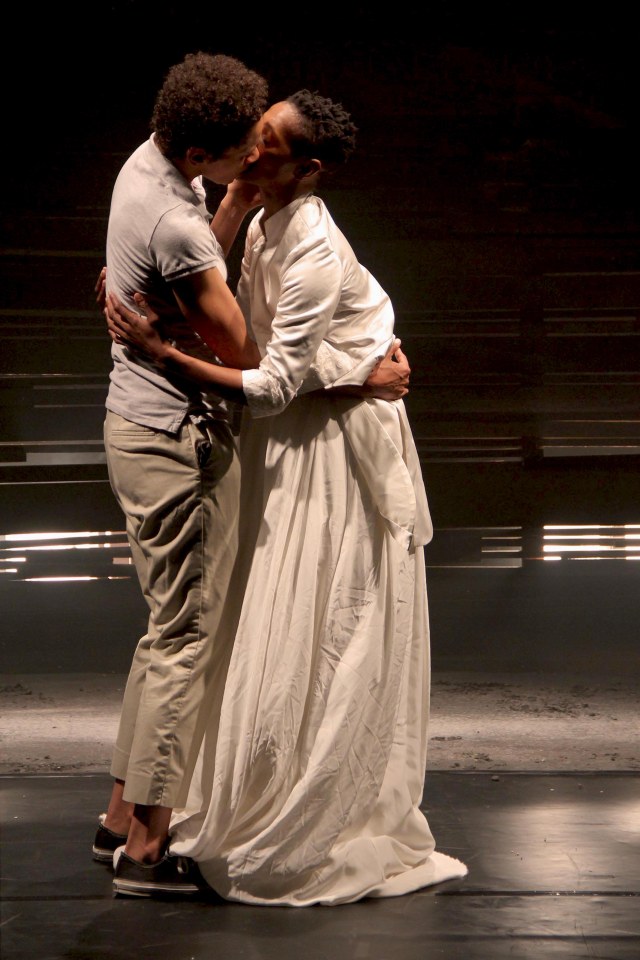