Where We’re At! Other Voices on Gender is an exhibition curated by Christine Eyene at the Bozar Palais Des Beaux-Arts Brussels as part of the month of Photography 2014. As a curatorial project it aimed to amplify the voices of women artists from the Caribbean, Africa and the Pacific whose works focus on identity, the body, gender and sexuality from their personal and socio political perspectives. The works offered as part of this exhibition ranged in medium from photography to video and some sculpture and expanded into various platforms as panel discussions and talks further beefed up the programme.

Of the works selected for this exhibition Zanele Muholi’s Miss Black Lesbian (2009) series; which served as the festival poster, featured alongside the triptych Caitlin and I (2009) and the Amsterdam red light district inspired Being (T)here (2009). 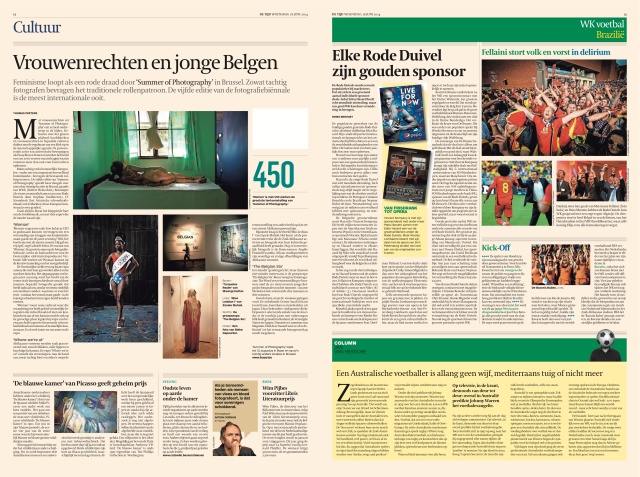 On Monday in the main exhibition hall, artists hung around too nervous to fly off in case TV crews wanted interviews as this was the morning dedicated to such matters. This room served as a bit of a waiting room with jackets and scarves littered all around as artists paced back and forth listening in on the interviews of others. The juxtaposition of Zanele Muholi’s work and Angele Etoundi Essamba’s made for a subtle reckoning of decades and generations of photographers of colour challenging the stereotypical objectification of the black female body. Both artists works dominated this part of the exhibition and formed part of the backbone of the themes explored in other areas of the show.

Zanele was also asked to screen the film ‘Difficult Love’ (2010) which was followed by a panel discussion with Christine Eyene, Sassia Lettoun of Amnesty International and me. The purpose of hosting the panel discussion was to further explore issues presented in the documentary, to expose South Africa’s rather attractive Constitution and contrast it with the realities of township based black lesbians in the present day SA. The panel was also meant to serve as a platform to enlighten audiences on the origins of Inkanyiso and it’s role in documenting queerity in South Africa.

The 8pm screening and panel discussion came after a day of interviews and walkabouts with various media from 11am which was followed by a private pre-opening for funders and partners at 6pm. Meeting with Christine earlier we’d talked of her nomination of Inkanyiso for a local grant.  She shared her enthusiasm for the work the platform achieved, its reach in terms of vocality and relevance within the continent and shared her hopes for its growth. Sitting in the panel with her I was comforted by her sensitivity with regards to the subject matter of the film. Her nuking sensationalism as it threatened to take over the conversation and her informed and unflappable manner throughout the event.

Sassia was a passionate voice of the blue-barb-wired candle, her command on LGBTI issues throughout the continent as well as her organisations’ involvement in each case added further depth to the conversation. When it came to audience participation I loved best a question on why it is we are seeing such an increase in violence, intolerance and state sanctioned homophobia in Africa. I was ready to name and blame American religious fundamentalists; and did actually, but Christine found an example much closer to home. She reminded me that when I was Paris last year there had been a huge anti gay marriage protest and sighted that there seems to be such fires flaring up in all continents but that Africa somehow manages to captivate global audiences as if it suffers from such ills all on its own. To close the evening Sassia stated rather glibly that whenever governments need a diversion, they are sure to find a crowd to protest some anti gay law or another. The discussion was longer than the film, the connections made feel as though they might outlive this life.