I’ve known for approximately two months that I will be traveling to London on March 10 as a participant working on the Faces and Phases 2006-14 photo book.

As an impatient person, I have taught myself to block out any upcoming, exciting expectations, news or events until the time comes.

However, by late last week I could feel the excitement and anticipation swell up inside me.

My mother turned 50 years old on 7th March 2015 and we had a birthday party for her. Arranging the event and the constant bickering between my sister and I over the party helped to get the trip out of my mind.

The day of departure finally arrived and I had been warned about the cold weather and season. I rushed to the mall to try and get some warm gear, to my disappointment winter stock had not arrived, the shops which had stock were just too expensive for me, especially since I spent a lot of money for the party. So I could not arm myself with warm clothing the way I would have like.

My mom insisted that she wants to be with me at the airport because she “wants to see the plane take off.” It meant traveling home to KwaThema from Johannesburg, where she (mom) had arranged with her friend to drive us to the airport. We were running late and since we were not clear on the directions our generous driver didn’t want to drive too fast. I could feel my Impatience building up as I imagined the airport staff telling me “check in time has passed.”

Fortunately there was no drama during check in, and I proceeded to the boarding gate, before realising that I had not eaten all day and I was hungry.

I made my way to one of the shops to buy a snack. I first became suspicious when I noticed that there were no price tags on any of the items in the shop. I decided to grab a juice as a temporary solution to my hunger, until they served supper on the plane. When the person in front of me produced R200 to pay for two sandwiches, two juices and a packet of gum, I knew these people meant business.

My turn came to pay for the 330ml juice and I braced myself for the worst, however I was still shocked when the cashier said R32.

It reminded me just how expensive it is to travel, the fact that my Visa alone cost R5 550, plus another R1700 for the fast service. How these tactics are used to prevent ordinary South Africa such as myself from traveling, while those who are perceived to be tourists who bring their foreign currency don’t even need to pay for a visa to visit our shores. I sipped on my expensive juice and made my way inside the plane ready for the 10-hour flight.

Apart from a screaming baby not far from my seat, I was lucky to find a seat with no other passenger, which meant I could sleep. Fortunately there was no turbulence, so much so that at times I was worried that the plane had stopped moving mid-air. We landed safely at Heathrow airport and I noticed that our flight was full of senior citizens. I’m still curious about why and also saddened by the fact that none of these old people were black or even coloured. It made me think of our great/grandparents who are stuck in their apartheid built homes, some in RDP homes (if not shacks) taking care of grandchildren. How for most of them the longest trip they took in their lives was traveling to urban areas such as Gauteng by bus, train, trucks and taxis to seek employment, while most never even found their way back home.

The worst one for me is racial profiling at airports; being called to the side amongst hundreds of other people you were on the same plane with. Being asked ridiculous questions by a security guard. Questions you have answered already while applying for your visa, which you will be asked again when you reach customs.

The expensive juice at OR Tambo International airport was only the start of my problems. Visiting the currency exchange counter at Heathrow airport I was informed that R150 would give me a mere 5 pounds, I think I immediately dropped a dress size. I was advised to rather visit a bank when I reached London, instead of the airport. I sat outside the café that I was supposed to meet with Zanele Muholi and took full advantage of the 8hours free super fast Internet to catch up on my work.

Once Muholi and I had reconnected we travelled to London, our home that a friendly Oliver Phillips has opened and agreed to share with us. One of the first things I noticed was the efficient public transport from trains to buses, which seems to be used by the majority of people in the area. The busyness and overcrowding of London reminds of Joburg CBD, only difference is that instead of black people its whites.

At home with Oliver Phillips

It was sad to learn about the young people who kill each other in London mostly by stabbing. Seeing flowers laid down in a public space in honour of one of the victims of these senseless killings forced me to remember the black lesbians we have buried in SA townships. My heart was further crushed when I read in the front pages about the unemployment crisis, which is affecting youths in the minority groups, such as blacks leaving in London.

One of my fears is getting lost, especially in a foreign country. Having to venture out into the streets of London the following morning made me anxious, thank God for cabs or Muholi and I might have spent our morning carrying heavy bags looking for The Photographers’ Gallery.

Hopping from one meeting to the next, we then rushed to the Goethe-Institut London office before taking a one-hour train trip to Brighton for the first of four planned university talks for Muholi at the Brighton University.

The following morning saw us running to catch the 9am train and making it to the station with less than 5 minutes to spare. Later I was introduced to the London version of Fanta Orange. I was surprised to see that the colour was not orange, but looked like Fanta Pineapple, only to taste like a bad non-existent Fanta Lemon. 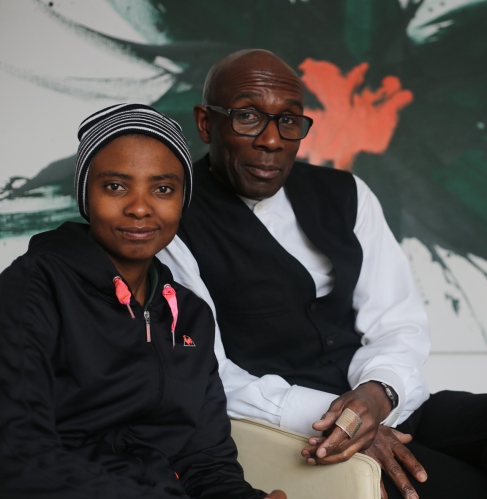 Meeting with Robert Taylor who was mentored and inspired by the late talented friend photographer, Rotimi Fani-Kayode provided lots of insights into the world of black photography in London presently and during the 80s.

After another talk by Muholi at UCL University, Professor Tamar Garb, her husband, colleague and students, entertained us at her home. Indian food was served and my taste buds were excited to taste food that is similar to what I eat in SA.

After the meal; wine and enlightening conversations were shared freely, before being driven to our new temporary home where I passed out as soon as my head hit the pillow, only to be told in the morning that I had snored the whole night (I refuse to believe it).

March 14 had gloomy and cloudy weather. I was scared to even leave the safety and warmth of the blankets. I spent the whole day indoors catching up on my writing and feeling cold. One of our Caledonian Road neighbours spent a part of their evening chatting and laughing very loud, whoever said Africans are the loudest people clearly never met this family.

One more week left in the Queen’s country, all I’m praying for is the weather to improve and to continue meeting other influential and informed black artists to exchange knowledge and ideas with.

2013 June 5: Lesego sharing the work of Inkanyiso at the LGBT conference in Salzburg, Austria

4 Responses to 2015 March 14: Navigating through London