Reality check: Understanding the lives of sexual minority women in South Africa.
– Is lack of knowledge and misunderstandings causing sensationalism and victimhood in the media?

Each time we are represented by outsiders, we are merely seen as victims of rape and homophobia. Our lives are always sensationalized, rarely understood.

What does it mean to be female, lesbian and black in South Africa today?
How do we ensure a more accurate portrayal and how do we contribute to an increased understanding?

The portrayal of African women and African lesbians by development organisations and media is often marked by sensationalism and victimization. Why are women and sexual minorities so rarely shown as active agents of change and persons with different positions and roles? 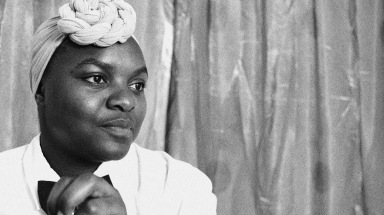 Together with fellow youth activist and poet Maureen Majola, Muholi will share her experiences and reflections on what it means to be female, lesbian and black in South Africa today.

One dilemma when using various media to create public attention is the appeal to emotions, use of stereotypes and simplification.
SAIH has contributed to the debate on this topic within the development sector in Norway and internationally. President of SAIH, Anja Bakken Riise, will share her reflections on how Norwegian organisations can contribute to a more accurate representation. Arne Backer Grønningsæter is a researcher at the renowned research foundation FAFO. His research focus is South Africa, Norway, sexual minorities and HIV/AIDS. Grønningsæter will share some reflections on the struggle for gay rights in South Africa and Norway.