The 17th of September 2013 was our intended day of travelling to Los Angeles (LA).
I arrived at the Inkanyiso headquarters in Parktown, to find the crew doing what they do best, working hard. We chilled for a while catching up on old times and having a couple of laughs while Zanele Muholi finished her packing then missioned to the airport with “Q” (Nqobile) as our driver.

The anticipation was building as check in time drew nearer; we feared that we might be a little late for it.
At the back of my mind I had a nagging feeling that I was forgetting something?

With the amount of noise in my head from the conversation in the car, all I could do was sit there nodding like an idiot. I’m pretty sure they could tell I was pretending to be following the conversation if they didn’t; now they definitely will know.
Cramps were killing me; this was not the right time for this to be happening to me I thought. Could Aunt Flo be visiting town while I’m busy leaving town?
I took a deep breath to try and relax myself and think…
Anxiety was all it was and it was building up within me causing an excruciating pain in my abdomen. I breathed even deeper to try and avert from having another one of these panic attacks I’d been having so frequently.

The check in process at O.R. Tambo International airport was a bit of a schlep.
For starters, there were the usual attendants who are too busy running their mouths to even notice you standing in front of them, trying to get their attention.
Why is it that when a black person presents legitimate papers for anything official, they have to be scrutinized like some sort of criminal?
Just a general observation I made of how the front desk lady looked at us with a suspicious expression whilst treating the white man after us with so much courtesy.

Then there was the issue of checking our bags in which I didn’t want to do. I’ve taken a domestic flight before and never had this experience. I had my lotion dumped in a bin which was-kind-of depressing, I can’t stand having ashy knees and elbows.
Just as a matter of interest anything more than 100ml isn’t allowed on a plane whether it’s a liquid or lotion.  I thought to myself,  “You big dummy, you know Americans and American associated companies are afraid of bombs.
Not that I’d stick a bomb in my bag but if I did I wouldn’t be dumb enough to smuggle it in a tub of lotion where it could easily be detected by X-ray machines…

I received my first international stamp on my passport-YAY!
At 19:15 we set off into the air outside of African borders. It was an interesting flight to Dubai.
I had a long talk with my travel partner, getting to know each other, passing a lot of time chatting before she passed out on me, exhausted from the work she had been doing prior to our visit.
I passed time watching movies and listening to music.
Arriving in Dubai at 05:15 on the 18th of Sept. was pretty exciting; stepping out of the plane was a little disorientating though. The sun was already peaking in the horizon, the heat hit me in a flash and it was unbearable, it was hot and humid much like Durban.
The air was thick with the sea breeze; we waited at the airport for our connecting flight to our final destination. I discovered that Dubai is a beautiful city, with an integration of modern technology and various cultures of the world, an international hub of business and beautiful women. I can’t be a lesbian and not notice the women of course.

Three hours into our fifteen-hour flight to LA, the cramps started creeping in my legs, my back was aching so much that numbness started settling in.

I passed out for two hours, which felt like a lifetime to me. With all the time left there was nothing to do but watch movies and listen to music. I felt like a kid in a candy store, so much variety that I didn’t know what to pick. I watched and jammed to a bit of everything.

Honestly at some point I got bored and tired, America is a far place to travel but the excitement of going there overshadowed that.

Upon landing the fun part began we had customs to go through. Greeted by the security who take their jobs so seriously was nerve wrecking. I wasn’t sure if they’d let me in.
It’s been known for them to turn you down from entering their country. This wasn’t the case though it was smooth sailing, guess the only people that think I look suspicious are the South African Police – the irony of it all was almost laughable.
Just so you know Los Angeles looks nothing like what we’ve all seen on television.
Oh how the media have corrupted our minds with silly stereotypes of glitz and glamour. We then chilled and the terminal for our driver to fetch us who was a bit delayed but no worries.
That presented a chance to Skype with a good friend and to discover what the Skype world is about.

I’m still oblivious about that world and I’m not ashamed to say it.
Our driver came at a time when the fatigue had set in.
Legs and feet swollen.
Bloodshot eyes and all.
What seemed like a drive that took forever we finally made it to our hotel in the beautiful Little Tokyo District at the Miyako hotel.
With Muholi completely zoned out and half past dead as she threw herself on her bed, first thing for me to do was shower and follow suit. 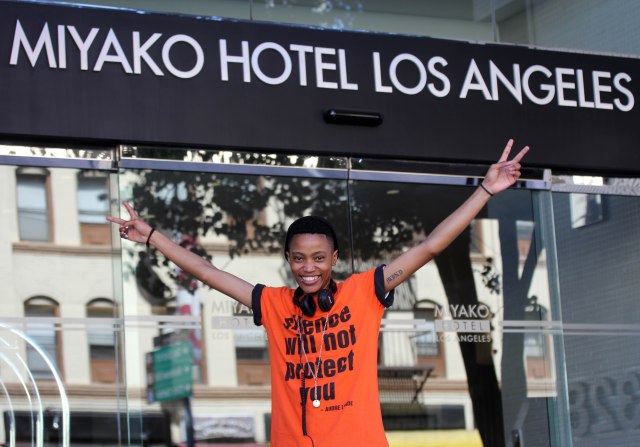