‪I did not live through the apartheid era, but I now know, how it feels to be asked for your identity document in a public space.

On Saturday after attending a great exhibition by Zanele Muholi and a great dinner with wonderful individuals, I was introduced to wild meat (a deer) by Monica Holmen.

She suggested it after I told her I wanted to try something new. After that I went out partying. There was gay pride “kick off 2015 Pride parade“ as well as two other LGBTI events happening that night.

Rikke Komissar gave me details of the  people I would be joining. When we got home I contacted them and because I don’t know the place very well, they said they will fetch me at Gronland, a station away from were we stay. Nina Bahar whom I met at the exhibition, her partner Kitty Bahar, the fun and energetic Maryam Moezzi, and Nina’s sister Hasti Hamidi people I love and take as my very own LGBTI family came to fetch me, at the station.

We then walked to the club Sentrum Scene which was not very far. As we approached the door and the people I was with were allowed in, I was stopped by the “bouncer” and he said I can’t go in. They told him, “this person is from South Africa and she is an artist.” I think they made it worse by saying that because he then asked for my passport and I looked at him with a face that says ‘really are you serious?’

He didn’t even care about how I looked at him. Nina asked if I had anything in my wallet which has my identity and found a student card but he still didn’t want me to enter. My team called their white friend Hans Heen Sikkeland who was inside. He came and tried to reason with the guy and persuade him to let me in but the guy was not interested he wanted my passport or I am not entering the place and he spoke in Norwegian which I found to be very rude and provoking. 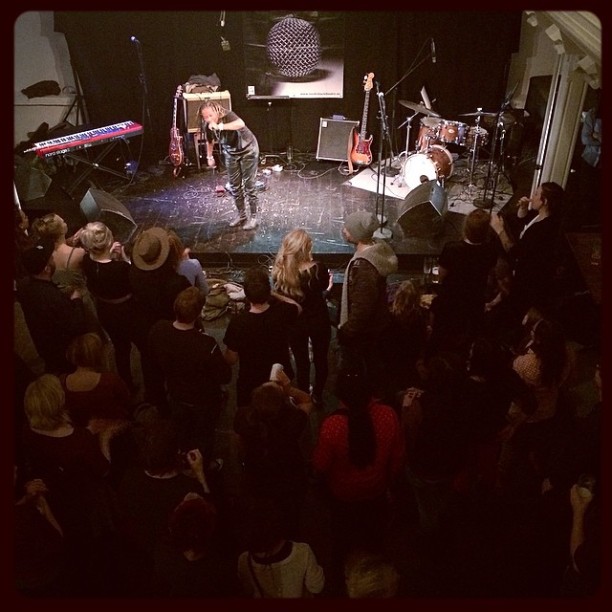 I thought to myself this is how my parents and grandparents felt in the apartheid era. Hans then asked if I have a picture of my passport and I told him I can call someone who can send it.

Hasti then borrowed me her phone because I didn’t have internet connection and I emailed and told Muholi to please send me a picture of my passport and Hans asked the guy if I can show him a picture he agreed.

We waited a minute and received an email from Muholi and I showed him and we entered. We went inside we were welcomed by two gay men and observing the place the majority of people there were white people.

Nina introduced me to some, but at that state I was not in the mood for white people. I noticed that the black LGBTI community was not noticeable and it was like we were not there.

I asked Nina if there is any other black homosexual person?
She introduced me to Eddie Edris a gay guy from South Sudan and Nina told me he sometimes feels lonely because he is almost the only dark skinned person in this gay clubs and I also met the crazy and exciting Susanne Demou Overgaard.

We were standing as a pack and we were obviously the minority the drinks were expensive and to be honest at that moment I regretted going out that night and it made me miss home because I didn’t expect this from people with the same sexual orientation as me.

Nina and I had a discussion she explained to me that in Norway’s homosexual scene, not all is goody goody. There is a lot of racism especially against Muslim people. I was very disappointed because I had so many good things to say about the place (guess its true what they say ‘not all that glitters is gold’).

Then Maryam and Hasti suggested we go to different clubs and I was keen because I didn’t want to be there. We left and it was me, Maryam, Hasti and I, while Nina and Kitty went home because they had to wake up early.

We walked about 15-20minutes I must admit Oslo neighborhoods are very safe you can ask directions and the people will kindly help no matter how drunk they are. Before going to the event we had to be in the list of people going on their Facebook event, things this side of the world are controlled even events.

The name of the event is Queerdo which happens every once a month. When we searched for the entrance the ladies at the door were very welcoming. After paying, she asked me were I’m from I told her and she asked for a hug and said if anyone gives me trouble or I need anything I should come to her and it was like she almost new what had happen.

We went and I met some people who were at the exhibition and told me they enjoyed the show and went telling their friends haha! I was famous for being South African some girls asked to touch my skin and called others to come and feel how soft it was. The place was welcoming and warm with good people who are just gay and happy. We left the place when it was closing time at 03am I headed home.

I enjoyed myself that night excluding the drama I had. I still love Norway and I’m hoping the racism will end.‬

Sicka relating how she experienced racial slurs from a bouncer at one of nightclubs in Oslo on Sat. 21/02/2015. Here she spoke at the Norwegian Council for Africa on 24/02/2015.  Photos by Zanele Muholi