I sat down for a reflection session with photographers Lindeka Qampi and Zanele Muholi a few days after they documented Gift Makau’s funeral.

Muholi requested for the interview as a way of unloading and shedding the pain, explaining that its hectic documenting hate crimes, and they don’t even have counseling.

“When people see you holding the camera, they don’t realise the amount of stress we carry, adds the visual activist.”

Some of the reasons that bring pressure on these photographers is visiting the crime scene, talking to family members who have just lost a loved one.

Lindeka shares that for her, documenting hate crime is traumatic because it reminds her of her own ordeal as a victim of crime.

She is motivated to document it, because it gives her a chance to educate the community.

Lindeka says visiting families like Disebo’s is hard on her as a mother, especially since Disebo was a last born that makes her think of her last born, and adds that its not easy seeing the sadness in their eyes.

“Rape is increasing in our country, and the police would rather harass a hawker selling on the side of the road, adds Lindeka”.

Lindeka further elaborates that as documenters they capture and visualize everything, and working with the family for four days means a bond is formed.

Muholi says when she first heard about Disebo’s killing it was still sketchy and a lot of hearsay.

“The first thing on my mind was not another hate crime, not another queer born free, not on women’s month,” and adds that she went to bed that night with a heavy heart and hoping it was wrong information.

Staying five minutes away from Constitutional Hill, (which is where this interview was conducted) also brought more questions to Muholi, thinking about the new LGBTI task team meeting that was held at the end of April 2014 where the issue of hate crime was discussed mainly at the venue with various stakeholders (activists) and some activists from different provinces.

However her fears were confirmed the next day when she was given the full details and asked to intervene.

“The first questions that come to mind is resources, finances to go there.”

Two days later, Muholi and Lindeka were on their way to Ventersdorp from Johannesburg, and met the family and counselor of Tshing township whom Muholi described as practical, kind and caring.

Muholi said the counselor reminded her that there are women who care about other women.

However, when they first entered the scene where Disebo lost her life, Muholi  immediately went on her periods which was unexpected and early.

Lindeka reveals that one of her goals now is to go back and document Disebo’s background, to be able to tell her life story.

She says while in the area she heard about gangster groups that are active in Tshing township, which contributes to the crime in the area.

While Muholi says as a person who works with lesbian youth, such murders hurt her because she views the victims as “one of us”.

She adds that she cares as an activist, as a human being and seeing the pain in the family that has just lost someone takes her back to other hate crime cases she has documented.

“I thought about how victims like Gift and Dudu Zozo die in their neighborhood, come from poor communities, are in their 20s and hard workers ambitious to become breadwinners in their families.

Another thing that disturbs Muholi were the objects used: a toilet brush inserted inside Dudu’s private parts and the water hose in Gift’s mouth, the half naked body and dying before they can even enjoy the freedom of democracy, and concludes by saying she doesn’t want to document another hate crime. 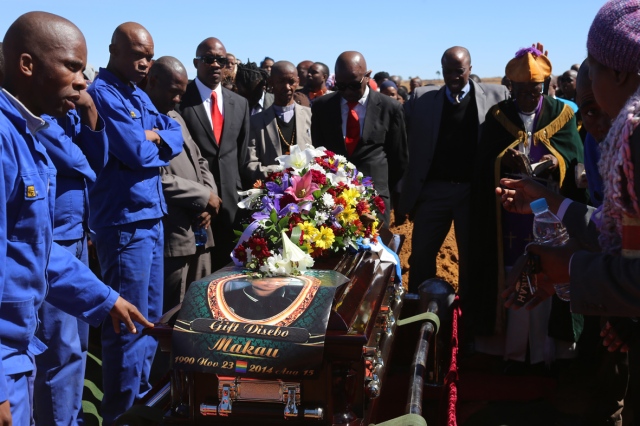 Before the coffin of Disebo Gift Makau was lowered at the cemetery in Ventersdorp on the 23rd Sept. 2014

Odidiva, Cape Town based artist and activist who attended the funeral of Disebo in Ventersdorp last month.

More reflection sessions to be published in the next few months…

2014 Aug. 23: Relatives and friends shed the tears at Gift’s funeral and some fainted