2015 March 19: The censored and oppressed recognized

While many choose to play it safe in life, with comfortable 9-5pm jobs, living in safe neighborhoods, engaging in safe conversations, and staying out of their corrupt government and their associate’s way. There are brave women and men who refuse to play it safe and tackle issues affecting their fellow human sisters and brothers, putting their lives at risk and are even killed and/or imprisoned for their actions.

These fearless individuals, such as Angolan journalist, Rafael Marques de Morais were honoured on March 18 during the 15th Index on Censorship Freedom of Expression Awards 2015. The ceremony was held at the Barbican Centre, in London.

The common cliché about how tough the judge’s decision was during competitions, awards or pageants was clearly evident in this case, especially when viewing video clips of the nominees in the four different categories during the awards. This annual event looks at “the most creative defenders of free speech in the planet.”

Working as MC for the night, comedian Shappi Khorsandi had the house roaring with laughter with her witty and humorous way of talking about serious issues, which involve politics, sexuality, religion, and terrorism. No one was safe from Shappi’s jokes, including herself and her family, as she shared her experience of being an Iranian born British, whose family was forced to flee their country of birth due to her father’s line of work as a writer. The comedian also spoke about the negative impact experienced by her father for not being able to continue working and expressing himself in his own language.

Highlights looking at “the year that was” were played in a short video clip that featured Journalists who have been arrested in Egypt, the Charlie Hebdo killings in Paris, France and the recent shooting at a Copenhagen cafe were a debate on Islam and free speech was held.

The index judges conceded that the journalism category was so tough they had to declare a tie. Safa Al Ahmad from Saudi Arabia who has spent the past three years filming mass uprisings in the Eastern Province of her country. Her 30mins documentary titled Saudi’s Secret Uprisings has resulted in Safa facing violent online threats and being advised not to return to her country. 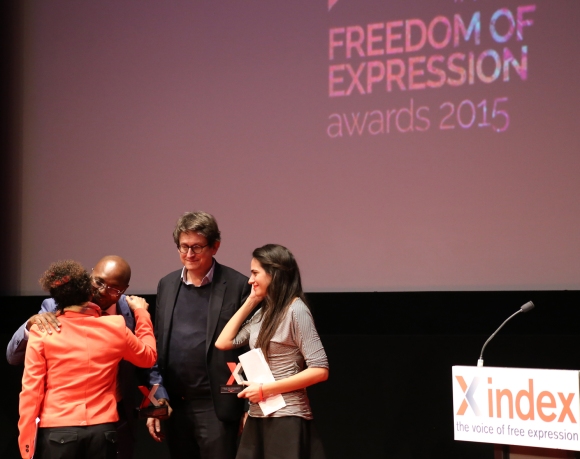 Sharing the award with Safa, Rafael Marques de Morais’ journalism exposes government and human rights abuses in the diamond companies. Apart from being sued 1 million pound (close to 18 million rand), he is due to appear before an Angolan court, faced with 9 various charges stemming from his reports about the diamond industry. Asked for comment on how African journalist can produce fearless investigative pieces, Rafael’s advise was for journalist to “form a band of brother and sisterhood, support another” in order to have strength and safety in numbers.

Another African scooped the Campaigning award, Amran Abdundi, a women’s rights activist from the Kenyan and Somalia border was presented with the award.

Giving one of the most profound speeches of the evening and sharing that it was her birthday and one she will remember forever. Amran dedicated the award to women who are part of her organisation Frontier Indigenous Network (FIN), which has set up shelters, despite receiving death threats. FIN supports women who are vulnerable to rape in conflict areas (including gang rape), as well as those experiencing female circumcision. “This award is for Kenyan women who are rejected by their families for having children out of wedlock, to the women who now have constitutional rights to own property, live stock and land.” The activist said she has been called many unmentionable names for her work, she added that she does not do it to win awards but because it is a grave reality.

While Tamas Bodoky, founder of Atlatszo.hu an investigative news website in Hungary was honoured for his relentless promotion of a free press in the digital activism award. Despite being blacklisted by his government, he continues to run workshops to help protect investigative journalists in his country were media faces a constant threat of suppression, media taxes and police-run office raids.

The arts category provided a mixture of musicians, rapper, cartoonist and a performance artist. It was Mouad ‘El Haqed’ Belghouat who took the award with his radical lyrics. Born in Morocco in 1988, Mouad has been jailed three times since starting his rapping career in 2011. His music raises issues of poverty and government corruption, which mobilised Moroccans to protest against their government. Getting on he index stage, Mouad thanked the organisers of the awards for helping him to secure his visa, which was a challenge.

He dedicated the award to his mother and “those who have been arrested, are arrested and will be arrested,” for standing up against the Moroccan system. “They can kill us, but you can’t kill a thought/idea or put it behind bars,” said the courageous youth. Before singing one of his songs, Mouad expressed his hopes of one day having the freedom to express himself by speaking and singing freely in his country.

2013 March 24: Recognition of LGBTI Activist should be a culture