This is my story about the remains of pride, which I had the opportunity to experience. My reality of sharing space with total strangers that I met in Johannesburg, during the Yithi Laba Intergenerational Dialogue conference. The event was only one weekend (5-7 June 2015) but I became fond of them more than anything. We shared a lot of experiences even after pride. 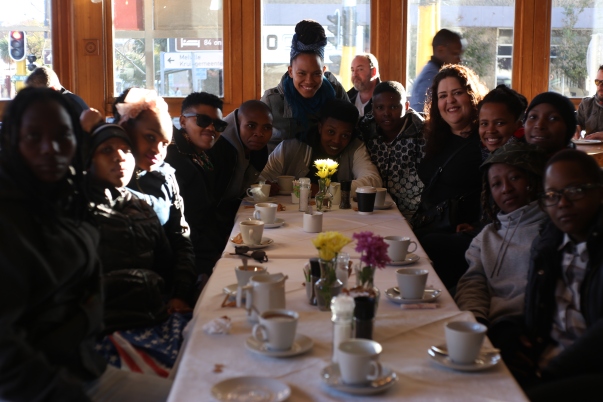 I was with, Thando “Toodles” Nkonzwana, Thembela “Terra” Dick, Tinashe Wakapila, Sam Ndlovu and Liz Choto, who is Tinashe’s straight friend. Unlike the rest of my friends, I was single and I had not grabbed any girl/woman’s heart. I decided to view pictures from the previous day’s Durban pride to avoid getting annoyed or bored.  As always, the conversation was about our views and comments about the previous night’s events, which was pride. We had to go back to the flat because I had a performance linedup. When we reached the flat all the girls had to bath together because Terra said we are always late. I don’t blame her, it took us 5 hours to shop for the things we needed just for the Pride March.

It took us an hour to get ready. I had already called Marcia, to let her know that we are running late for my and Tinashe’s performance. We were finally on our way to Cool Runnings at 19:25pm. I’t didn’t occur to me that I am about to be on stage and pour my heart out.

How it happened for me and Tinashe to end up getting a poetry slam performances slot. I got a comment tag from Lerato Dumse. It was a call for artists who wanted to perform at The Retro Bazaar in Cool Runnings that same night. It had been so long and I owed myself the freedom I always claim. When I inboxed Marcia Buwa, who had posted the Facebook status, I ended up performing that same night. They gave me two slots but I decided to give one to Tinashe. When we got there I was so nervous, I was shaking. I felt like I was going to be making love for the first time. At some point I felt as if I was going to get my period. I got on my phone and called my flatmate Phindi and talked to her for a few minutes and she said, “make love to that microphone.”

Anelisa “Annaliyzer” Stuurman who was the MC, called us to the stage. As Yithi Laba sisters, from Inkanyiso, it had a nice ring to it. Tinashe went on stage first and did her piece. The crowd was silent, watching and listening to the black beauty dressed in black. Terra documented the performance, while we were making history.  Tinashe’s performance was Spoken word about marijuana inter-twinned with lesbian activism. It brought those energetic moments and freedom of expression and untangling of chains, brought by a long time of not performing. We nailed it and it was amazing.

When she finished, I knew I was next. A cold wind blew across my chest, while my chest had drums. The stage was calling and I had to accept my calling. I was prepared and pumped. With thunder and lightning in my chest and knots in my stomach, I introduced myself and started my offering titled, “Where I died”. I was reading from my phone but soon the words of the poem were not coming from the previously written texts but from the oppressed words that I had shut down, as a result of spending years not writing.

I loved the crowd’s reaction to my piece, even thogh I didn’t like my performance. I felt as if it was just a tip of the iceberg, a scratch on a surface, I did not unleash the power of my words. There was once again lighting and thunder on my chest. I was so mad at myself, even when I got praise from Tinashe and Liz, I still said I didn’t like my performance and din’t want to listen to it. I beat myself up because I know it was nothing compared to what I had to offer.

I breathed fire, I performed with a King Kong chest beating effect, and I had once moved mountains with the words I spoke. I was so mad at myself for letting my fire burn out. Now I was just on stage uttering words with no fire. Tinashe, Thando and Liz told me they loved it, Terra said the same thing too, it made me smile. Sam told me not to beat myself up for the feeling, “the crowd loved it.”

After the emotions and other performances, the night was still young, we had moments of fun, while saying goodbye to Durban.