“We are not just about our sex, or just about what is between our legs, or what is on our chests, we live and eat; and there are so many socio economic factors that affect us.”
– Fikile Vilakazi, South African Feminist Activist

Excitement and eagerness lifted our spirits as we moved from Oslo Airport, headed to Oslo city on June 19 2015. Everyone was tired, having travelled for more than 15 hours from Africa to Europe. However we were ready to commence with the Visual Activism Cultural Exchange Project (VACEP), the reason for our trip to Norway.

VACEP is a pilot collaboration between a South African queer organisation Inkanyiso media and Kunstplass 10, a gallery in Oslo. Lindeka Qampi, Collen Mfazwe, Zanele Muholi, Christie van Zyl and Lerato Dumse are five South African documenters, photographers and writers who took part in the two-week project. It was brought to life by Vibeke Hermanrud and Henriette Stensdal, founders of Kunstplass 10 and Zanele Muholi, founder of Inkanyiso, visual activist and photographer from South Africa.

We posed for a photo with Fikile Vilakazi. on the (2015/06/23) before her SA departure.  Photo by Vibeke Hermanrud.

What I did not expect in Oslo was to have many parts of the city flying the gay flag high. It was really encouraging to see the Oslo community embracing and supporting LGBT pride from government buildings, businesses, and private homes who hung banners and flags.

Barely an hour after arriving at Kunstplass 10 on Friday, June 19, we had to rush to the first Oslo pride event. It was the opening of pride house, which was located at Litteraturhuset, where many of more than 150 pride events were hosted, during the 10-day celebration. The mayor of Oslo, Fabian Stang from the Conservative Party gave a speech and informed the house about a new LGBTI action plan that he received a week before.

The stage was then taken over by public figures that identify as LGBT, amongst them pop singer, Tooji (Touraj Keshtkar) who has recently released a music video depicting sexual scenes between him and a priest inside a church. The six-member panel comprised of a national radio station presenter, a sports commentator, labour party politician, former financial minister, as well as a former secretary of children and family affairs. The group discussed issues of coming out in the 80s as well as coming out in rural areas and being born to a religious family.

Going through the pride programme during our first VACEP group meeting helped us to find events that we were interested in attending. One of those events was a talk about LGBTI Sámpi people. Tobias Poggats’ talk about the Sámpi community, an indigenous group of people colonised in Norway and Sweden, became one of our priority events to attend. The Sámpi people are described as a minority, making their LGBTI community a minority amongst a minority group. The story and lived experiences of the Sámpi community resonates with the reality of black South Africans, who suffered colonialism. Tobias spoke about a language and cultural wipe out experienced by his community.

We hopped from one discussion at pride house to another. One of them was a seminar titled, “The United Nations, Sexual Orientation, Gender Identity and LGBT People- Free and Equal?”
The seminar was aimed at finding ways for governments and civil society to work together in promoting the rights of LGBT people in a UN context. After a brief tea break the second session, which was a panel discussion was conducted. It looked at cooperation between officials, multilateral organizations, NGOs, and activists involved in diplomatic missions. South African feminist activist, Fikile Vilakazi, whose focus is on sexuality, gender and socio-economic justice, was one of the six panelists. Drawing from her activism experience spanning over two decades, she highlighted the need to work together globally. As part of her discussion Fikile said, “we are not just about our sex, or just about what is between our legs, or what is on our chests, we live and eat; and there are so many socio economic factors that affect us.”

Our next encounter with Fikile was at the Canadian ambassador Artur Wilczynski’s house. He hosted a garden party to celebrate LGBT pride on June 22. Artur and his husband shared their life and love freely during the Monday night private party and had people dancing to live music.

During our stay in Oslo we also met with author and artist, Linn Cecilie Ulvin for a queer writing session. We shared our writings, photographs and shed some tears while dealing with the topic of rape, which we find ourselves forced to deal with as black lesbians from South African townships. 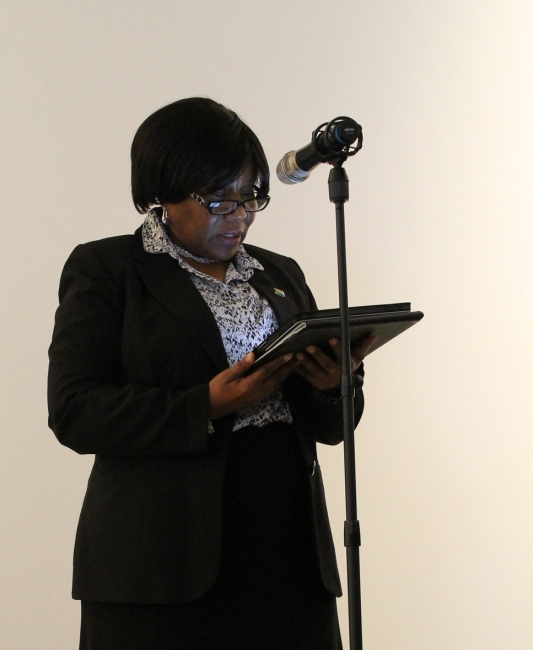 One of our most memorable highlights was courtesy of the South African Ambassador to Norway, H.E. Miss. Queen Anne Zondo. The ambassador was visible and attended some of the pride events, interacting with us warmly. Her office responded positively to our request to have an interview with the ambassador. We visited the South African embassy on June 25, for a profile interview with the ambassador. Warm, friendly, approachable and soft-spoken, Queen Anne shared her knowledge and thoughts of South Africa and closed the interview by singing one of the late, Gibson Kente’s songs, which she picked as her favorite song.

On Saturday June 27 we woke up with extra vigor, inspired by the pride parade, which was starting at 1pm. While posing and photographing each other on our way to the parade, an old woman who saw us carrying this strange flag came up and asked, “which country is your flag from?”
Attempts to explain that it is the LGBTI flag seemed to confuse her. Even breaking it down and saying Lesbian, Gay, Bisexual, Transgender and Intersex, left her with a perplexed look.

So we continued with our journey and arrived at Kafé Saba, which was the meeting spot for Skeiv Verden (Queer World), an organisation for people from minority groups who experience love, sexuality and attraction for the same sex. Many of their members are from different African countries; most of them have left their repressive countries due to their sexual orientation.  The mood inside Saba was happy and infectious; people were doing last minute touches on their outfits, having their faces painted with rainbow colors, while dancing to the music in the background. It was good to connect with Africans.

During the parade we saw a lot of couples with their children; meaning people are taking full advantage of having same-sex marriage adoption and IVF/assisted insemination available in Oslo. The presence of parents of LGBT people and heterosexual couples was a good sight. While the sun shined bright, thousands of people waited on the sidewalks, shouting excitedly and taking photos as the parade passed by. It was also our first time seeing so many pensioners who are part of the LGBT community.

When we arrived at Pride Park where the parade ended and the party started, there was a line of people waiting to enter. They were very strict, not allowing people to come inside the venue even with their much-needed bottles of water. It really made one think about some of the reasons that caused South African prides to be divided between the haves and have-nots. Speaking to some of the locals who are not white, it was clear that they don’t feel fully included in the pride, especially where the music selection is concerned, yearning for pride to be more politicized about the issues affecting marginalized and disenfranchised people, instead of just a celebration.

2015 July 8: Reflections of co-organising an exhibition