The session starts with Zanele Muholi asking how many participants are in the project. People have to start writing, and Khanyisile Mtungwa is asked to borrow fellow participants a book for them to write on top of. “You will not be this squashed tomorrow, we are going to be alright.” Muholi promises.

“Wish all your mothers a happy mother’s day,” requests Muholi while writing down the date May 8 2016. The activist then requests that no one be late for the Kwa-Thema Photo Experience (PXP) when it continues the next day. This part of the programme was reached after six of the seven expected participants had arrived for the first day. Boitumelo “Tumi” Nkopane was the first to arrive that is because the workshop was held at her home. Luyanda Mthembu was the first to arrive at Tumi’s place before me and the facilitators Lindeka Qampi and Zanele Muholi arrived. Khanyisile “Khanyi” Mtungwa, Lerato “Maphike” Rafedile and Lebogang “Lebo” Mashifane then arrived, allowing for the workshop to commence. 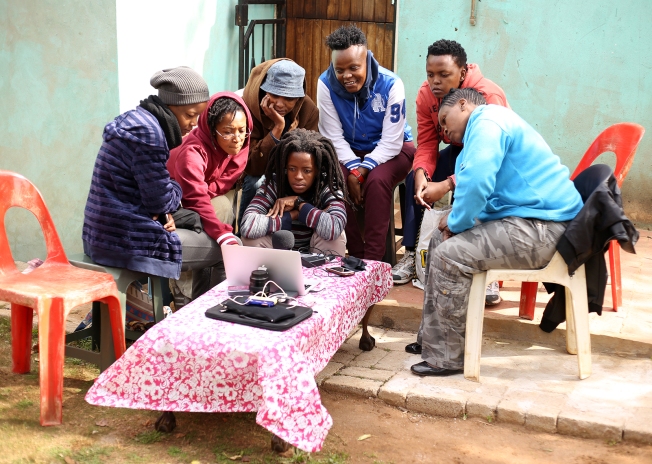 Muholi, who has invested much of her career documenting black LGBTI community members, pleads with the participants, who identify as Black Lesbian Youth (BLY) not to be late the next day, while admitting that she too was late for the first meeting. Muholi then informs the group that their brief is to write the history of Kwa-Thema. During the first engagement, it is established that four of the six members are members of Abanqobi. The group consists of mainly youth members.  While still addressing the group, Muholi asks that the group direct any questions to her if clarity is needed. Muholi then informs the participants that an exhibition will culminate from the workshop. The activist then informs the group how society, including the police service use photographs in their investigations.

Three of the members Tumi, Maphike and Khanyi have recently completed a computer training and Muholi reminds them of how important their work is, how to say it on a computer. Muholi reminds the group that they can continue documenting their township, which has drawn interest from different researchers, photographers and writers from different parts of the world. Muholi informs the group that they cant just limit their voices to speaking about “being killed.”

With no other reference present, the group has no choice but to assume that this training is the first of its kind in their township. The brains behind Faces and Phases believes it is only fair that she share the photography skill, since she has photographed all the participants of the 2016 Kwa-Thema Photo XP. “I get paid to be a photographer, it is not painful to me. I have travelled with Lerato and Lebo, they know how this thing works.” Muholi then encouraged the PXP participants to be the first to document their hate crimes. 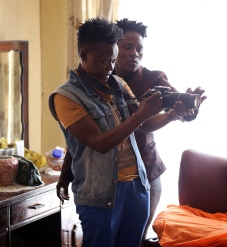 Participants were informed that they would shoot everyday and their work would be part of a presentation during a Visual Activism Cultural Exchange Project (VACEP) in Norway, Oslo next month.  The six participants were reminded that there is a lot happening in Kwa-Thema in seven days. Khanyi was informed that her grandmother was a very interesting character, with a rich history, while her home gets some good sunlight shining through. A head count revealed that five out of the six Photo XP participants are unemployed.

“It is one thing to have a talent, but it is something else not to be able to even provide for toilet paper at your home,” said Muholi. “Let us teach ourselves to read daily newspapers.” The award-winning artist informed the group, “each and every best picture captured will be your certificate, each and every project completed will be your diploma, and each and every exhibition will mark something on your CV.” Referring to photography, Muholi said, “Photography is the best thing that I have done, so if I don’t share it, I will be unfair.”

One of the first questions came from Tumi Nkopane, who wanted to know if we would go out as a group. As part of the incentive of the workshop, Muholi proposed field trips. She also informed the group that that the overall theme will be on self-representation. “This is going to be a practical experience,” Muholi proclaimed. She shared her plans of having an exhibition of the produced work in the same township. Amongst the subjects tackled was the budget needed to host such workshops. Half an hour after starting the session, Muholi then opened the floor and invited participants to speak and ask questions. Lebo was the first to speak; she gave a suggestion that people first shoot their foot or face before starting to shoot, as a way of separating pictures when one camera is shared in the group.  “I love photography and in my world I think everyone should take photographs, because it is nice,” Muholi said before adding, “Now we need to know how to make money out of photography.”

Next to speak was Luyanda, she revealed that the main history that she knows about Thema is the story of Job Maseko, who fought in a World War. Luyanda admitted that she doesn’t know the history of the LGBTI community in Kwa-Thema.  Khanyi Mtungwa confessed that she never liked studying history while still at school, but believes the project will help her to know more about the history of Thema. As one of the participants with knowledge of LGBTI history in Kwa-Thema, Khanyi spoke about a house in Legodi Street belonging to the late Musa Moses Williams, which housed many LGBTI members in the past. “The reason why I agreed to participate in the PXP is because I want to learn more, gain a skill of photography and make a mark,” Tumi told the group. She reiterated from Khanyi’s knowledge of LGBTI history.

The LGBTI history touched on a sore point, when Tumi reflected on the recent history, which is the gruesome killing of Eudy Simelane, Girly Nkosi and Noxolo Nogwaza in alleged, hate crime incidents. Touching on a personal level, Lebo shared the story of her aunt, Pricilla Mashifane who also dated Eudy and was one of the people in Kwa-Thema who came out as HIV positive, when the virus was still taboo. Lebo’s recollection sparked Khanyi’s own memories as a young lesbian who frequented Pricilla’s home and hung out with older gay men, some of them now late. Muntu Masombuka was also remembered, and hailed as one of the activists in the forefront of HIV/Aids awareness.

The brief was then divided into four panels, participants were asked to produce work on Self-Representation, My Home, Landscape as well as Queer and mainstream history in Kwa-Thema.  “I started appreciating my second name last year, I have realized that our names follow us.” These were the opening words of Lindeka Qampi, a co-facilitator. She started her schooling in the Eastern Cape, before moving to Cape Town and completing high school in 1995, I was delayed by many things including riots. The mother of four shared about her dreams of doing careers such as nursing and teaching, but life had other challenges that prevented her reaching her goals. “My mother used to force us to sell sweets, at the time I thought she was hard on us, but as an adult I now realize she helped us.” After her sales business collapsed, she had many pressures as a mother, which led her to gambling and ended up being addicted.

Qampi’s mother who worked with skills development invited her to participate in a sowing project. Through an acquaintance from the sowing group, she heard about a photography group. Being given the wrong address didn’t discourage her, instead she went back to the group member and begged him for the right address. Ten years later and Qampi has made a career out of photography. She encouraged the group to use photography for personal healing. She informed the group about her new venture of writing poetry. Before closing the first session, Muholi and Qampi presented the images produced by learners from Aurora Girls High School in 2014 and exhibited at their school. The participants were reminded that they need to rally together and treat each other like family members, and not allow anything or anyone to come between them.