2014 July 16: Through the eyes of young women photographers

“I am proud of the Aurora visual project. It is a very powerful and strong project, if I were to compare it with previous projects I have co-facilitated before.

For me, photography needs to be included in the school curriculum, especially for those who will never have the opportunity to go to University. Indeed many teenagers are unemployed in the townships, because of their poor results in high school.   My daughter is an example of this circumstance.

In the townships, photography is a new concept. What I am doing is giving back what I have learned, to the people – my experience with photography. I don’t want to die without sharing what I know.

I was 36 years old when I started photography. It came by accident in my life: we never know our future. 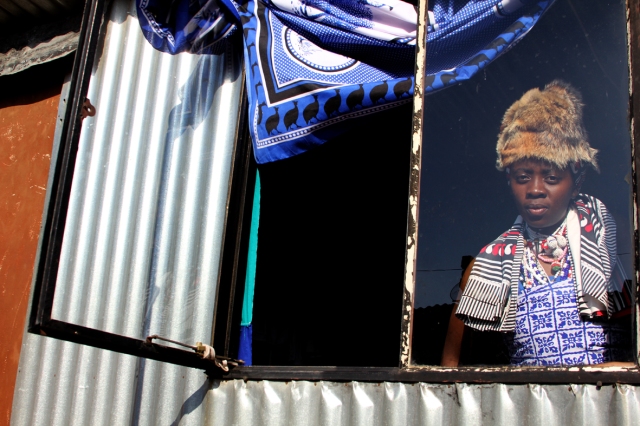 Katlego Mofube is a 22 years old proud lesbian and traditional healer from the middle of Soweto Naledi East. She was born in 1992.

As all the traditional healers, she did not choose to become a Sangoma (traditional healer) but she believes it is a gift from her ancestors. They are the ones who give Sangomas the gift and this is not something you can run away from. If you try, it will haunt you until you die. Therefore, Katlego choose to accept the gift from those that have gone ahead.

The gift came unexpected and she fainted after her name was called by an ancestor.  She had always been described as different. She grew up wearing boy’s clothes, known as “tomish” (tomboy). Her parents ended up understanding that she was indeed homosexual. She cannot say her parents accepted it but they tolerate it. Her mother is like a sister her because they can talk freely about everything including her girlfriends. Katlego’s dad is furniture salesman and sells beds for a living. She is helping him by being a bookkeeper. She is using her gifts to give her father some direction on his business as well. She was never in the closet and she was very free to talk to me.

She is also a very talented soccer player. She played in a team called The Fair Ladies. We used to play together. Her dream is to play one day with the national team, bafana bafana. She is dating a 17 years old girl.

I learnt from this story that your sexuality must not stop you from reaching your goals and dreams.

I am now looking forward my next story, which is about the albino homosexual who married what others would consider a ‘normal black’ woman. 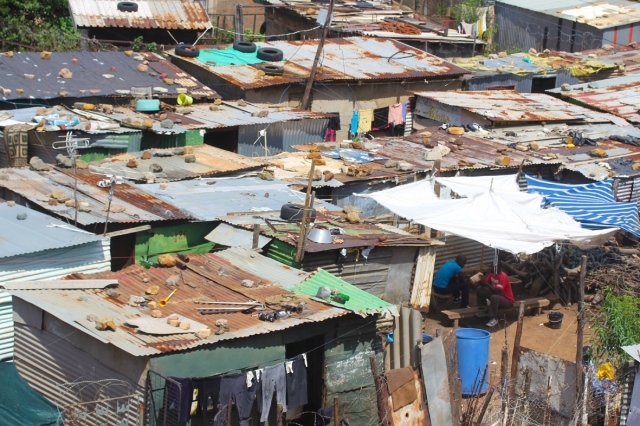 One of the informal settlement in Soweto
© Thando Methane 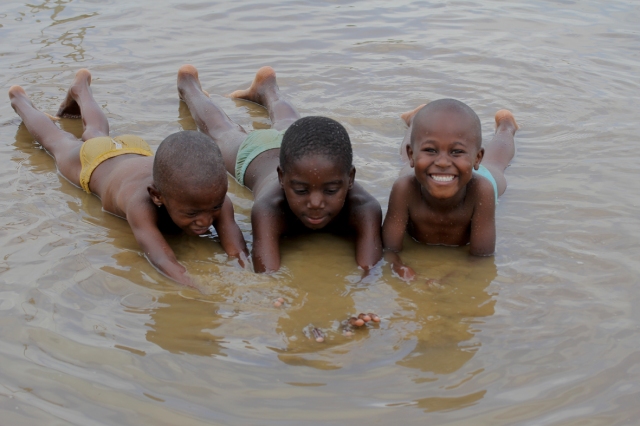 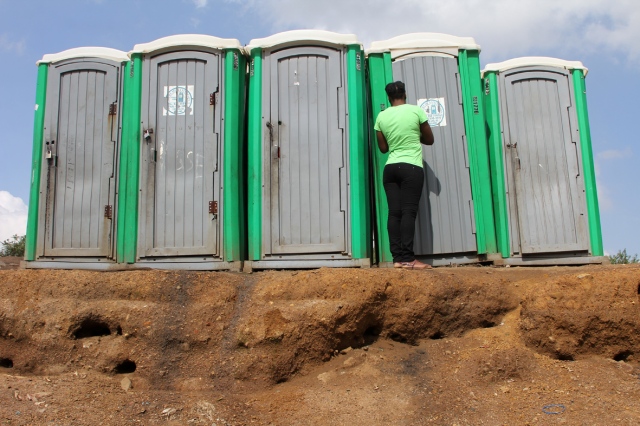 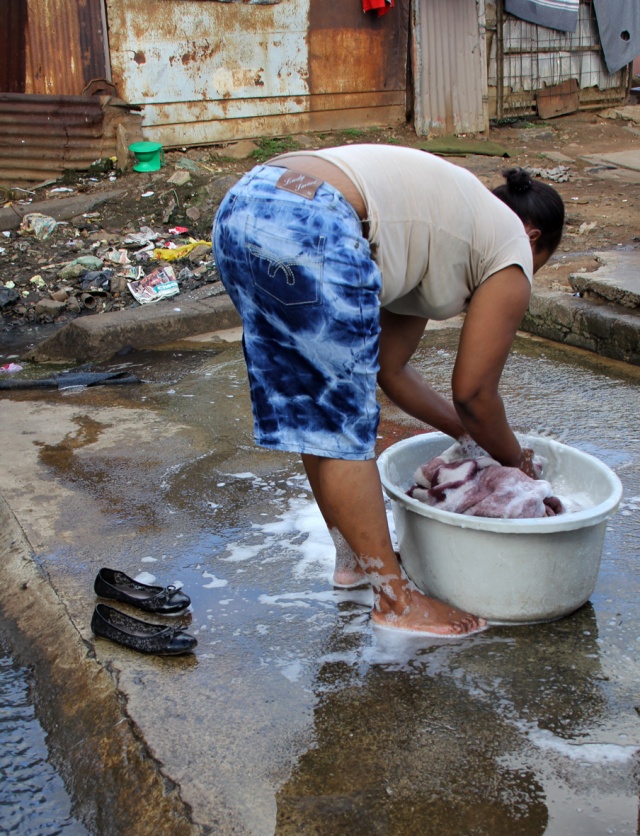 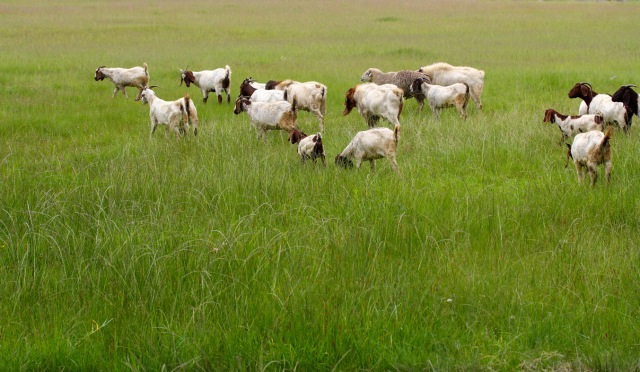 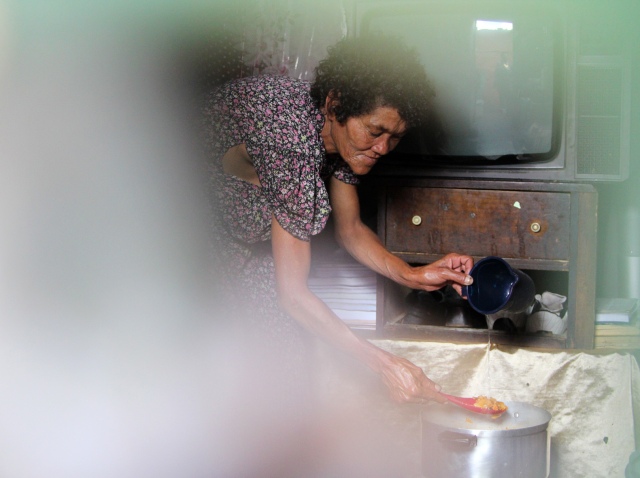 My story is about a Lady called Miriam, aka Kippie.

The colored lady  (one of South African races), and very well known in Kliptown, living with black people in this area, in a very bad situation.

She lived in one room.  It was a kitchen, bedroom – her everything. One can see the dangerous stove smoking in the middle of the room. I tried to capture the lady and the smoke, through the keyhole: it shapes like half the picture. We photographed her in April when we met her. She was welcoming to us. We had the intention of meeting her again.  Unfortunately we found out she had passed away before we could go back. She was sick and  died in May.

She told us she had two children, whom she lived with alone, after her husband left in 2004. He died 6 years ago. He was not taking any medication. ­­­­Her children were young then. Today the eldest is 17 and the youngest 13. They are both still in school. She found out she was positive for about 10 years. At the bottom of her portrait there is a picture framing four kids. We did not ask who they were. We recognised the two younger ones.

She was not working. She could not take her medication because she could not afford to pay for the transport to go to the clinics where free treatments (ARV) were delivered. Those places were too far and it was too expensive to get there. She was not taking care of herself, of her sickness.

I met with her last born child named Given, when I went back to Kliptown. He was wearing a red T-shirt that day. He was the one who passed the news to us that she was very ill. He is now living with a father he does not know because they had been separated for a long time. He grew up without him. We did a short video of him. He was crying and we ended up all crying. I learnt a lesson that tomorrow is not promised. Do not leave any gap. If there is any thing you have in mind just do it.

The last image of her and her family is that of the lock used to close her shelter after she passed.  Those images are like stamps that no one can wipe away. It will always stay there and help the children remember that this person was once alive.

This is the power of images. 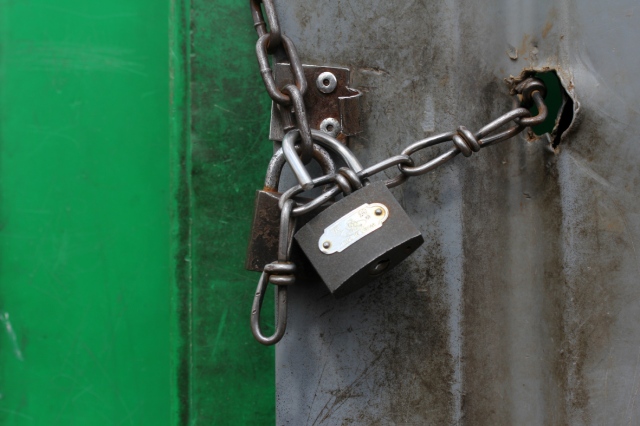 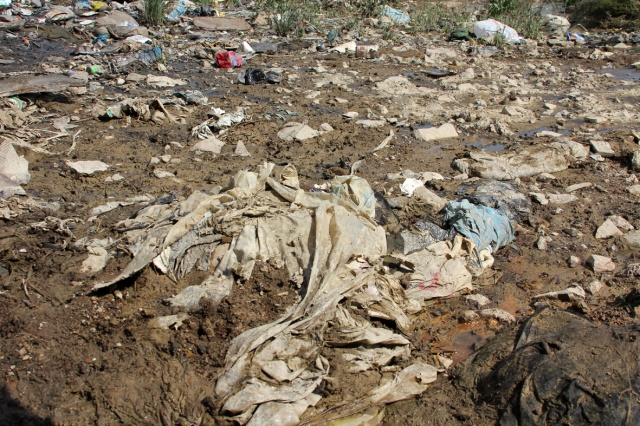 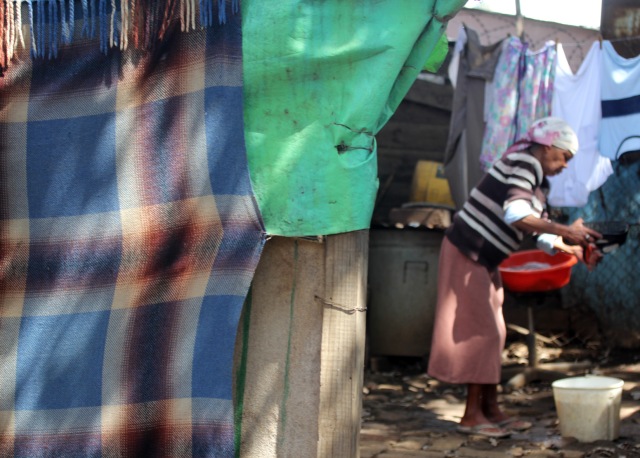 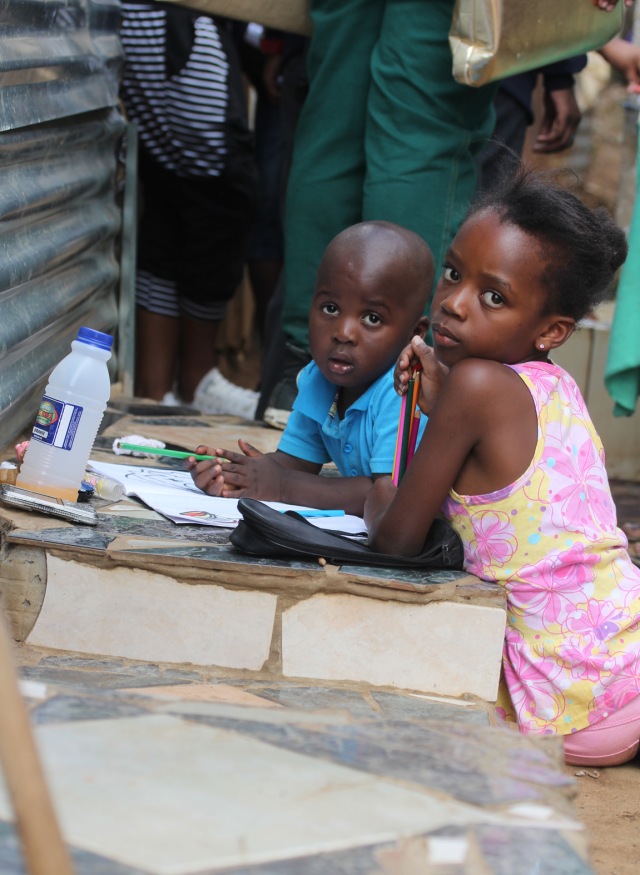 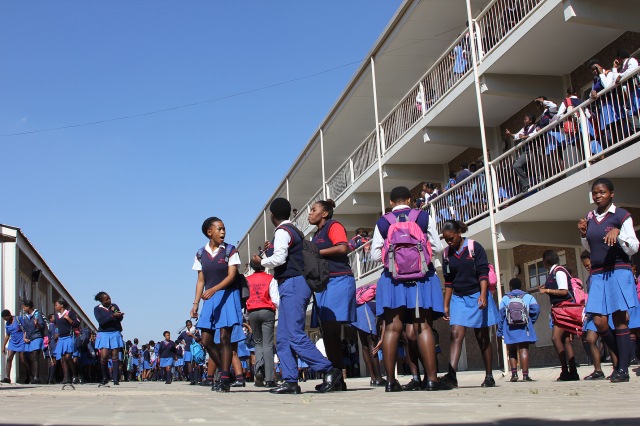 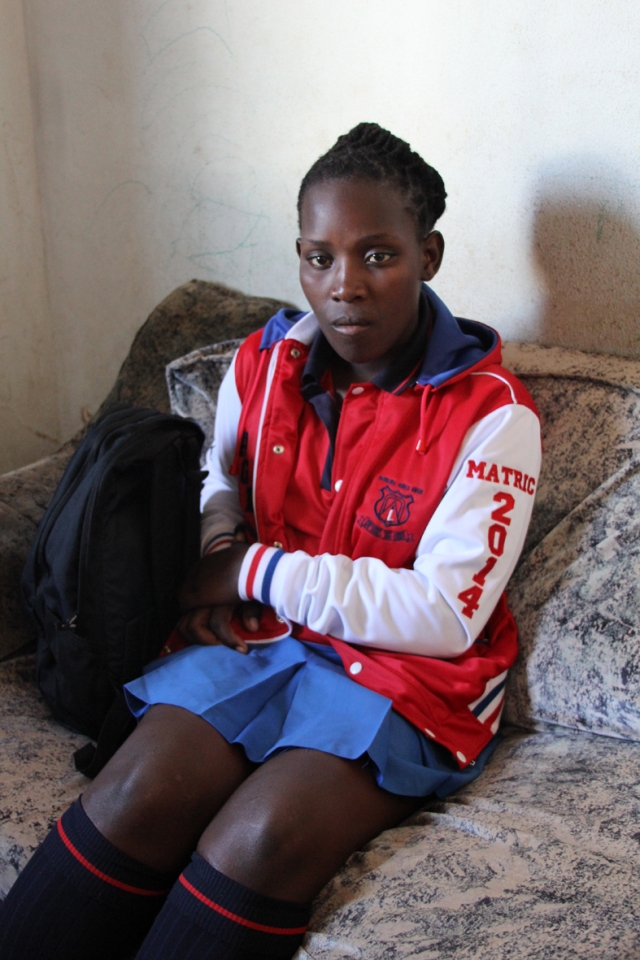 Angelo is a Grade 12 student at Aurora.
© Kamogelo Petlele

I have called my stories “Apartheid then and apartheid now”

My first story is about Angelo. Angelo has experienced so many challenges in her life. She grew up, in an Orange Farm in Soweto, living with her aunt and her aunt’s disabled child. She had to live with them because of the poverty in her original home.

One afternoon, while she was feeding the child, he suddenly fainted and could not move. He suddenly passed in her arms. She ran out screaming and calling for help but the baby could not be resuscitated.  The aunt got very angry and started to believe that Angelo killed her only child. She sent Angelo back home immediately within a blink of an eye.

To make a living, Angelo’s mother was selling chicken heads and feet on the street. She is the main breadwinner. She was already stressed out and struggling to support the whole household. One day, she had to rush to the hospital because Angelo fainted in the classroom. They discovered then that Angelo was pregnant again. The mother called a family meeting and they decided on the route of adoption.

After a few weeks the grandmother who was living with them said otherwise: “children are a blessing” she said “no matter what the circumstances, the child has the right to live with her biological mother”. She convinced the whole family including her daughter, Angelo’s mother. Angelo’s was relieved and thrilled even if she knew nothing about motherhood. Angelo gave birth to a handsome baby boy.

She is now back in school. She found a job and she works in different provinces every weekend and during school vacation, to help contribute to the household. She is struggling with her studies but she is trying to strength her mind. The father of Angelo’s child is contributing as he can. They want to get married. But Angelo’s mother disagrees with a traditional marriage because then, Angelo will belong to the stepfamily …

When we interviewed her, she reflected on her history. She struggles with the same poverty that her mother faced. She is now doing her grade 12 and she will soon be finishing school. 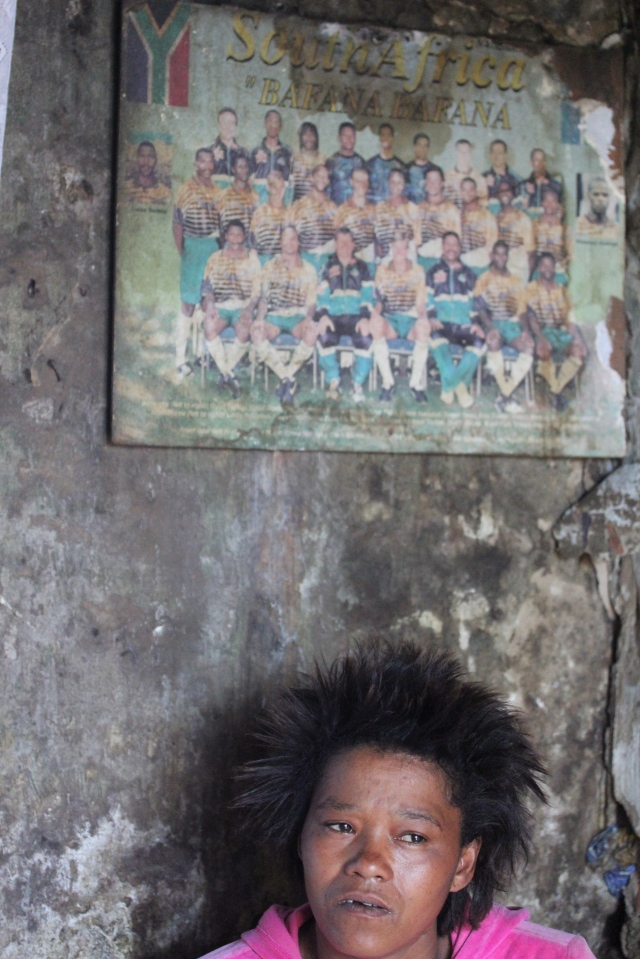 Her face tells it all
© Kamogelo Petlele 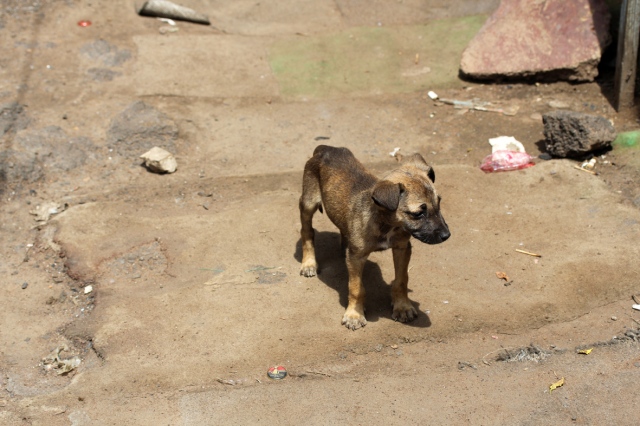 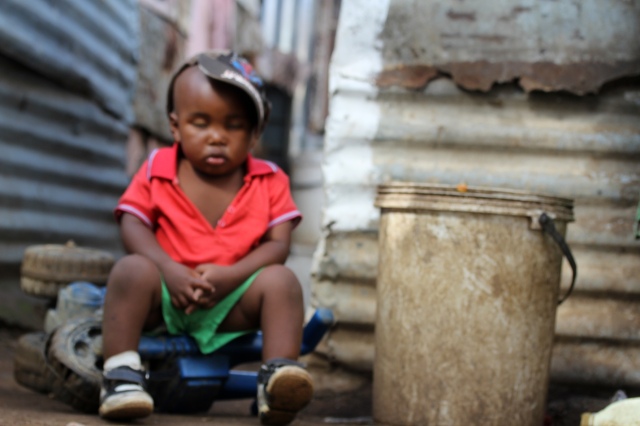 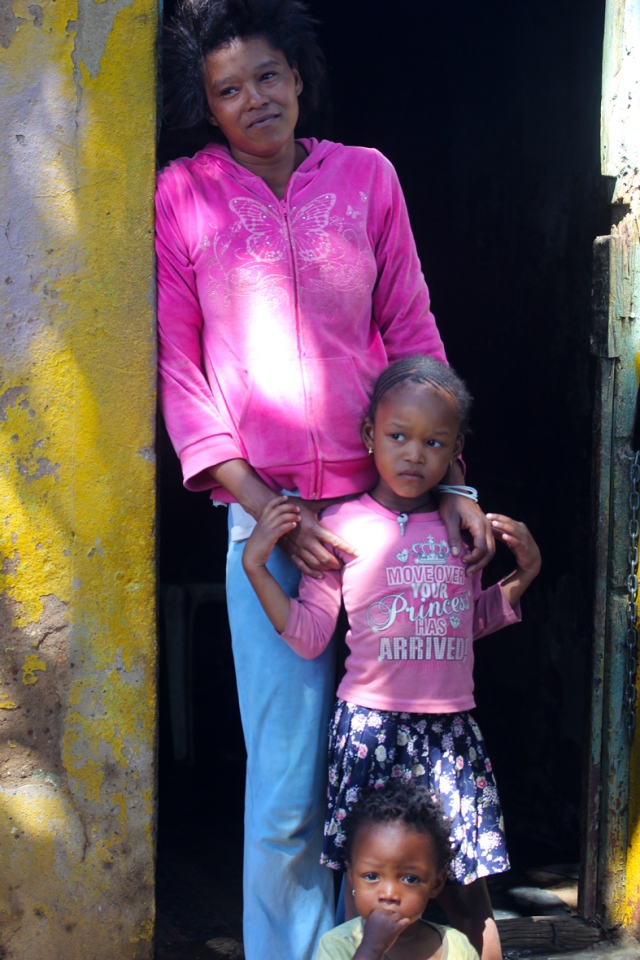 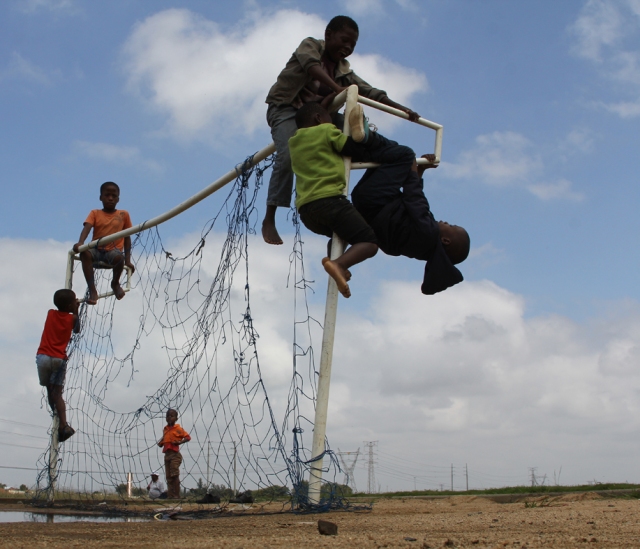 The Making of (…) With Aurora’s learners I spent three or four sessions per week since March 2014. For instance on Sunday I was in Soweto at eleven in time to teach and we finished at 5 pm. If we go out on the field, we tend to spend even more time than that. We were in Kliptown for the national election and we managed to get some video of the school as well.

In the photographs and video wanted the students to appear in the background as a symbol of their roots. We have got images at school and the community of Kliptown,which is one of the oldest townships in Soweto.  It very much reminds me of my own childhood. We lived in what was more of a squatter camp.  There are new RDP houses now. Squatter camps are birthed the idea of RDP houses.

There are so many things happening there and its always interesting to observe the daily happenings and how life unforlds there. You can see happiness. An outsider may think the community is poor but there is happiness and a lot of love there. You can see that people are very creative and use whatever they have creatively.  The children make balls from trash, people live together – it all works to starve poverty away.

To face the challenges

For some students, this was the first time to go out explore, as witnesses of their own life.  At first they were shocked and overwhelmed because they saw busy streets, trashed toilets, boxes accummulating,etc – the effects of overcrowding.

I took them into their community so that they could come face to face with the realities and challenges being faced day in, day out.

It is not easy to go out and shoot people. Sometimes, you have to face the attitude of the people. I was almost attacked by a guy while I was filming a woman cooking pap.

Most university students do not know how to interact with the world. Those from the townships understand it more. I teach students to appreciate everything. For one to better know themselves, they must accept their situation first. Learning and acceptance are good values to abide by in life.  It helps them understand the value of respecting one’s body, being careful of the relationships they get into, drinking alcohol, doing drugs or embracing prostitution as a career and ending up raising children alone.

Most of these children grew up witnessing crime and sometimes being caught up in crime. There are different generations to navigate between children of apartheid and born frees, whom they majorly are. Some of what they witness does not make sense to them because they cannot relate to the yesteryear. They are clueless when they see what they see now. They photograph individuals with visible and invisible scars and wounds.  That does not take away from the fact that the place is still bustling with energy; you can hear the music of the drums from the church and others have their chairs outside and they are just hanging out.

You can always see the beauty of it.

I want to say to the world:

Poverty still exists.  We cannot runaway from that. But from the experience of poverty, comes flexibility to face all challenges. Hope is the key to dignity and happiness,

The JOY is THERE!

I want to continue similar projects with other schools because women are a priority right now.

18 Responses to 2014 July 16: Through the eyes of young women photographers