It is Tuesday, 21st Oct. 2014 in the afternoon at Aurora GHS where guest speakers come and share expertise with young photographers.

The interaction started with a traditional icebreaker, a good meal, brought by the visitor for the photography learners at Aurora Girls High School. The learners had been waiting in anticipation to meet the guest speaker of the day, Veronica Noseda, a member of Equipe Les Dégommeuses, Paris, France. 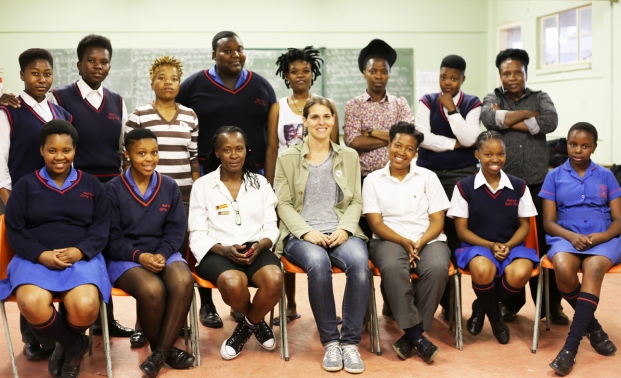 Introductions were in order and the learners were happy to hear that Veronica was impressed with their work. She liked the fact that the learners have their personal perspectives and own realities’ which is priceless and is a great start to being good photographers, writers or filmmakers.

Veronica shared with them that she spent the past 15 years living in France and it is during these years that she met Zanele Muholi, a South African activist and a photographer who initiated the meeting, and worked with her on a number of projects including the documentary which was screened minutes later.

The documentary titled “Foot for Love” by Equipe Les Dégommeuses was screened at Aurora Girls High School for the 2014 PhotoXP learners was produced during the 2012 Paris Pride week in France.
It tells the story of trip that Thokozani Football Club (TFC) took and how they spent their time in Paris.
The team is named after Thokozani Qwabe, a young lesbian victim of hate crime who was murdered in 2007.
The documentary played on the small screen laptop and the learners gathered closely. Veronica translated when people in the documentary spoke in French to ensure that the viewers understood what was going on.

Discussions followed after the screening, and then there were questions and answers.
Q1. How did the French audience react when they saw black South African lesbians parading on their streets?

VN Answer: The French were both welcoming and curious and some of them joined in after they find out what the parade was about.

Q2. Did you get support from the community?

Answer: Yes, the community showed great support and they were extremely happy to march and sing with the Thokozani Football Team.

Q3. What challenges did you face when you edited the documentary?

VN Answer: There weren’t that many challenges other than technical problems of which were overcome easily since it was a collective project, the documentary cost nothing and some of the people volunteered with their skills and some provided their video footage.
Sometimes we would post on facebook to ask for assistance with fixing technical challenges that were beyond us.

Q4. What is your organization doing for the Thokozani Football Club?

VN: Our organization worked with Thokozani Football Club to show solidarity and visibility of black South African lesbians at the height of hate crimes in South Africa. This was to show the realities of what is currently going on in SA which is not seen on mainstream television in France.

Q#5. How different or similar is the lesbian scene in France compared to the South African lesbians?

VN: We don’t know about hate crimes but some of us are also discriminated against and face a lot of homophobia as well.

Veronica went on to explain that the visual part of the documentary was to start conversations about human rights issues such as women’s rights to equality, homosexuality and so forth.

She also stressed to the learners that everything is interesting, explaining to them how important it is to observe things that happen around them, and encouraging them to take more photos and videos.
A follow up documentary titled Team Spirit was produced and directed by Thembela ‘Terra’ Dick which focuses on the lives of some TFC soccer players back in Umlazi township, Durban.
It was premiered at IFAS, Johannesburg during the International Day Against Homophobia (IDAHO).

2014 Aug. 28: Fine Artists on importance of being creative

2014 July 16: Through the eyes of young women photographers