2014 May 18: Behind the beautiful face you see is a lesbian who is torn into a million pieces

Sitting in this taxi my eyes fill with tears from thinking about where I come from. Things were easy for me while my grandmother and my mother were alive, I never had to hustle because I got everything I wanted.  I was living the life.

26 May 2002 is a date I will never forget even if want to. It is a day where my life completely changed. Losing someone you love dearly is the most painful thing one could ever experience. It is worse if it happens on your birthday. Till this day I’m not over her death. I don’t know if I ever will.

Unknown to me things were about to get tougher. It was not long after I had lost my mother, that I had to bid goodbye to my grandmother as well. Sejana se setle hase jelwe I finally understood what that meant after losing my grandmother, the only person that made me have hope after the loss of my mother. I had known that with her by my side I could tackle the world.

It’s true when they say what doesn’t kill you makes you stronger. I remember saying “Ketlo sala lemang” when  they lowered the coffin of my grandmother. I felt like digging a hole and burying myself because without her I felt like a penny with a hole in it.

Losing both my mother and grandmother at a tender age forced me to grow up fast.
I had to find the strength within me as I had no one to depend on but myself. It was time for me to make things happen with what life had thrown at me. I had to make adjustments as I had to then understand what it meant to need for the very first time, as I had moved from the world of plenty to nothing. It was not easy but I had to accept it and I purposed in my heart that I was not going be a victim of circumstances.
I started hustling just to have food for lunch at school.

I embrace myself through my love for fashion and I take out all my stresses through my God given talent – which is soccer. It is true what they say that “God has a plan for all of us” and I believe that.
Through all my soccer achievements He is the one who made them possible.  I started playing soccer at the age of 9 years on the dusty streets of Katlehong, where I grew up playing with boys. In Grade 3 I joined an all-boys soccer team called Two for Joy.
The love for football grew as I continued to play. I never got any special treatment just because I was a female. Instead they kicked me hard until I learned how to kick as hard as they did.

After the passing of my grandmother I moved to KwaThema. I joined an all-girls team called This is where I got my first big break. Coach Joseph “Skheshe” Mkhonza saw potential in me. Then he decided to take me to trials for Gauteng province. My experience of playing with boys came in handy as I feared no girls and tackled anyone that came my way like I tackled the boys I used to play with. Being selected for the Gauteng team and being named captain was a dream come true for me. I saw the light, I believed I was good enough.

That same year I saw myself flying off to France to represent South Africa in the Tour de France tournament. It was surprising and shocking how I had achieved so much in a short space of time. From being a nobody to being respected by your fellow team mates and opponents is great achievement and feeling.

I had never felt so good. My confidence soared and I believed that anything could happen if I put my mind and my heart to it. For a moment I forgot all my problems and I let soccer make me happy. Soccer became the drug I needed. When I was called up for the national under 17 team, I wished my grandmother could witness that moment.   I could not believe I was wearing the green and gold track suit on my first day in camp. It was like a dream. Being promoted to the national under 20 made me feel wanted, like I was needed to assist the team. There is no greater feeling than when I am inside the soccer field, should it be as a defender or as a goalkeeper.  I feel at peace, I feel like the world is right on the middle of my palm.

My love for football could not fade over night or ever even.  It runs through my veins. I take pride in being a no nonsense defender, and a hard tackler. The fact that my late grandmother passed on knowing and encouraging me to play and never stop playing, propels me to play with all my heart. Every time I step into the soccer field I play for her and my mother because I know they are smiling down at me and most of all I play for myself. Contrary to what people believe, my lesbianism did not influence me to play soccer. I became a soccer player before I even knew I was lesbian.

Soccer is not the only thing I am passionate about. For as long as I can remember, I have always loved dressing up and looking good, whether I go somewhere or not.
I guess I took it from my mother who was always well groomed and she loved clothes too. It is hard to define my style as I wear anything I think will look good on me. From being a sporty person I am, I used to love sportswear more than anything. But as I grow up my eyes opened. I saw there was more to life than sportswear. As time went by my interest in fashion grew beyond just sportswear. 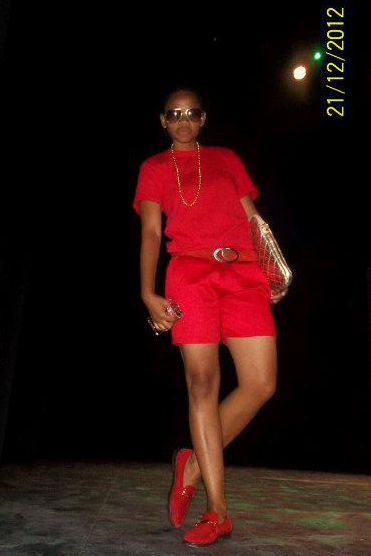 Dressing up is therapeutic for me, it eases my pains. I feel like it brings me closer to my mother as she loved fashion too. I am not defined by the clothes I wear and the price-tag on them. I simply love style and have great taste no matter the price. Being nominated for the best dresser award at the LGBTI Recognition Awards 2012 was a stepping stone for me. It opened my eyes, letting me know that people adore my style. That is when I knew I was doing something good. I want to be the voice of all the fashion loving lesbians in Africa and the world as a whole. I believe I can break the norm and show the world that lesbians also have a voice.
People always evolve, things evolve so it is time fashion did too.

‘Leptie’ the fashionista, soccer player… on vacation at the Durban South beach in March 2014.

I am hoping all the designers one day will take note that they need to expand their male range to accommodate lesbians too. There is nothing more frustrating than going shopping but failing to find the right size just because the male cuts are too big. Through me, designers can have a huge following as my fellow lesbians love looking good like myself and I know for a fact they will sell.

People break new grounds everyday, it’s about time that lesbians did the same and stopped conforming. I refuse to be seen under dressed as you will never know who you will meet while you are out. Every occasion is an opportunity to dress up and present yourself in the best possible manner. Appearance speaks for you before you speak.

As I would say “everyday is a fashion show and the world is my run way”.  That is the creed that I live by and dressing up is not a hobby but what I love.  They say dress up like you going to meet your worst enemy everyday.

You may see me dressed well and think that my life was easy.  Well allow me to tell you that behind the beautiful face you see is a lesbian who is torn into a million pieces, who is still in need of her mother and grandmother’s love and guidance. However life goes on.  I press forward gracefully for the love of soccer and fashion. This is my journey.

16 Responses to 2014 May 18: Behind the beautiful face you see is a lesbian who is torn into a million pieces